An armored amphibious vehicle stuck in a rut along a Camp Pendleton road nicked a hidden gas line during a... 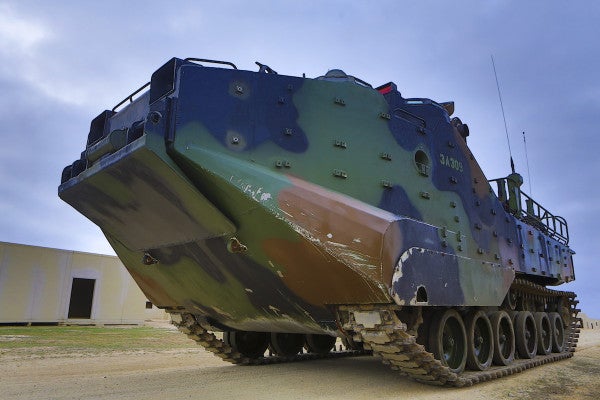 An armored amphibious vehicle stuck in a rut along a Camp Pendleton road nicked a hidden gas line during a September exercise, engulfing 14 Marines and a sailor in a fireball that grew into a 20-foot pillar of flames, according to an official report released by the Marine Corps on Monday.

While its driver tried to extricate the assault amphibious vehicle — nicknamed an “amtrack” in the Marines — from a ditch, a backfiring engine sparked the gas detonation on the morning of Sept. 13 along Range 301 Road near the Bravo 3 “combat town” training site, 1st Marine Division investigators concluded.

“They attempted to get unstuck several times and then I heard a pop sound and then it exploded,” wrote an unnamed Marine in an official statement included in the heavily redacted 210-page report.

Four amtrack crew members from 1st Platoon, A Co., were burned as were nine Marines and a Navy corpsman from C Co., 1st Battalion, 1st Marines, which was conducting pre-deployment war games when another vehicle’s tread got tangled in communications wire, forcing them off the road to let smaller trucks pass.

“Many of the facial and hand injuries might have been lessened if Marines had been wearing flame retardant clothing on those affected areas,” wrote Maj. Gen. Eric M. Smith, the commander of 1st Marine Division, on an endorsing document attached to the report.

Smith noted, however, that the amtrack crew wore their special protective equipment and still suffered burns. Those flames were described by unnamed witnesses in the report as “rolling” and like a “blowtorch” in intensity.

Temperatures were so high that the gas pipe welded to the vehicle’s steel tread. Photographs included in the report show recovered weapons that appear melted in places, with warped barrels and missing metal pieces.

Along with the stream of natural gas, about 170 gallons of diesel fuel also fed the fire, which consumed the entire steel roof and the right side of the armored vehicle.

One of the unidentified witnesses recalled seeing a Marine with “very bad burns to his upper body which was exposed through his tattered blouse. One was lying on his back and the other was on his knees looking at his hands. Both were conscious and screaming.”

Six paramedic units, three brush fire engines, a ladder truck, five aero-medical ambulances and a firefighting aircraft rushed to the mishap, but the blaze wasn’t extinguished until more than six hours later, after workers closed off the gas line.

The report revealed that the officials planning the exercise did not know that a Marine D8T bulldozer three months earlier had ruptured the same line about 90 feet north of the Sept. 13 accident.

“Once the dozer was out of the rut, the operator shut the dozer off, heard a hissing sound and cleared all personnel from the area,” according to a separate report by Camp Pendleton’s Range Control office that was attached to the 1st Marine Division probe.

The gas line apparently cut by both vehicles was painted gray and blended in with earth that had eroded during winter storms, exposing the pipe; three nearby signs that might have warned of an underground hazard were faded by the sun and overgrown with weeds, investigators found.

“With that said, even if the signs had been clearly readable, the average person would interpret them to mean that no digging should occur in the vicinity of the gas line, but that driving in the area would be safe,” Smith wrote.

The Range Control report noted that the troops had slept only about seven hours over two nights of training before the accident occurred, indicating sleep deprivation might have contributed to the calamity.

A separate investigation conducted by Camp Pendleton-based Marines Corps Installation West has not been released.

The probe released Monday did not assign blame to any Marine or sailor. It also did not address who owned or was responsible for maintaining the gas line.

In September, officials at San Diego Gas & Electric, which supplies natural gas to the base, insisted it was not their pipe and Camp Pendleton officials have declined comment.

SDG&E; is the target of a lawsuit filed Dec. 5 by attorneys representing one the Marine victims, Cpl. Carlos Tinoco. He and his wife Maria allege the gas utility was negligent because of substandard installation of the pipes on base.

Tinoco suffered third-degree burns that have permanently injured him, according to the lawsuit. He was one of 13 troops rushed to civilian hospitals after they escaped the fire.

“I am grateful to the medical staff at Brooke Army Medical Center in San Antonio, Texas, the Burn Center at the University of California, San Diego, the Burn Center at the University of California, Irvine, Scripps Memorial Hospital La Jolla, and Naval Hospital Camp Pendleton for their expert and compassionate care for our Marines and Corpsman,” said Smith in a written statement provided to The San Diego Union-Tribune. “The injured Marines and Corpsman have all been released from the hospital, but several are still receiving care for their burns.”