Unsung Heroes: The Harrier Pilot Who Picked Up A Rifle And Ran Into Combat 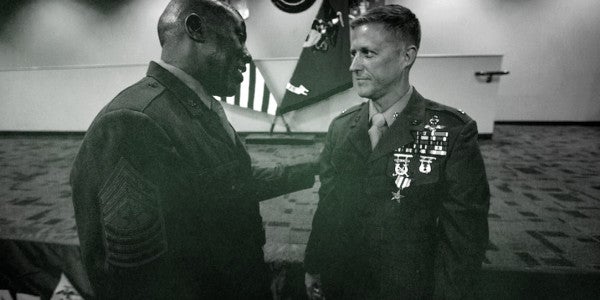 On the night of Sept. 14, 2012, a group of 15 Taliban fighters split into three five-man teams and snuck through the outer perimeter of Camp Bastion, a sprawling compound in Afghanistan’s Helmand province that served as a base of operations for nearly 30,000 NATO troops, most of them British soldiers and U.S. Marines. Their attack prompted an immediate battle on the flight line. Initiated when the insurgents began firing rockets at aircraft, the fight drummed on through the night in violent bursts as the heavily-armed insurgents maneuvered in the darkness, hellbent on killing as many Western troops as they could. The plan, as later explained by one of the insurgents, was to kill them in their sleep.

About thirty minutes into the attack, Marine Maj.Robb McDonald, a Harrier pilot and the executive officer of Marine Attack Squadron 211, 3rd Marine Aircraft Wing (Forward), was jarred awake by the explosions and gunfire. Like many of Camp Bastion’s inhabitants, he was confused. A ground assault on a NATO base that size was almost unfathomable. But McDonald borrowed some clothes and equipment and began to run the mile or so from the barracks to the airfield in somebody else’s boots that were too small for his feet, unaware that he was heading into a battle that would ultimately cost the lives of two Marines, wound many more, and inflict the largest loss of American aircraft since the Tet Offensive.

By the time McDonald arrived at the besieged maintenance building on the edge of the airfield, his longtime friend and commander, Lt. Col. Christopher Raible, had already been killed by a rocket-propelled grenade and several more Marines had been wounded. McDonald swapped his pistol for a rifle and some magazines, and then rallied what air wing Marines he could for a counterattack across the flight line. The Marines, none of whom were infantrymen, needed to protect whatever aircraft hadn’t been destroyed by the insurgents yet. Meanwhile, pilots scrambled into action and soon attack helicopters began lifting into the smoke-filled sky.

Adding to the confusion was the fact that the insurgents were dressed in American uniforms. Without help from the Marines on the ground, the pilots couldn’t differentiate between friend and foe. After directing some Marines to cover his movement, McDonald turned a corner en route to the flight line and found himself alone with four of the disguised insurgents. They were about 30 feet away. One was armed with a belt-fed machine gun. Before becoming a pilot, McDonald had completed three deployments as a forward air controller with Marine special operations. He was no stranger to ground combat. He raised his rifle and shot the machine gun-toting Talib in the face.

After a brief firefight, during which McDonald sustained shrapnel wounds, he sprinted back to his squadron’s headquarters building. He had a plan. Instead of fighting the insurgents toe-to-toe, he’d do what he had done countless times as a forward air controller: call in close-air support. The Huey pilots circling overhead hesitated when McDonald radioed in a request for them to strafe the insurgents, who were “danger close” to the headquarters building. But McDonald cleared them to engage, and a lone Huey swooped down and obliterated the four Taliban fighters on the tarmac.

A fifth Taliban fighter was lying wounded on the tarmac nearby when a British quick-reaction force arrived. They wanted to wait for reinforcements before approaching the downed insurgent, who was armed with an AK-47 and grenades, but McDonald had another idea. For the second time that night, he raised his rifle and killed a man, who became the 14th Talib to die that night. Only one of the insurgents was taken alive — a 22-year-old Afghan named Mohammed Nazeer, who was the group’s commander. He was later convicted and sentenced to death by an Afghan court.

McDonald’s heroics were just a small slice of the battle that raged on Camp Bastion that night. Across the airfield, Marines and British soldiers, most of them support personnel, fought valiantly to repel the attack, which completely destroyed six Harrier jets and a C-130, and racked up a total of $200 million in damages. But the human toll was far worse: Two Marines — Raible and Sgt. Bradley Atwell, an avionics technician — had been killed and 17 coalition members had been injured.

A year later, in Sept. 2013, Maj. Gen. Charles Gurganus, who was the commander of Helmand at the time of the attack, and Maj. Gen. Gregg Sturdevant, the region’s Marine aviation commander, were both forced into retirement for failing to adequately secure the base. Meanwhile, that same month, McDonald was awarded the Silver Star for his actions during the battle. At the award ceremony, I Marine Expeditionary Force Commander Lt. Gen John Toolan lauded McDonald and the other Marines of 3rd Marine Aircraft Wing for stepping up in the absence of combat troops. “For those of you that aren’t aware of the fact that every Marine is a basic rifleman,” he said. “Those guys proved it in spades on that particular day.”