UNSUNG HEROES: The Sgt 1st Class Who Led The Way In An Unarmored Humvee In The Battle Of Sadr City 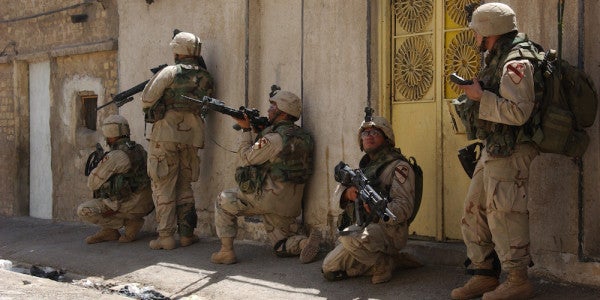 April 4, 2004 — the first day of the fighting in the Battle of Sadr City — a day that lives in the hearts, minds, and souls of every War Eagle from 1st Squadron, 2nd Armored Cavalry Regiment. That fateful evening began like the end of a classic war movie. That day, The War Eagle Squadron was in the process of relinquishing command of Baghdad’s Tisa Nissan and Sadr City districts to 1st Cavalry Division. We were in the process of returning home after having been in Iraq for a year. Sadly, unforeseen circumstances that afternoon in Sadr City required we War Eagles to re-take command of the battle space.

There were many unsung heroes that evening; I’m not one of them. Some of them are no longer with us, and some are. One noncommissioned officer in particular is a man I am proud to call friend — retired Sgt. 1st Class Joe Harris, aka Old Man.

I spent much of the battle with the War Eagle quick reactionary force, overseeing casualty evacuations and ensuring that the enemy did not use the civilian rush out of Sadr City to mask their escape. That first night of fighting ended around 3 in the morning. As I strolled into the squadron tactical operations center, my friend, Capt. Billy Goin, informed me of the most incredible act of bravery, now legend, I had ever heard.

To understand the legend of Harris, one must understand how the War Eagles rolled during our year in Baghdad. We fought in fiberglass Humvees with no doors. When War Eagles’ commander, Lt. Col. Mark Calvert, made the decision for us to enter the fight that evening, some of the leaders commandeered 1st CAV’s Bradley Fighting Vehicles. But the mass majority rolled in their Humvees.

During the battle, Harris led one of his scout sections into Sadr City. They eventually linked up with a Bradley team that had just recently received heavy enemy AK-47 and rocket-propelled grenade fire from the rooftops. Harris jumped out of his Humvee and told the Bradley team leader to lead the way through the narrow street. The team leader did not want to lead the way; he wanted his two Bradleys to follow Harris and his section through the narrow street. This report did not sit too well with Harris, who became very agitated with the Bradley team leader’s lack of gumption. But rather than argue, Harris made a command decision. He jumped back into his Humvee and led his section through the tight road.

The road on which Harris led his section was about 30 feet across and had three-story townhouse style homes lined on both sides. Though they were risking their lives, Harris knew that moving down this particular road was the only way they could enter the fight where they were needed.

As Harris led the way, the Bradleys positioned themselves in the rear of his formation. Much to the surprise of Harris and his men, not a single shot or rocket was fired from the rooftops or from any of the homes. The soldiers all thought that the lack of enemy contact was very odd, but they definitely did not complain.

With Harris and his men in the clear and out of the line-of-site of potential enemy fire, it was the Bradleys’ turn to move through the alleyway. The sky lit up like the 4th of July. The Bradleys, which were now in the middle of the road, received constant direct rocket and small-arms fire from the rooftops until they pushed through and out of the danger zone.

Harris’ ability to lead, despite the odds, is a testament to every War Eagle, especially those of us who served during the initial invasion of Iraq. That evening tested our mettle, and Harris is the epitome of who we all were as leaders and war fighters. His quick thinking and ability (and willingness) to not allow fear to control his actions and decisions exemplifies what a truly distinguished unit the War Eagle Squadron was under Calvert’s command. Harris’ leadership that fateful evening is a clear illustration as to why major Iraqi newspapers referred to the War Eagles as “the Bastards of Baghdad.”