UNSUNG HEROES: The Mortally Wounded Soldier Who Attempted To Save Teammate From 50-Person Ambush 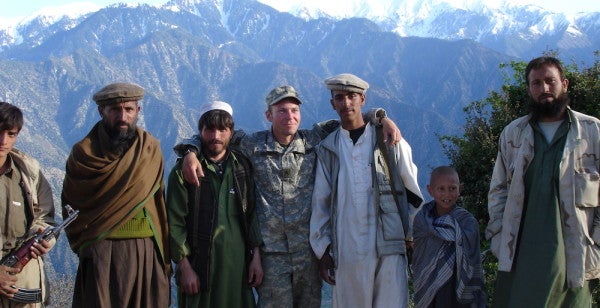 On June 18, 2006 Army Sgt. 1st Class Jared Monti led 16 fellow soldiers on a mission up a mountainside into enemy territory near Gowardesh in northeastern Afghanistan.

The soldiers, all forward observers, were on assignment as part of the 10th Mountain Division to quickly establish an over-watch for troop operations in the valley below. The group burned through its supplies after continuous delays, and despite risk of compromise, had to have food and water flown in by helicopter on the night of June 20.

Related: This Corporal Died Leading His Marines Until The Very End

Just before dawn the next day, the group was besieged by enemy fire. The soldiers, which chose to sleep in separate groups along the ridge, was split when a 50-person ambush began its barrage.

First, the team lost Sgt. Patrick Lybert. Meanwhile, Pfc. Derek James took a bullet to the back. Then, 22-year-old Pvt. Brian Bradbury, isolated from the majority of the group, tried to run back to the main position, but fell to rocket-propelled grenade fire. As he laid wounded on the open ground, the enemy was advancing.

The teammates tried to keep Bradbury talking as the firefight raged all around.

Monti had already called in air support, but there wasn’t time if he wanted to Bradbury to survive. Also separated from the main group, he decided he had to save his teammate at whatever cost.

As the rest of the group laid down heavy cover fire, Monti made two unsuccessful attempts to reach Bradbury behind rock coverage. On the third, he nearly made it in open space, but was brought down by another RPG and a hailstorm of bullets.

Fellow teammates recall that his scream was like nothing they’d heard before, and then silence, according to Stars and Stripes.

Just a few minutes after the fighting ceased, helicopters dropped several bombs, leveling trees and sending shrapnel all around the group. Once the fighting subsided, the 159th Air Ambulance Medical Company out of Wiesbaden, Germany, took James up first.

The medic, Staff Sgt. Heathe Craig, then went down to get Bradbury. But the steel cable bringing them up snapped, and both were killed on impact.

A few days later in Bagram, the thirteen survivors mourned the four soldiers lost in the ambush.

For his bravery in attempting to rescue Bradbury and his team, Monti was posthumously promoted to sergeant 1st class and awarded the Medal of Honor on July 24, 2009.

Monti’s citation would later read, “With complete disregard for his own safety, SFC Monti moved from behind the cover of rocks into the face of withering enemy fire. SFC Monti’s acts of heroism inspired the patrol to fight off the larger enemy force.”

After enlisting in the Army in March 1993, Monti went to basic training at Fort Leonard Wood, Missouri, between his junior and senior year of high school. Upon graduating, he switched over to active duty and completed his initial military training at Fort Sill, Oklahoma. He then continued his training as a paratrooper with the 82nd Airborne Division.

After graduating from basic and AIT he was stationed at Fort Riley, Kansas. Monti was then assigned to the Korean Peninsula as part of the 1st Battalion, 506th Infantry Regiment. After departing, he was transferred to Fort Bragg, North Carolina. He went back once more to Korea before being stationed at Fort Drum in New York.

Author Len Sandler wrote a biography on Monti called “See You on the High Ground: The Jared Monti Story,” published in 2014.