UNSUNG HEROES: The Soldier Who Rode A John Deere ATV Into Battle

On Nov. 1, 2010, a young Afghan approached Sgt. Felipe Pereira and his team on a shiny motorcycle near the... 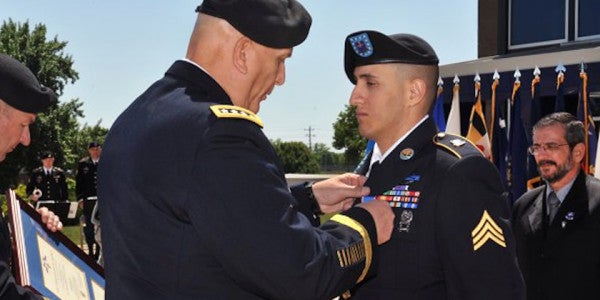 On Nov. 1, 2010, a young Afghan approached Sgt. Felipe Pereira and his team on a shiny motorcycle near the end of a daily dismounted patrol. Pereira checked his pockets and bike for explosives, the soldier later told Stars and Stripes, and finding nothing, shook the rider's hand. The calm and collected Afghan smiled at Pereira, and as the squad turned away toward the base, the motorist detonated explosives hidden on his vehicle.

Pereira, a team leader with Alpha Company, 1st Battalion, 502nd Infantry Regiment, 101st Airborne Division, had a weird feeling that something would go wrong that morning on their patrol. He decided to alter their path that usually ran along the perimeter of the expanse that separated their combat outpost from the city of Senjaray in Kandahar Province, Afghanistan. Winding through the middle, the patrol crossed the expanse safely and were headed home when the motorist approached.

He responded well to Pereira’s hand signals, and when the explosion occurred, the soldiers assumed it was from an improvised explosive device, not the young Afghan who politely cooperated moments before. They would later learn otherwise.

Two patrol members were killed instantly and four others sustained severe injuries. Pereira himself received shrapnel wounds to his spleen, liver, and left lung, according to his citation.

After the explosion, Pereira looked down to see his legs bleeding, riddled with holes. Within seconds, Taliban fighters surrounded the surviving men on three sides and opened fire.

The outpost was just behind them, but the Taliban were everywhere; dodging through trees, and taking pot shots from the market. Out of necessity, Pereira ran inside the base and found a John Deere Gator used to haul trash.

“That thing was bare bones,” Pereira told Stars and Stripes. “It was nothing you would ever take to combat whatsoever.

His lung began to collapse as he hurried to the base, choking him from the inside, but Pereira refused medical treatment because his men were alone, wounded, and needed help.

Struggling to breathe, Pereira rode the John Deere back into heavy enemy fire to provide a chance to evacuate his wounded soldiers, his citation recounts. Making it within 20 meters, he provided cover fire from his seat as his fellow soldiers loaded two of the wounded aboard. Bullets ricocheted off the vehicle, narrowly missing Pereira.

He made it back to the outpost with the wounded where medics waited to receive them. He then quickly returned with the vehicle to the battle to evacuate the remaining wounded men.

Once Pereira made it back inside the base with all his men safe, he took his helmet off and collapsed.

Pereira would recover from his injuries and return to his patrol duties a month later.

“I had people tell me, ‘Man, you’ve already paid your dues, go home now,’” Pereira told Stars and Stripes. “That was one day. I don’t want to be measured for the rest of my life against one day.

According to his Army biography, Pereira was born in Brazil and moved to the United States for college when he was 17 years old. Pereira enlisted in the Army in 2009, three years after earning a college degree. He would become a U.S. citizen in February of 2010 and deploy to Afghanistan the same year. Six months later, Pereira earned the second-highest commendation for valor in combat, the Distinguished Service Cross, for his actions that day.

“I couldn’t care less about my medal,” Pereira told Stars and Stripes. “I’m tremendously proud of it, but if there’s one thing we could take out of this entire thing is the sacrifice of those who never came back. They’re the real heroes.”