US Aircraft Carriers Are Screwed In A Real Battle, According To Defense Analysts

When Dubya wanted to celebrate a “mission accomplished,” he flew in an S-3 onto a carrier hardtop. When Trump wanted... 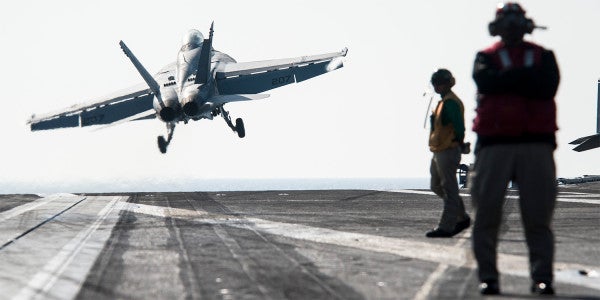 When Dubya wanted to celebrate a “mission accomplished,” he flew in an S-3 onto a carrier hardtop. When Trump wanted to project American military strength, he spoke on the hangar deck of the newly christened carrier USS Gerald Ford. “Where are the carriers?” the old president’s line goes. Nobody comes close to matching America’s 10 operational floating airports, and the current administration has announced plans to add at least two more carriers soon.

There’s just one problem: A growing chorus of defense analysts says that in a real maritime battle, U.S. aircraft carriers are totally fucked.

“Beyond a shadow of a doubt, a carrier is just a target,” one former career Pentagon analyst told Reuters in a depressing investigation of flattops’ vulnerabilities that the news service published Thursday.

Over the past two decades, as the United States cobbled together maritime and littoral strategies based on carrier airpower, potential adversaries have fine-tuned cheaper antiship missiles and torpedoes that can turn an $11 billion behemoth city at sea into a burning patch of ocean:

The new weapons include land-based ballistic missiles, such as China’s Dong Feng-21 anti-ship missile, which has a claimed range of 1,100 miles (1,770 kilometers) and moves at 10 times the speed of sound. Certain Russian and Chinese submarines can fire salvoes of precision-guided cruise missiles from afar, potentially overwhelming carrier-fleet anti-missile defense.

Russia, China, Iran and other countries also have so-called super-cavitating torpedoes. These form an air bubble in front of them, enabling them to travel at hundreds of miles per hour. The torpedoes cannot be guided, but if aimed straight at a ship they are difficult to avoid.

A 2015 Rand Corporation report, “Chinese Threats to U.S. Surface Ships,” found that if hostilities broke out, “the risks to U.S. carriers are substantial and rising.”

Missile and torpedo threats to carriers are nothing new — they’re intimately familiar to anyone who ever had to work on an Aegis-equipped ship, or just read Tom Clancy’s “Red Storm Rising” at some point since 1986. But as analysts tell Reuters, hostile nations can buy more than 1,200 carrier-killing missiles for the cost of one Ford-class flattop. That’s a lot more airborne threats than even a carrier group full of smaller “missile sponge” ships can defeat.

That leaves critics wondering if the costly carriers are worth the return on investment. Reuters points out that the USS Ford, which Trump praised as an example of “American craftsmanship at its biggest, at its best, at its finest,” has yet to be commissioned in three years afloat, owing to cost overruns and expensive problems with its power plant and arresting gear, among other issues.

Another issue is that, since the decommissioning of the F-14D, carriers have relied on strike aircraft like F/A-18 Super Hornets, whose closing speed and maximum range are inferior to dedicated air superiority fighters. The much-ballyhooed replacement jet, the F-35C Lightning II, is another multi-use fighter like the Hornet, with similar range shortcomings. That complicates the task of intercepting airborne threats to a carrier group at a safe “standoff” distance.

“What they (the Navy) haven’t done yet is to design and fund a strike aircraft that can fly 1,000 miles, drop its bombs and come home,” Bryan McGrath, a carrier proponent at the Hudson Institute, told Reuters.

For his part, Trump vowed that “a lot more is coming” to “give the men and women of America’s armed services the resources you need to keep us safe.” And for him, that means beefing up the nation’s beautiful, if vulnerable, carriers.

“You stand on that deck, and you feel like you're standing on a very big piece of land,” the land-developer-turned-commander-in-chief told the Ford’s sailors.