I Was The US Ambassador to Afghanistan. The Military Can’t Fix This Mess Alone

President Trump’s June 13 decision to delegate authorities on troop levels and operations in Afghanistan to Secretary of Defense James... 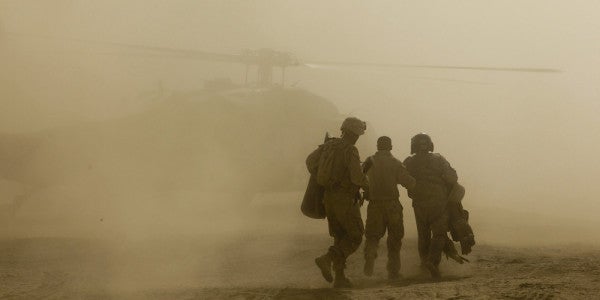 President Trump’s June 13 decision to delegate authorities on troop levels and operations in Afghanistan to Secretary of Defense James Mattis set the correct and essential condition for beginning to improve security and to enhance the prospects of success in Afghanistan. It was taken in the context of doubts in some circles around the president and in the commentariat that continued U.S. commitment to Afghanistan is worth the candle, and that the relatively small number of additional U.S. and coalition forces under discussion will in fact turn the tide. But if the United States couldn’t win with one hundred thousand troops in the fight, what difference will another couple thousand make now?

The answer begins with understanding the past and present military missions, with recognizing that, despite mistakes made and outstanding issues, there have been considerable achievements, and with developing a strategy. A worthwhile strategy must aim all the instruments of U.S. power and influence at prevailing over Islamist terror and the Taliban. If the administration gets that right, with a realistic comprehension of what is needed to win this conflict, America and its allies will be on much sounder footing in Afghanistan and in the global confrontation with Islamist terror. There is no guarantee that the United States can “win” in Afghanistan, but it is quite clear that it can lose, with grave consequences for American security.

The president’s national-security team, in the first rigorous and structured security-policy review of this administration, has looked at both upgrading the military effort and a revised strategy for addressing Afghanistan in its regional context. Even at peak U.S. and coalition troop deployments in Afghanistan, the military mission was not to defeat the Taliban. It was to push it from the field in key places, degrade its operations, and provide the time and space for the Afghan security forces to assume responsibility for protecting the Afghan people. The U.S. combat mission ended in 2014. Unfortunately, the subsequent effort to support Afghan forces was handicapped by uncertainty about U.S. commitment, and by limited authorities for U.S. commanders to bring critical air and intelligence capabilities to bear as the Afghans took over the fight—in addition to serious deficiencies on the Afghan side.

The purpose of the proposed additional forces and authorities is not to defeat the Taliban but to improve security through more effective training and assistance to the stressed Afghan security forces. Since 2014, they have done virtually all the fighting against the Taliban and are deeply involved with American forces confronting ISIS, Al Qaeda and other international threats. Mattis now has the authority to adjust the size of the force as needed, and to give his commanders “more agility” in conducting operations. This is long overdue and should lay the foundation for the improved security and stability Afghanistan so badly needs.

Military force alone, however, will not produce “victory.” It is one of many instruments for implementing a revamped strategy for Afghanistan. The renewed military effort, Mattis has indicated, will be embedded in a broader strategy. Troop levels will apparently be defined not by numbers and timelines but by missions and conditions, so that continued withdrawals of U.S. forces are based on Afghan success. Importantly, the emerging strategy should have as its goal the termination of the conflict by the achievement of a political settlement on terms acceptable to the Afghan people and adequate to the security requirements of the United States and its international partners, who have given so much to this struggle. That would qualify as a “win”.

To pursue such an approach would not be throwing good money after bad. It would be looking to preserve return on investment in the interests of American security. Seeking to end the conflict, with an enduring military commitment as the foundation of an integrated multifaceted and multilateral effort, would signal a qualitative shift away from the constraints and timelines favored by President Obama. This would not imply large increases in military forces; indeed it has been widely recognized for some time that there is no military solution in Afghanistan.

Winning will require impacting the calculations of all parties involved and marshaling the instruments of military, political and economic power at the disposal of the United States and its international partners. It will also be necessary to demonstrate that this administration is committed to supporting those who support the United States, and to protect American interests while taking into account the legitimate security concerns of others in the region. In particular, Washington must finally find a way to persuade Pakistan that the continued ability of the Taliban and the Haqqani network to operate in and from Pakistan is no longer acceptable to the international community. The Taliban must conclude that it cannot win through violence; ending the conflict will be immeasurably more difficult if Pakistan continues to afford safe haven to the insurgency.

This is a tall order, but there now exists the opportunity to turn the page in the Afghan chapter of the global conflict with violent Islamist extremism. In Afghanistan, the United States has an Islamic partner against terror, and friends and adversaries will be watching Washington’s decisions. Clarity of U.S. intent is absolutely vital. The lack of such clarity under President Obama confused U.S. partners and emboldened adversaries.

President Trump has stated his commitment to defeating Islamist terror. This cannot be accomplished by military means, which are necessary but insufficient, nor in short order. “We understand that we cannot kill an ideology,” a prominent Israeli leader once acknowledged to me. Defeating Islamist terror is fundamentally a political and diplomatic task, requiring the defeat of the twisted ideology that animates it. This is a generational challenge. This daunting but necessary fight could be fatally undermined if Afghanistan fails and provides the jihadists territory and a rallying cry. This fight will also be impossible to prosecute without the employment of the critical substantive and diplomatic expertise and global effort that a fully staffed and engaged State Department and career Foreign Service bring to the table.

The conflict with terror will take time, and ending the conflict in Afghanistan will not be easy. But the effort is necessary, and the United States has many international partners in this fight. Those who argue for leaving the Afghans to their own devices have the burden of defending the consequences. Afghanistan’s failure would be widely seen by friend and foe alike as America’s, undercutting the global struggle against terror and opening the way in Afghanistan to terrorists who mean Americans harm. Mattis, one of the finest leaders I have known, put it well: “This administration will not repeat the mistakes of the past. We cannot allow Afghanistan to once again become a launching point for attacks on our homeland or on our allies.” President Trump and his national-security team seem to be heading in the right direction. There will still be a difficult road ahead and much depends on the Afghans themselves. But American interests and security demand that the effort be made.

James B. Cunningham is a former U.S. ambassador to Afghanistan, Israel and the United Nations. He is currently a consultant and a nonresident senior fellow at the Atlantic Council.