Reports that local authorities brought stun grenades, unloaded missile launchers, and other military-style gear to break up protests at the... 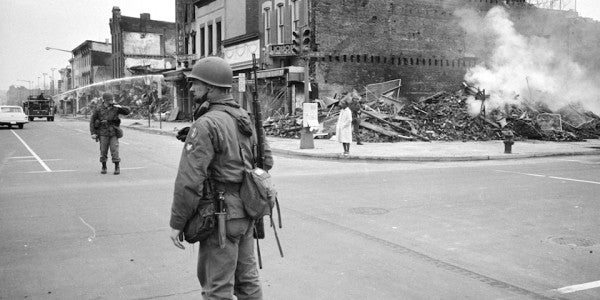 Photograph facing northeast showing a soldier standing guard on the corner of 7th & N Street NW in Washington D.C. with the ruins of buildings that were destroyed during the riots that followed the assassination of Martin Luther King, Jr.
SHARE

Reports that local authorities brought stun grenades, unloaded missile launchers, and other military-style gear to break up protests at the Standing Rock Indian Reservation in 2016 recently reignited the long-simmering controversy about the so-called “militarization” of police. However, the military has long had plans plans to tackle civil unrest, riots and even insurrections directly.

In the 1960s, the military planned to handle mobs with specialized tools such as helicopters and flamethrowers modified to spread tear gas. Thanks to Freedom of Information Act requests, Task & Purpose was able to get a look at some of the training manuals from that time.

“Every civil disorder or riot is brought about by previously existing factors,” a 1968 training circular on “Control of Civil Disturbances” warned. “Mob actions and ideas are like a contagious disease.”

The document made clear that it was the primary job of local and state authorities to deal with these problems and the underlying issues. However, citing America’s complex history, the authors reminded the reader that those officials often called upon the help of federal troops. The guide has specific information patrolling and standing guard outside critical facilities as well as dealing with much more exciting problems like rioters, looters, snipers, and arsonists.

Soldiers of California’s 40th Armored Division direct traffic away from an area of South Central Los Angeles burning during the Watts riot. Whole city blocks were gutted by arson and mob set fires that the fire department was powerless to control due to sniper attacks.Photo courtesy of the National Guard Education Foundation.

But beyond the benefits of extra manpower and training that troops brought with them, the Army had specifically stockpiled riot control agents and gear to respond to these crises.

Related: How The Military Conducts PSYOPS »

According to a 1961 training guide, every military police platoon — except those in combat divisions — could get one M3 “disperser,” based on the M2 flamethrower from World War II, when necessary. But the nearly 50-pound-backpack unit was full of the chemical 2-chlorobenzalmalononitrile, or CS, rather than napalm. While commonly called “tear gas,” the compound is actually a dry powder.

The M3 pumped out CS at ranges up to 40 feet, irritating the eyes and nose of anyone caught in the chemical cloud. A single 19-second burst would empty the tank.

The Army reportedly put the spray gear into action for the first time in 1959, according to an article by David Albert in Small Arms Review. American troops used the system to quell Panamanian protesters in the then U.S.-controlled Panama Canal Zone.

Soldiers in the United States and around the world also had access to larger spraying equipment that could fit on jeeps, two-and-a-half- and five-ton trucks, and even helicopters. Like the M3, the significantly larger M2 and M4 systems could hold CS, along with other agents.

These include CN, another “tear gas” agent most commonly known as the active chemical in the commercial product Mace, and DM. Unlike ordinary tear gas, DM, or Adamsite, inflames the eyes and other mucous membranes and then causes uncontrollable nausea and vomiting.

Each of the Army’s domestic Corps had two of the truck- or helicopter-mounted M4s and each one of the numbered continental Armies had two of the palletized M2s. On top of that, commanders in Alaska got two M4s and units in Europe and Asia had additional spray equipment. Troop also had access various grenades full of CN, CS and DM.

Of course, this equipment wouldn’t necessarily be sufficient to break riots all by itself. Beyond more recent concerns about long-term health consequences and similar countermeasures, the chemical sprays were only as effective to begin with as the weather allowed.

“After riot control agents have been released into the atmosphere, there is no way in which they can be guided to the target,” the 1968 manual noted. The handbook recommended waiting for overcast and humid days, as those “conditions tend to keep the agent cloud close to the ground and give the maximum effective downwind travel.”

Besides regular troops, National and State guards would have been eager to get this gear. As early as 1951, when fears of communists, anarchists, and other groups were spreading across the country, the National Guard Bureau even released a draft, standardized internal security organization for state militias. (Though largely unknown today, many states still have their own military forces, called state militias or state guards, that report directly to the governor separate from the National Guard.)

The organizational chart called for companies of 113 men, broken down into a headquarters and three platoons, but there was no description of their equipment. “Such arms, clothing and equipment as may be available to the internal security units by the Department of the Army will be furnished to the state through the National Guard Bureau,” the table explained.

During the Yippie protests in 1968, the Illinois National Guard did put their M3s in action, Albert noted, but there isn’t any clear evidence that the larger gear ever saw actual use.

The Army ultimately replaced the M3s with improved M33 backpacks in the 1970s. The military similarly consolidated the jobs of the M2s and M4s by buying new M5 spray units, which were simpler and lighter, for trucks and choppers.

Due to negative public perceptions about tear gas and the general age of the equipment, the Pentagon ultimately removed all of the remaining spray systems from active service by the end of the 1990s. Today, the Pentagon’s riot control weapons programs focus in large part on pepper spray, disorienting lights and sounds and even beams that cause extreme pain, but no lasting injuries.

Right or wrong, federal and state troops are still ready to respond to civil disturbances — such as widespread protests in Ferguson, Missouri, in 2015 or Baltimore, Maryland, in 2016 — but they no longer have the backpack-mounted spray tanks full of tear gas.