The US Army Is Deploying More Troops To Mosul

The U.S. Army is sending an “unspecified” number of combat troops from its 82nd Airborne Division to bring the pain... 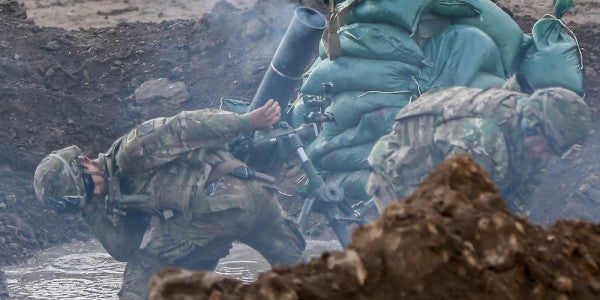 The U.S. Army is sending an “unspecified” number of combat troops from its 82nd Airborne Division to bring the pain to the Islamic State in the strategically important city of Mosul in northern Iraq, Military Times reported on Sunday.

Members of the 82nd’s 2nd Brigade Combat Team are headed to Mosul “on a non-enduring temporary mission to provide additional ‘advise and assist’ support” to Iraqi security forces currently locked in battle with ISIS militants, military officials in Baghdad told Military Times. The Pentagon did not immediately return requests for confirmation from Task & Purpose.

Iraqi security forces have been waging a gruesome campaign to liberate ISIS’ last major stronghold from Iraq from the terror group for more than six months, according to Reuters. More than 250,000 Iraqi civilians have been displaced from their homes in the city during that time.

News of the deployment comes at a crucial time for the military’s campaign against the terror group that’s spread throughout Iraq and Syria like cancer. In early March, members of the 75th Ranger Regiment crossed the border from Iraqi Kurdistan into Syria flying an American flag in what appeared to be the first major ground deployment of U.S. troops in the war-torn country to date.

While military officials wouldn’t confirm how many members of 2nd Brigade Combat Team are heading to Mosul, they did tell Military Times the deployment would not reunite the entire brigade. About 1,700 troops from 2/82 are currently overseas in the region of the total 4,000 that comprise the brigade, bringing the total number of “authorized” troops in Iraq to 5,262, officials confirmed. It is estimated that the total number of Americans in Iraq, however, is closer to 6,000, in addition to several hundred who have recently entered Syria.