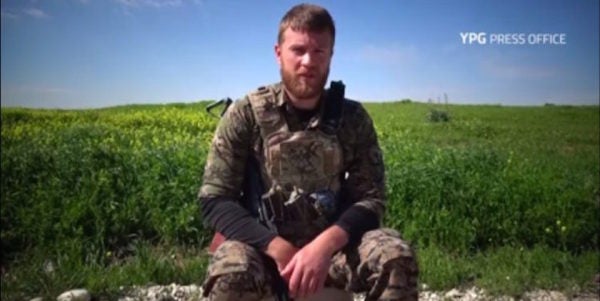 Warden died as a volunteer fighting alongside the Kurdish People’s Protection Units, known as the YPG, outside of Raqqa, Syria, the Kurdish group said on Twitter Tuesday.

It all proved to be devastating news to his father, Mark Warden of Depew.

“I'm not in a good way right now,” said Warden, who heard conflicting reports on whether his only son had died – before finally learning the bad news Tuesday.

Mark Warden recalled his son, a Cleveland Hill High School graduate, as a soldier's soldier, even after he left the U.S. Army for other military pursuits.

“He was very strong-willed and very strong-minded and very much against ISIS and these terrorist groups,” Warden, an Army veteran, said during an interview with The Buffalo News. “And he wanted to do whatever he could to get rid of them. He said not enough people are helping so he had to help.”

That's exactly what the younger Warden, who died less than two weeks after his 29th birthday, said in a Facebook video that the YPG posted on Tuesday.

“I joined the YPG to fight ISIS because of the terrorist attacks they were doing in Orlando, in San Bernardino, in Nice (France), in Paris,” he said.

Warden also said hello to his father in Depew and his mother, Dawn Hall of Geneva, in the video. He noted that he took a Kurdish nom de guerre, Rodi Deysie, in his fight against ISIS.

“During training, Rodi was described by comrades as 'a real soldier,' 'disciplined,' 'modest' and 'always the first to volunteer for duties,” the YPG said in the video.

Those comments came as no surprise to his father. He said his son wanted to become a soldier ever since he was 13, when the al-Qaeda terror group destroyed New York City's World Trade Center in attacks with hijacked airplanes.

“Ever since that, he was like: 'Dad, I'm going in the military, I'm fighting these people,” his father said.

“He's been battling since he was 18 years old, as soon as he was able to do,” Mark Warden added.

He fought even though it was not always easy for him.

His father said Nicholas had a medical condition that left him prone to dizzy spells when he was young. The Army noticed as soon as he tried to enlist.

“He had a hard time getting into the military and when they finally let him in, he took off from there,” Mark Warden said.

Nicholas Warden served in the Army for four years and nine months, doing two tours of duty in Afghanistan.

He remained extraordinarily brave all the while, recalled Steve Tylka, of Clarksville, Tenn., who befriended Warden when they served together in the Army's 101st Airborne Division.

“He was just one of those guys that seemed fearless all the time,” Tylka said. “There really wasn't anything that seemed to scare him.”

But there was another side of Warden, too – a warmth and wit well-known to all his friends.

“He was incredibly social,” Tylka recalled. “If you were in his circle of friends, it was close. He was always there. His sense of humor is probably what people know him for the most. He was always cutting up. He always had wisecracks and could turn anything into a joke.”

Warden did face one limit in life. Because of his medical condition, the Army wouldn't let him join the Special Forces or go airborne. He didn't let that stop him.

After he left the Army in late 2011 or early 2012, he stayed with Tylka briefly in Tennessee. Then Warden did something to continue the fight, and to prove he could do what the Army said he couldn't. He went off and joined the French Foreign Legion. He served for five years and did 49 paratrooper jumps.

“The doctors said he would outgrow (his medical condition), and he did,” his father said.

With the Foreign Legion, Nicholas Warden did tours of duty not only in France, but also in Chad, aiding that French-speaking African nation in its fight against the Boko Haram terror group.

While in France, he met a young woman who would become the mother of his daughter, Nerea, who is 18 months old.

Mark Warden, citing family privacy, declined to name the young woman who gave birth to his granddaughter. He also decided to keep private the photo he has of his son, cradling his young daughter.

Nicholas Warden left the French Foreign Legion last year and at first looked as if he would take a six-figure job with Triple Canopy, a contracting firm that works closely with the U.S. Army.

But with ISIS waging attacks in southern France, near where his daughter lived, he decided to return to the battlefield.

He signed on with the Kurdish group in February, and never provided much information about his duties there when he and his dad last spoke in May.

The YPG said Nicholas Warden was killed last week along with Robert Grodt, 28, of California. A British man fighting alongside the Kurds, Luke Rutter, was also killed.

About a dozen Americans have now been killed after volunteering to fight for the Kurdish group – something the State Department warns Americans that they shouldn't do.

“The U.S. government does not support this activity, and our ability to provide consular assistance to individuals who are injured or kidnapped, or to the families of individuals who die as a result of taking part in the conflict, is extremely limited,” the State Department said in a travel warning in March.

Mark Warden said Tuesday that U.S. officials told him his son was gravely injured in a mine blast July 5, and died two days later.

The three men were aiding the Kurdish group in its month-long battle to retake the northern Syrian city of Raqqa, which the ISIS terror group has claimed as its supposed capital.

Nicholas Warden went to Syria feeling that ISIS posed a threat to his daughter's way of life in France, his father said. The young fighter also figured he could join Triple Canopy, that defense contract, for that lucrative job once he had finished fighting ISIS.

“He thought he would do that after. Now there is no after anymore,” his father said.