Maj. Gen. Kurt Sonntag has watched and listened to the construction work outside his Fort Bragg office for as long... 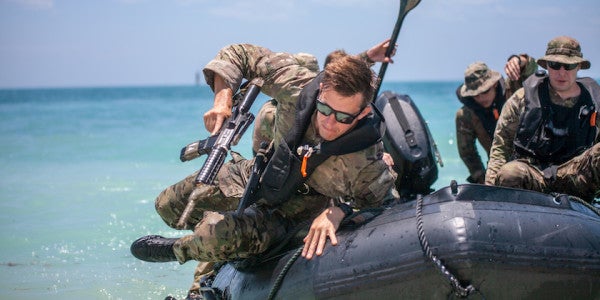 Maj. Gen. Kurt Sonntag has watched and listened to the construction work outside his Fort Bragg office for as long as he has been in command of the John F. Kennedy Special Warfare Center and School.

Glancing out the window of Bryant Hall, the sight of hard hats and fluorescent vests brings a smile to his face.

After years of efforts from past SWCS leaders, the schoolhouse that trains the nation’s Special Forces, Civil Affairs and Psychological Operations soldiers is undertaking a long-overdue transformation.

At a cost of nearly half a billion dollars, the Army is building new facilities and updating others across Fort Bragg and nearby Camp Mackall and at SWCS facilities in Key West, Florida, and Yuma, Arizona.

The end result, officials said, will be a footprint that more closely resembles a college campus than a military installation.

That’s no accident, Sonntag said. Army special operations is competing with colleges and universities for the nation’s best. And to compete, SWCS must upgrade its facilities as well as the way it teaches and trains soldiers across the special operations enterprise.

“We’ve got to invest more in our people,” he said. “We’ve got to catch up and stay ahead of technological advances.”

At any given time, SWCS has approximately 3,000 students, mostly at Fort Bragg, but also spread out in satellite facilities at other installations. That includes newly trained troops and special operations soldiers returning for more advanced skills.

The school long ago outgrew its facilities, now taking up shop in temporary buildings, trailers and even hotel rooms. But that is expected to change in the coming decade, as the revitalized campus takes shape.

At Fort Bragg, much of the ongoing construction of the new SWCS campus is focused on a block bordered by Ardennes Street and Gruber, Reilly and Zabitosky roads.

There, two multi-story buildings have risen from the remains of a block that was razed in recent years. A pedestrian bridge over Zabitosky Road connects the new development to nearby barracks buildings.

The first of those buildings, a special operations language and culture center, opened earlier this year.

Built at a cost of $64.7 million, the language and culture center will be dedicated as Clay Hall early next year. Hall was credited with helping to rebuild Europe after World War II.

The soon-to-be-named Clay Hall is home to the Special Warfare Education Group, special operations language and cultural classrooms and the Marquat Memorial Library.

Along with the existing Bryant Hall and neighboring Kennedy Hall on the other side of Ardennes Street, the four buildings will help form the core of a new campus that will surround open green space, tree-lined walkways and a planned statue garden. An additional pedestrian bridge will eventually link the campus to a nearby food court.

In all, the SWCS projects are valued at more than $456 million, with more than $101 million of construction already completed and another $112 million under construction.

The transformation of SWCS will bring facilities more in line with other institutions of higher education, officials said. But it also will upgrade tactical training facilities at Camp Mackall and the Gen. Yarborough Special Operations Forces Complex off Chicken Road.

But the centerpiece will be the campus on Ardennes.

Lt. Col. Sonya Dyer is command engineer for SWCS. She said officials aimed to consolidate the current command footprint while creating a space that is pedestrian friendly.

“It does have a campus feel to it,” she said.

Dyer said the new classroom spaces are better suited to a more technology-focused world and tailored to the specific needs of special operations forces — a far cry from the 1960s-era concrete buildings that now house much of the school. Other parts of the command are in modular trailers or temporary space strewn across Fort Bragg, including two hotels.

“The end state will be consolidation in modern, state-of-the-art facilities,” she said. “This brings the facilities up to what it should be.”

Joseph Rasmus, an engineer technician for SWCS, said the new space is flexible, allowing soldiers to meet in small study groups or as part of a larger lecture.

Rasmus said classroom space has long been tight on Fort Bragg. The new construction alleviates some of that crunch and overcomes challenges related to poor connectivity and overwhelmed electrical systems in current facilities.

“There’s no question there will be an improvement,” Dyer said. “It’s a major improvement.”

Sonntag said the updated SWCS facilities fulfill the vision laid out by a previous commander, then-Maj. Gen. Bennet Sacolick, who led the command from 2010 to 2012 and has since retired as a lieutenant general.

Between Sacolick and Sonntag, four other commanding generals have shepherded the development process, which will undoubtedly continue years beyond Sonntag’s time at the helm of SWCS.

“It took five years just to get started,” he said. “(Lt. Gen. Sacolick) got everything in motion. We’re just seeing the fruits of that vision.”

When Sonntag attended the Special Forces Qualification Course in 1991, he stepped foot in many of the same facilities those training Special Forces soldiers have used for nearly the entire history of SWCS.

But the need for special operations soldiers and the type of training required to produce and maintain the force has long outpaced those aging facilities, leading to a myriad of “temporary satellite” locations across Fort Bragg.

Key West is home to SWCS’s underwater operations school. Yuma houses the freefall parachute school. And other facilities are based in Kansas, Colorado, Washington, Virginia and Florida.

With the new campus, Sonntag said, the command can not only consolidate its facilities on Fort Bragg, but also live up to its moniker as the nation’s Special Operations Center of Excellence.

“It will become a centerpiece,” of Fort Bragg, he said.

The goal, the general added, is to create a campus that can adapt with new technologies related to augmented and virtual reality and the needs of special operations forces, rather than be outgrown by them.

“These will be there 100 years from now,” Sonntag said, looking at the new campus taking shape outside his window. “Probably longer.”

“This is going to have to last us,” he added.