The U.S. displayed its military might by flying long-range bombers and fighter jets off the coast of North Korea yesterday,... 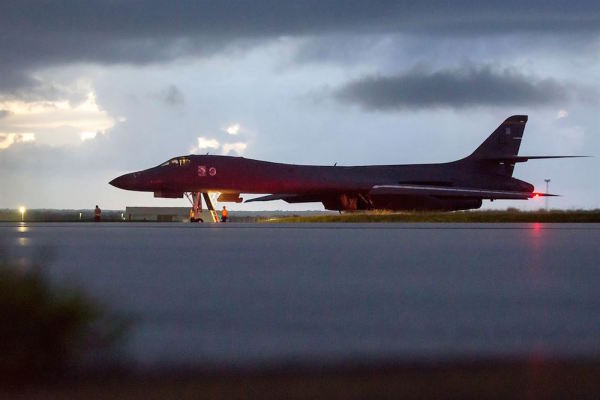 The U.S. displayed its military might by flying long-range bombers and fighter jets off the coast of North Korea yesterday, while the belligerent nation’s foreign minister called President Trump a “mentally deranged person” whose insults could spark rockets to rain down across the “entire U.S. mainland.”

The Pentagon said Air Force B-1B Lancer bombers and F-15C Eagles flew through international airspace over the waters east of North Korea — the farthest north of the demilitarized zone any U.S. fighter or bomber aircraft has flown this century.

“This mission is a demonstration of U.S. resolve and a clear message that the President has many military options to defeat any threat,” Pentagon spokeswoman Dana White said in a statement. “North Korea’s weapons program is a grave threat to the Asia-Pacific region and the entire international community. We are prepared to use the full range of military capabilities to defend the U.S. homeland and our allies.”

U.S. bombers and fighter jets joined Japanese and Korean aircraft earlier this month in a “show of force” after the North fired an intermediate range ballistic missile over Japan.

Korea expert Bruce Bennett of the RAND Corp. said the military’s flexing could have been a test to see if the North would respond to the bombers encroaching at their border.

“The test would be to see if North Korea would come and intercept the B-1 aircraft,” Bennett told the Herald. “They realize if they did that — with U.S. air superiority having sent fighters along with — they would not have done very well.”

Back in the U.S. at United Nations headquarters in New York, North Korean Foreign Minister Ri Yong Ho fired back at Trump’s name-calling with a barrage of insults.

Ri fired back at Trump’s speech earlier in the week that called Kim Jong Un “Rocket Man” and threatened to “totally destroy” North Korea if provoked.

The North Korean foreign minister called Trump a “mentally deranged person, full of megalomania and complacence, the person chastised even by American people as ‘Commander-In-Grief,’ ‘Lyin King,’ and ‘President Evil.’?”

Ri also said that Trump’s depiction of Kim as “Rocket Man” makes “our rocket’s visit to the entire U.S. mainland inevitable all the more.”

Bennett said Kim has long operated under a policy of deterrence by bluster — with scorched-earth threats to any sleight no matter how small. Forceful U.S. responses have tested Kim’s mettle.

Kim “doesn’t want fighter jets flying up his coastline and he’s hoping America will not do that anymore,” Bennett said. “He’s been successful in the past simply by threatening and not taking any physical action. Trump is proving that that is not going to work like it has in the past.”