The 591 weapons released over Afghanistan in May were the most in a month so far this year, according to... 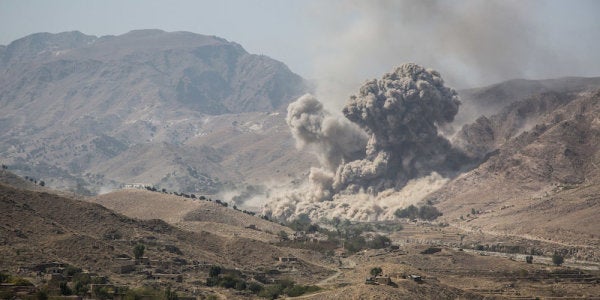 The 591 weapons released over Afghanistan in May were the most in a month so far this year, according to new statistics released by the Air Force.

Those 591 topped the previous high this year, which was 562 in April — a count that includes bombs, missiles, and ground attacks. The record for a month is the 653 weapons released in October 2017 — that month, August 2017, and April and May this year are the only months to exceed 500 weapons released.

Overall, the U.S, aircraft conducted 726 sorties as part of Operation Freedom's Sentinel in May, 73 of which included the release of at least one weapon.

President Donald Trump said last year that the United States would increase its troop presence in Afghanistan to combat the resurgent Taliban as well as the growing presence of a local offshoot of ISIS called Islamic State-Khorasan, or ISIS-K.

Since then, a squadron of A-10 Thunderbolt ground-attack aircraft have been stationed in Afghanistan, as have MQ-9 Reapers used for intelligence-gathering and reconnaissance. F-16 Falcon fighter jets and EC-130H Compass Call electronic-warfare aircraft, among others, are also in the country.

Trump also delegated more authority to the Pentagon and commanders on the ground.

“We have given them total authorization, and that's what they're doing,” Trump said in April 2017, after the GBU-43 Massive Ordnance Air Blast (MOAB) weapon was dropped on an ISIS-K target in northwest Afghanistan — the first battlefield use of that weapon.

Related: The Mother Of All Bombs Is Waiting Patiently For An Encore In Afghanistan »

In recent months, the US has stepped up its targeting of the Taliban's drug labs and other revenue-generating infrastructure, using advanced aircraft like the F-22 Raptor stealth fighter to bomb rudimentary buildings around Afghanistan.

The Taliban has deepened its involvement in the drug trade, and many of its labs are easily rebuilt.

The May airstrike data was released as Army Lt. Gen. Austin Scott Miller went before lawmakers as the nominee to be the commander of U.S. Forces Afghanistan. He would be the ninth U.S. general to take command since the invasion in late 2001 and the first appointed by Trump.

Miller acknowledged that the 17 years the U.S. has spent in Afghanistan “is a very long time” but said he “cannot guarantee you a timeline or an end date” for the deployment of the 16,000 US troops now in the country.

The Pentagon believes that the Taliban controls or is contesting control of about one-third of Afghanistan, while the Afghan government controls the rest.

“I've learned a lot in the last 17 years,” Miller, who currently oversees Joint Special Operations Command, told the Senate Armed Services Committee. “I've learned there are groups that want nothing more than to harm Americans.”

“I've learned these groups thrive in ungoverned spaces,” he added. “I've also learned that when we maintain pressure on them abroad, they struggle to organize and build the necessary means to attack us.”

When pressed by senators, Miller admitted the Pentagon needed to be considering pulling out of Afghanistan in the coming years but stressed that a “precipitous and disorderly withdrawal” would lead to “negative effects on U.S. national security.”

Miller, who deployed to Afghanistan as a lieutenant colonel in 2001, underscored the generational nature of the war by gesturing to his son, a second lieutenant in the Army, during the hearing.

“This young guy sitting behind me,” Miller said. “I never anticipated that his cohort would be in a position to deploy as I sat there in 2001 and looked at this.”