Editor’s Note: This article by Richard Sisk originally appeared on Military.com, the premier source of information for the military and veteran community. The U.S.... 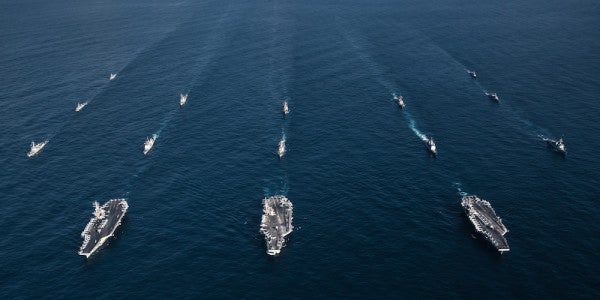 The U.S. military lacks the troops, ships and planes to counter a growing range of security threats and the great power challenges posed by Russia and China, according to the annual defense strength index from the Heritage Foundation.

“As currently postured, the U.S. military is only marginally able to meet the demands of defending America's vital national interests” despite the buildup and increased defense budgets under the Trump administration, said the Heritage 2019 Index of U.S. Military Strength.

The Army's active-duty strength of about 480,000 is over-deployed and over-committed; the Navy's 284 ships is far short of the projected need of 355: and the Air Force is flying too many aging aircraft that cost too much to maintain, assuming that it had enough maintainers to do the job, the Index said.

The fifth iteration of the Heritage Index essentially echoed previous ones in describing a military that is underfunded for the growing set of missions assigned to it, including the proposed creation of a sixth branch of the military, the U.S. Space Force.

“The U.S. does not have the right force to meet a two major regional contingency (two-MRC) requirement and is not ready to carry out its duties effectively,” the 2017 Index stated. “Consequently, as we have seen during the past few years, the U.S. risks seeing its interests increasingly challenged and the world order it has led since World War II undone.”

An encouraging sign in the latest report from Heritage, which is seen as being close to the Trump administration, is the improved readiness of the Army's brigade combat teams, but the Index also warned that those gains will diminish without increased funding in future defense budgets.

The Index characterized the Army's readiness as having improved from “weak” to “strong,” and Wood credited the upgrade to Defense Secretary Jim Mattis and his focus on readiness since taking office.

“The U.S. risks seeing its interests increasingly challenged and the world order it has led since World War II undone.”

The military can count upon being called into action in another future conflict, Wood said. “It always happens. So he [Mattis] has really been pushing the services to improve the readiness of the forces they have, to fix broken gear, to get munitions built back up in the stores, realistic training.”

In his opening remarks, Thomas Spoehr, director of the Center for National Defense at Heritage, said the 2018 Index noted “positive signs” in reforming the military under Mattis, but added that some areas “have not gotten better at all,” a reference to the Air Force's ongoing pilot shortage.

At a Heritage forum on the Index and a follow-up panel discussion, Sen. Joni Ernst, R-Iowa, said a side effect of the booming economy is the impact on recruitment.

Earlier this month, the Army, for the first time since 2005, reported falling short of its annual recruiting goal by about 6,500 soldiers despite setting aside $200 million for bonuses to enlist.

In noting the Army's shortfall, Ernst, a member of the Senate Armed Services Committee, said, “It is going to be increasingly difficult” to boost recruitments.

Too many of the nation's youth currently don't meet standards for recruitment, she said, and the military is faced with “an ever-diminishing population to pull from.”

One way to boost enlistments is to grant waivers to those who don't meet the standards, Ernst said. “I'm not sure where I stand on that,” but “we have to find a way that we can entice people to serve our country.”

The overview from the 2018 Index stated, “The military has struggled in its capacity and readiness for operations — brought about by harmful budget caps, underinvestment in research and development, and decades of sustained engagement in the Middle East.

“Although the FY2018 and FY2019 defense budgets reflect positive growth for defense, military strength remains far below where it needs to be,” it continued.

At the panel discussion, Todd Harrison, director of Defense Budget Analysis at the Center for Strategic and International Studies, gave a dim view on the prospects for ever-increasing defense budgets that would address some of the concerns raised in the Index.

The defense budget for this year was about $716 billion, and the projection is for a similar amount next year, he said.

Mattis and Joint Chiefs Chairman Gen. Joseph Dunford have argued for continuing growth in the defense budget of 2 to 3 percent per year above inflation, Harrison said, but his own expectation is that defense budgets will remain flat over the next five years.

“A flat budget means that we're going to have to downsize the force and defense modernization programs. That's the reality,” he said. “The services have got their targets to grow the force structure” and buy new equipment, “but I don't understand how you're going to pay for it in a flat budget.”