The U.S. and South Korea on Monday began a five-day joint air exercise on the Korean peninsula involving 230 aircraft... 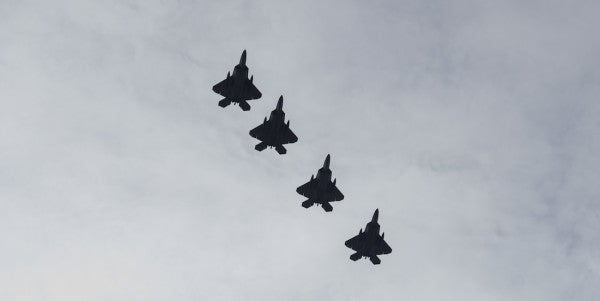 The U.S. and South Korea on Monday began a five-day joint air exercise on the Korean peninsula involving 230 aircraft and 12,000 American troops, the allies said in a joint statement.

A day before the Vigilant Ace 18 drills, North Korea called for “merciless revenge” and said the nation would consider the “highest-level hard-line countermeasure in history,” according to the state-run Korean Central News Agency. It referred to a similar statement in September, which Foreign Minister Ri Yong Ho said may refer to a ground-level test of a hydrogen bomb in the Pacific Ocean.

North Korea regularly cites military drills around the peninsula as justification for its nuclear and missile-testing program. Last week, the isolated regime launched a new type of intercontinental ballistic missile with improved technology that can deliver a nuclear warhead anywhere in the U.S, and claimed it had completed its nuclear force.

The U.S. and South Korea said the exercises are an annual event aimed at ensuring peace and security on the peninsula. Yonhap News reported it’s the first time that six F-22 stealth fighter planes flew to South Korea at once, and that the allies plan to stage simulated attacks on mock North Korean nuclear and missile targets.

White House national security adviser H.R. McMaster told Fox News on Sunday that North Korea was the greatest immediate threat to the U.S., saying that the potential for war “is increasing every day.”

Sen. Lindsey Graham, R-S.C., said it’s time to start moving the families of American military personnel out of South Korea. “It’s crazy to send thousands of children to South Korea, given the provocation of North Korea,” the member of the Senate Armed Services Committee said on CBS’s “Face the Nation.”

Meanwhile, a Russian lawmaker who recently visited Pyongyang as part of a delegation from Moscow said that North Korea is ready for talks with the U.S. as long as Russia participates as a third party, the TASS news agency reported on Friday.

Vitaly Pashin said that before last week’s ICBM launch, North Korea had refrained from military provocations for 75 days while awaiting reciprocal steps from the U.S., according to Tass. Instead of meeting North Korea halfway, it said, the U.S. “announced large-scale surprise military drills.”