US Destroys Radar Sites In Yemen After Attack On Navy Ship

A U.S. Navy destroyer launched a salvo of Tomahawk cruise missiles early Thursday at three coastal radar sites along the... 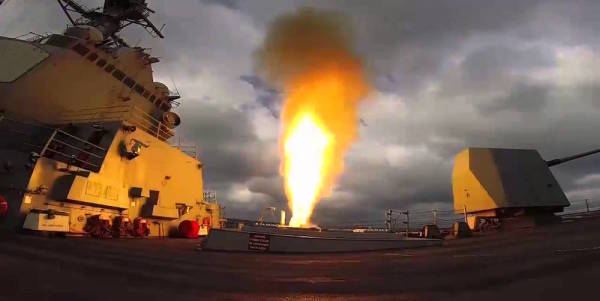 A U.S. Navy destroyer launched a salvo of Tomahawk cruise missiles early Thursday at three coastal radar sites along the western coast of Yemen, in what officials said was retaliation for the missiles launched this week toward a U.S. military ship in the Red Sea.

The Pentagon said the predawn offensive, launched from the U.S. destroyer Nitze, was aimed at installations in an area controlled by Houthi rebels. Initial assessments show the sites were destroyed, according to U.S. officials.

“These limited self-defense strikes were conducted to protect our personnel, our ships, and our freedom of navigation in this important maritime passageway,” Pentagon spokesman Peter Cook said in a statement late Wednesday.

“The United States will respond to any further threat to our ships and commercial traffic, as appropriate, and will continue to maintain our freedom of navigation in the Red Sea, the Bab al-Mandeb, and elsewhere around the world.”

The strikes, authorized by President Obama, pull the U.S. directly into a war in Yemen that's gone on for more than a year. They came just hours after the Pentagon said the U.S. guided-missile destroyer Mason was targeted by missiles fired from Hudaydah, a rebel-controlled area in western Yemen.

The ship was not hit and no one aboard was injured, but it was the third such missile launch against the Mason in the last four days.

The destroyer was operating in international waters near the Bab al-Mandeb strait, a narrow waterway between Yemen and the Horn of Africa, where millions of barrels of oil pass through daily on ships bound for Europe, Asia and the U.S.

U.S. officials said the Houthis had seized the coastal radar facilities at Ras Isa, Mukha and Khoka and used them to track and target vessels at sea with anti-ship missiles.

“These radars were active during previous attacks and attempted attacks on ships in the Red Sea,” said one U.S. official, who could not be identified discussing intelligence or ongoing operations. “The three radar sites were in remote areas, where there was little risk of civilian casualties or collateral damage.”

The Mason had been targeted by two missiles, believed to be variants of the Chinese-made Silkworm, on Sunday. It was targeted again with another missile on Wednesday. The ship took counter-measures, including firing interceptor missiles to defend itself, but did not fire on the rebels on land, U.S. officials said.

On Oct. 1, a missile fired from the coast of Yemen hit a high-speed HSV-2 Swift catamaran operated by the United Arab Emirates, severely damaging it. A YouTube video showed the vessel engulfed in flames.

The Houthis, a Shiite Muslim group backed by Iranian money and weapons, claimed the attack on the Swift, but not those on the Mason.

The Houthis have been locked in a war with a Saudi-led coalition since last spring when they forced Yemen’s U.S.-backed president into exile and quickly swept across the Arab world's poorest nation.

The Obama administration is providing intelligence, munitions and midair refueling to coalition aircraft, but has so far avoided direct involvement in the conflict, which has claimed the lives of thousands of civilians.

The White House issued a statement over the weekend that it was reviewing its participation in the war after reports that Saudi aircraft bombed a funeral, an attack that killed or wounded hundreds of people.