As the Taliban surges in its spring offensive, it is facing relentless strikes by hovering MQ-9 Reaper drones. This newly... 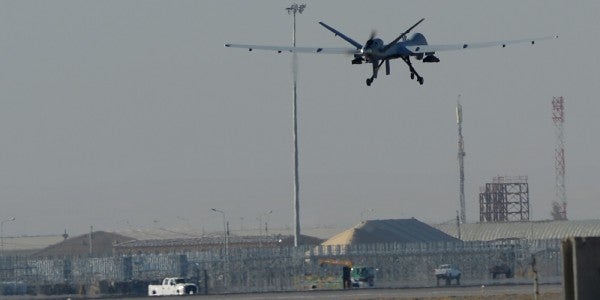 As the Taliban surges in its spring offensive, it is facing relentless strikes by hovering MQ-9 Reaper drones.

This newly released video shows the encircling drones killing about 28 Taliban fighters near Farah city in the western part of the country, where the Taliban is mounting their offensive.

The U.S. military command initially claimed that U.S. A-10s hammered the Taliban near Farah on May 15 but a spokesman later clarified that the A-10s had flown “show of presence” missions instead of conducting airstrikes.

“Fighting was subdued overnight,” O’Donnell said in an email on Wednesday. “It will likely pick up today. We conducted a number of additional drone strikes throughout the night and continue to enable the ANDSF [Afghan National Defense and Security Forces], who remain squarely in the lead. The 207th Corps commander is leading operations on the ground and the city remains in government control.”

Both the shooting and propaganda wars have escalated since the Taliban announced the start of their annual spring offensive in April. The U.S. military disputed the Taliban’s claim that it captured Farah despite videos posted on social media on May 15 that appeared to show Taliban fighters moving freely within the city.

In the waning days of the Obama administration, the U.S. military sharply curtailed air support for Afghan troops and police to wean them off U.S. airpower. But since President Donald Trump took office, U.S. airpower has gone on offense against the Taliban. In late 2017, U.S. fighters and bombers began attacking Taliban narcotics facilities to choke off the group’s revenue.

But so far, the combination of U.S. aircraft supporting Afghan security forces has not led to a substantial reversal of the Taliban’s gains.