After North Korea's latest missile test, Secretary of State Rex Tillerson called on all nations to clamp down on the... 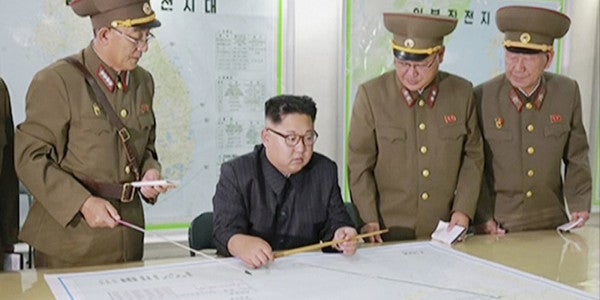 After North Korea's latest missile test, Secretary of State Rex Tillerson called on all nations to clamp down on the rogue regime and reasserted the US's “right to interdict maritime traffic” coming in and out of the country.

The threat riled Pyongyang, which has now threatened war if its ships are blocked.

“Should the United States and its followers try to enforce the naval blockade against our country, we will see it as an act of war and respond with merciless self-defensive counter-measures as we have warned repeatedly,” North Korean media said, also saying it would be a “big step” towards nuclear war.

But North Korea constantly refers to US actions as “acts” or “declarations” of war, and usually follows those claims up with threats of war.

After North Korea's latest nuclear test in September, the US sought the UN's consent to interdict maritime traffic coming in and out of North Korea, but it did not get accepted in the UN resolution that passed unanimously.

While North Korea's rhetoric tends to be vitriolic, naval blockades are typically considered an act of war, as they usually require violence to enforce.

Additionally, there is historical precedent for such practices causing war in the Pacific. In 1941, a US oil embargo on Japan served as a prelude to the devastating attack on Pearl Harbor that dragged the US into World War II.