The U.S. already has overwhelming force in the Middle East to deal with any threat from Iran, as it has built up air, ground and naval assets steadily since last May, as well as recent preparations for a possible conflict 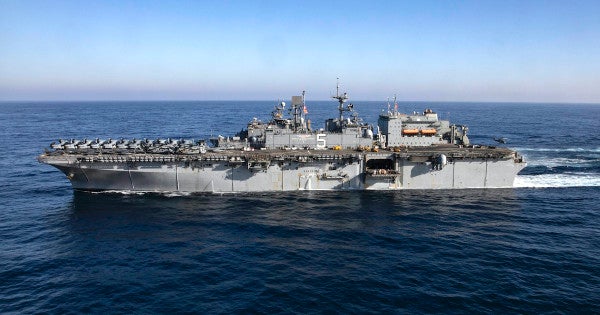 The U.S. already has overwhelming force in the Middle East to deal with any threat from Iran, as it has built up air, ground and naval assets steadily since last May, as well as recent preparations for a possible conflict.

By contrast, Iran has relied on “asymmetric” rather than conventional warfare by its own forces and proxies. But it possesses advanced missile and drone capabilities, according to the U.S. Defense Intelligence Agency.

After the U.S. executed a deadly strike on Iranian Quds Force commander Maj. Gen. Qasem Soleimani Jan. 3, and Iran retaliated Jan. 7 by launching missiles at two bases in Iraq housing U.S. troops, predictions are flying about what a possible conflict would look like.

Those forces were bolstered by the strike group of the carrier Abraham Lincoln, which was replaced last month by the carrier Harry S. Truman, and by the deployment of about 14,000 additional troops and the dispatch of Patriot anti-missile batteries to Saudi Arabia to guard its oil fields after drone strikes caused major damage last year.

As hostilities in the region spiked recently, culminating in the U.S. strike last week against Soleimani, the U.S. deployed about 3,500 paratroopers from the 1st Brigade Combat Team of the 82nd Airborne Division to Kuwait, put about 200 troops from the 173rd Airborne Brigade on notice to deploy and sent six B-52 Stratofortress bombers to the Indian Ocean base of Diego Garcia.

In addition, about 2,200 Marines with the 26th Marine Expeditionary Unit, embarked aboard the amphibious assault ship Bataan, are en route to the region, and elements the 75th Ranger Regiment are expected to deploy.

Last week, about 100 Marines from 2nd Battalion, 7th Marines, deployed from Kuwait to the U.S. Embassy in Baghdad as part of the Special Marine Air-Ground Task Force, Crisis Response-Central Command after a siege by protesters.

In a 117-page “Iran Military Power” report in November, the DIA said that Iran's military consists of parallel forces.

The conventional ground, naval, air and air defense forces currently number about 420,000, and the Islamic Revolutionary Guard Corps (IRGC), committed to the defense of the Islamic system of government at home and abroad, number about 190,000, the DIA said.

A particular concern is Iran's development and production of “a wide range of lethal and non-lethal UAV [Unmanned Aerial Vehicle] platforms. Iran has reverse engineered many of these systems based on captured Western UAVs,” the report states.

Some of Iran's newer UAV platforms, including the Shahed 129 and the Mohajer-6, “can be armed and are capable of conducting precision air-to-ground strikes with small guided munitions.”

The U.S. has charged that Iran used drones and possible cruise missiles to inflict heavy damage on Saudi oil fields in September.

In releasing the report in November, a senior DIA official, speaking on background, did not give specific numbers but said that Iran in recent years has built up the largest arsenal of short- and medium-range ballistic missiles in the Middle East — surpassing Israel's inventory — to deter the U.S. and regional adversaries and make up for shortfalls in its aging air forces.

In addition, Russia's sale last year of the SA-20c surface-to-air missile system “provided Iran with its first capability to defend itself against a modern air force,” the official said.

In his preface to the Iran report, Army Lt. Gen. Robert Ashley, the DIA director, said, “Iran continues to rely on its unconventional warfare elements and asymmetric capabilities” to counter the strengths of a superior adversary.

“Its substantial arsenal of ballistic missiles is designed to overwhelm U.S. forces and our partners in the region,” Ashley said, adding that Iran's small boats, large inventory of naval mines and anti-ship missiles could also be used “to severely disrupt maritime traffic in the Strait of Hormuz.”