US Marines Move Into Syria With Howitzers 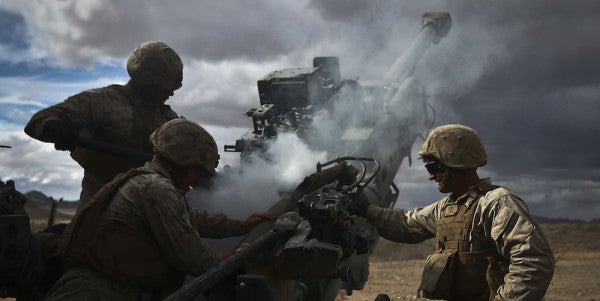 Marines attached to the 11th Marine Expeditionary Unit quietly moved into Syria weeks ago to establish an artillery base, defense officials confirmed to Military.com on Wednesday.

The move comes as American-backed forces intensify their assault on Raqqa, the Islamic State's capital city.

The Washington Post first reported Wednesday that Marines attached to the MEU — which is deployed around the Middle East, conducting training in countries including Oman and Djibouti — had departed their ships and moved into Syria.

A defense official would not speak to the size of the detachment deployed to Syria, but said it included elements of multiple artillery batteries, as well as support personnel, including infantry Marines. It's the first time American artillery support capability has been on the ground in Syria since the fight against the Islamic State began in 2014.

The Marines are equipped with M777 155mm howitzers, which can fire high-explosive rounds, effective at a range of more than 14 miles, or GPS-guided Excalibur rounds, which have an effective radius of up to 25 miles. They are there to provide capabilities for the commanders of the joint task force leading the ISIS fight and to support the push into Raqqa, the official said.

This is the second time in just over a year that a Marine artillery detachment has been deployed from a MEU in support of the ground fight against ISIS militants. In March 2016, more than 100 Marines departed the 26th MEU to establish Fire Base Bell, an artillery position in northern Iraq set up to provide support as ground troops prosecuted an assault on the ISIS stronghold of Mosul.

On March 19, 2016, one of the Marines, Staff Sgt. Louis Cardin, was killed in a rocket attack on the base that left four other Marines wounded, becoming the first American military casualty in Iraq since 2011. The Marine Corps element would eventually be replaced by an Army battery later in 2016.

The news of the Marine artillery element in Syria comes shortly after Army Stryker combat vehicles were spotted in Northeast Syria. The revelation prompted Air Force Col. John Dorrian, a spokesman for Combined Joint Task Force-Operation Inherent Resolve, the coalition prosecuting the ISIS fight, to confirm via Twitter that American troops had moved near Manbij, about 90 miles northwest of Raqqa.

On Monday, Pentagon officials confirmed that American-backed militia troops in Syria had taken control of a key route out of Raqqa, dealing an important setback to ISIS fighters.

A surge of U.S. forces in Syria and Iraq was one of the options recently presented by the Pentagon to President Donald Trump as a way to accelerate the campaign against ISIS. Trump and Defense Department leadership have yet to indicate what they plan to do.