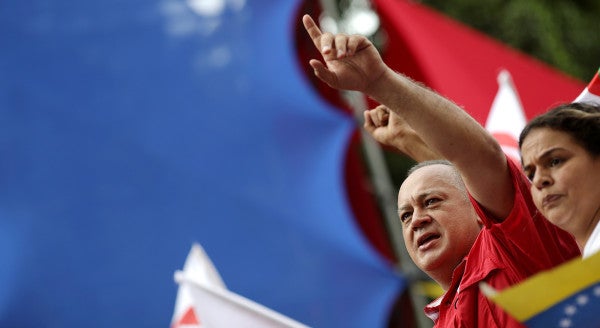 “We are few, a small country, we are very humble, and here it is likely that the U.S. Marines enter. It is likely that they enter,” Cabello told the Sao Paulo Forum, a gathering of leftist politicians and activists from across Latin America, without citing evidence.

“Their problem will be getting out of Venezuela.”

U.S.-Venezuela tensions have escalated this year since Juan Guaido, leader of the opposition-controlled National Assembly, invoked the constitution to assume an interim presidency in January, arguing socialist President Nicolas Maduro's 2018 re-election was illegitimate.

The United States and most Western democracies have recognized Guaido as the rightful leader. The Trump administration has said it prefers to continue to use sanctions and diplomacy to pressure Maduro to step down, but has not ruled out military action as an option.

Cabello presides over the Constituent Assembly, a legislative superbody loyal to Maduro which is not recognized by the opposition. He is widely viewed as the second most powerful official in Venezuela's government, after Maduro.

The U.S. military accused a Venezuelan fighter aircraft of “aggressively” shadowing a U.S. Navy plane in international airspace over the Caribbean Sea on July 19. Venezuela's government said the “reconnaissance and intelligence aircraft” had entered its airspace.

The Pentagon did not immediately respond to a request for comment on Cabello's remarks.

The National Assembly this week approved Venezuela's reentry into a regional defense treaty the country left in 2013. Opposition hardliners had pressured Guaido to re-join the treaty as a precursor to requesting foreignmilitary assistance to oust Maduro, but Guaido has warned it was no “magic solution.”

Maduro retains control of state functions and calls Guaido a U.S. puppet seeking to oust him in a coup.

On Saturday, Maduro called the decision to rejoin the treaty “illegal” and “treasonous.” Venezuela's Supreme Court on Friday ruled the reincorporation was “null” and that efforts to invoke the treaty would be considered a “hostile act.”