The once-mighty U.S. Merchant Marine fleet has nearly collapsed under the weight of high labor costs, zigzagging federal policies and... 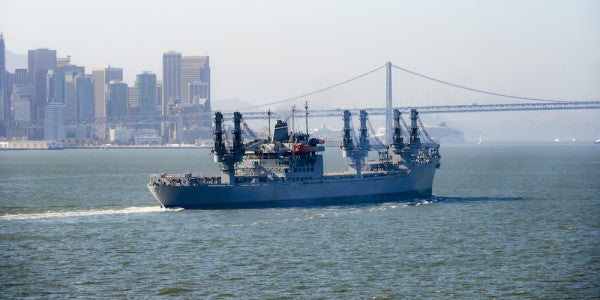 The once-mighty U.S. Merchant Marine fleet has nearly collapsed under the weight of high labor costs, zigzagging federal policies and intense competition from abroad, damaging America’s position as the only country in the world able to supply and sustain a long-distance war.

The U.S. Merchant Marine has declined from 1,288 international trading vessels in 1951 to 81 today.

The Merchant Marine is a fleet of U.S. ships that carries cargo during peacetime and becomes an auxiliary of the Defense Department during wartime to deliver troops and supplies to conflict zones. The Navy itself does not have enough ships to handle a large-scale supply mission on its own and has relied in almost every conflict on the Merchant Marine.

“I tell people we’re kind of on the ragged edge here of our ability to conduct a large-scale sea-lift operation to move our combat forces overseas. Even in an uncontested environment, we would be challenged,” Buzby said.

An Air Force general warned Congress last month that the Pentagon might have to turn to foreign vessels to mobilize equipment, just as it did in the 1991 Gulf War mobilization. But in that war, the crews of 13 of the 192 foreign-flagged vessels carrying cargo rebelled and forced their ships away from the war zone.

U.S. troops stationed in the Middle East and Afghanistan still receive much of their supplies via U.S. flag vessels. Despite the usage of heavy lift aircraft, large oceangoing vessels remain crucial to military mobility in the 21st century.

Vessels flying the flags of places like Liberia, Panama and the Marshall Islands usually have smaller multinational crews that stay at sea for longer periods, even as the value of the cargo aboard their ships — sometimes surpassing 20,000 containers — grows ever higher. U.S. flagships have more robust crews — a minimum of 22 — and all mariners take an oath of allegiance to the United States.

“They could sabotage equipment or have access to classified equipment and systems,” Buzby said. Or “just be slow or nonexistent about delivering it.”

Related: Mattis Is Pushing The Navy To A Brand New Fleet Strategy »

One member of Congress described the shortfall in merchant ships as a weak flank in the nation’s defense posture, and referred to one of the epic battles from World War II, saying it would have been a lost cause in today’s conditions.

“It’s debatable whether the Marines, if they were to land on the shores of Guadalcanal, would they be able to have supplies for the second month? The answer is, probably not,” said Rep. John Garamendi, a California Democrat and the ranking member of a House Transportation subcommittee that deals with maritime issues.

Crises over the U.S. Merchant Marine date as far back as the Civil War when the North rushed to charter vessels to help blockade Southern ports. Decades later, chaotic scenes unfolded at the port of Tampa in the run-up to the 1898 Spanish-American War as authorities tried feverishly to charter vessels to transport Col. Theodore Roosevelt and his 25,000 Rough Riders to Cuba. In the end, only 16,000 men would fit aboard the limited vessels.

Less than two decades later, the U.S. government found itself with little means to transport an expeditionary force to Europe in World War I, and “had to requisition, scavenge and steal to get the vessels,” said Salvatore Mercogliano, a maritime historian at Campbell University in North Carolina.

The ships also often face grave danger without the armaments to protect themselves or their cargo. By the end of World War II, 1,554 U.S. vessels lay at the bottom of the ocean, many of them sunk by German U-boats. Some 9,500 merchant died, a rate of casualty that rivaled that of U.S. Marines for the early part of the war. After the wartime buildup, the U.S. boasted the largest Navy and Merchant Marine fleet in the world.

Yet in the intervening years, U.S. shipping companies fell behind as global oceangoing trade grew a staggering twentyfold. U.S. flag vessels today carry only 2 percent of the $1.8 trillion in goods and material that transit U.S. ports each year.

U.S. shipping companies say they cannot meet the ever-lower costs of foreign shipping companies from nations that subsidize shipbuilding, allow skeleton crews aboard vessels and offer rock-bottom salaries. Some 50,000 oceangoing trading vessels ply the seas today. The United States is not even among the top 20 maritime nations of the world in terms of gross tonnage.

“They utilize Filipino, Indian, Chinese (crews from) low cost countries where the standard of living is far below that of the United States . They’ll go aboard a ship for six months straight,” said Thomas B. Crowley Jr., chairman and chief executive of a namesake shipping company that has headquarters in Jacksonville, Florida.

“Companies would love to be able to fly the American flag. They know it’s better protection for them,” Mercogliano said. He pointed to a piracy attack on the U.S.-flagged MV Maersk Alabama off the coast of Somalia in 2009, made famous in the 2013 movie “Captain Phillips.” U.S. Navy snipers killed three Somali pirates as they sought to escape aboard the cargo ship’s lifeboat with the ship’s American captain, who was uninjured.

U.S. flag vessels since that incident often sail with 50-caliber miniguns and security teams, especially when traveling in dangerous waters.

U.S. shippers cite the hypercompetitive global market as one factor in their decline. But they also say they’ve been hurt by fluctuating government policies, drastically reduced shipments of U.S. food aid abroad and the sharp drawdown of U.S. military forces abroad after the Soviet Union’s collapse in 1989.

Experts say the problem is not only about a dwindling number of ships. As the U.S. maritime industry shrinks, so does the number of mariners, who find fewer jobs and stay in them for fewer years, allowing mandatory periodic licensing to lapse once they leave. This makes emergency call-ups problematic.

“We’ll run out of people before we run out of ships,” Buzby said. He noted that a report to Congress submitted last year by a Maritime Administration working group found that the nation would face a shortfall of 1,800 mariners once a major war dragged toward six months.

The United States is the only nation in the world that can deploy large military forces anywhere, anytime, a conflict looms. The Pentagon has positioned supplies and armaments around the world. Once a deployment occurs, a subsequent “surge” from the Military Sealift Command, which has 15 vessels, would take more supplies. Behind them would sail any of the 46 government-owned ships of what is known as the Ready Reserve Force, many of them on five- or 10-day notice, ready to load and head to war.

The average ship in the Ready Reserve Force is 43 years old. While some of the ships are lightly used, sitting in harbor waiting for a future fight, 26 of the vessels are steam-powered, a largely obsolete propulsion technology that nonetheless requires a workforce of 491 steamship qualified engineers. The Pentagon has plans to keep a few specialized ships operating past age 60.

“They are old, they are declining and they are rusting out,” Garamendi said.

The vessels are strategically placed around the country, awaiting deployment. One of them, the Cape Washington, a roll-on, roll-off ship built in Poland in 1982, is now docked in Baltimore harbor. The ship could be packed with as many as 1,000 Humvees, hundreds of M1 tanks, or numerous Sikorsky CH-53 heavy-lift helicopters.

U.S. flag commercial vessels would be the final — but equally critical — component of sustaining foreign battle. Of the 81 commercial deep-water U.S. flag vessels in the Merchant Marine, 60 or so ships take part in the Maritime Security Program, which gives them an annual stipend of $5 million to be ready within days if called to service.

“They’ll start doing the bucket brigade of ammunition and follow-on supplies and everything else,” Buzby said. “It’s not just one push. It’s the sustainment. That’s what enables a combat force to keep going.”

Over the years, legislators have crafted a patchwork of incentives to keep the Merchant Marine afloat, if on life support. Among them:

— Cargo preference laws require 100 percent of Pentagon cargo be delivered on U.S. flag vessels as well as all cargo resulting from government loans or credit guarantees. Another quota exists for other U.S. government cargo, if shipping rates are deemed fair and reasonable. In a war, many of these U.S. flag ships would be diverted from civilian activity.

— Another regulation, known as the Jones Act, requires that goods moved by water wholly within the United States or among its territories must travel on U.S.-built, U.S.-owned vessels and staffed by U.S. crew. Puerto Ricans angry at delays in the arrival of relief supplies following Hurricane Maria last September blamed the Jones Act for exorbitant shipping costs. The White House eventually waived the Jones Act for 10 days.

But shippers have voiced frustration that legislators have tinkered with the rules, making their own long-term planning difficult. In 2012, Congress reduced the quota for U.S. flag vessels from 75 percent to 50 percent for U.S. food aid headed overseas. In late 2015 it lifted a four-decade ban on the export of U.S. energy production. The move allowed foreign vessels to load their holds with U.S. crude or liquefied natural gas (LNG) and export it.

“It would be helpful to have better long-term certainty of the programs we’re in,” Ebeling said, adding that the $5 million stipend per U.S. ship is set to expire in 2025.

“That’s only seven years away. When we’re going out to buy replacement ships, those are 30-year assets that we’re buying. And they may cost upwards, depending on vessel type, of $70, $80, $90, even $100 million per ship,” Ebeling said.

One move is afoot to stimulate shipyards by again requiring some energy exports to sail on U.S. flag vessels. Garamendi said he will introduce a bill in the House later this month that would require a growing percentage of LNG and other energy exports to move on U.S.-built ships, starting at only 1 percent and slowly rising to 30 percent.

“We would simultaneously rebuild the American fleet and the ability of our shipyards to produce blue water ships,” Garamendi said.