Thousands of U.S. service members who've been sent to operate along the Mexico border will receive a military award reserved for troops who "encounter no foreign armed opposition or imminent hostile action" 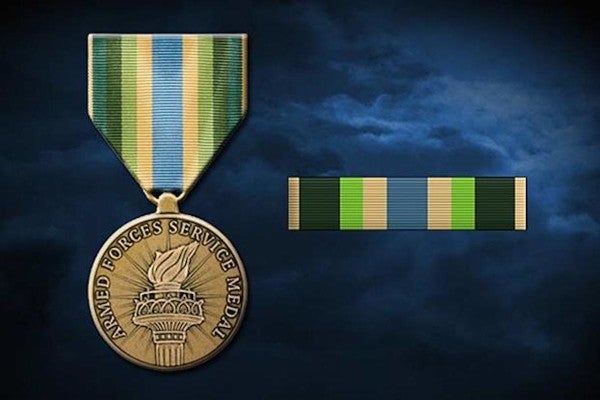 Thousands of U.S. service members who've been sent to operate along the Mexico border will receive a military award reserved for troops who “encounter no foreign armed opposition or imminent hostile action.”

The Pentagon has authorized troops who have deployed to the border to assist U.S. Customs and Border Protection (CBP) since last April to receive the Armed Forces Service Medal. Details about the decision were included in a Marine Corps administrative message in response to authorization from the Defense Department.

There is no end date for the award since the operation remains ongoing.

“The Under Secretary of Defense has authorized the Armed Forces Service Medal to service members who have provided support to CBP, starting from April 7, 2018 ,” said Army Lt. Col. Chris Mitchell, a Defense Department spokesman at the Pentagon.

Troops must have operated within 100 nautical miles — roughly 115 miles — from the Mexico border in Texas, New Mexico, Arizona or California, according to the Marine Corps administrative message. Those operating in San Antonio, where the mission headquarters is located, are also eligible, along with troops at sea who are within 24 nautical miles of the coast.

President Donald Trump first announced that active-duty, Reserve and National Guard forces would begin deploying to the border in April 2018. He has referred to the crisis there as an “invasion,” as Central American migrants fleeing violence in their countries have overwhelmed Customs and Border Protection agents.

The move hasn't come without controversy. Critics have slammed the decision to send thousands of active-duty troops to the border ahead of the 2018 elections as a political stunt that has pulled units away from their normal training and missions. The former commandant of the Marine Corps said in April that at least one training exercise was downsized as a result of the border deployments.

In February, Trump declared the situation on the U.S.-Mexico border a national emergency and, last month, the Supreme Court ruled the president could use $2.5 billion in Pentagon money to construct a wall there.

The Armed Forces Service Medal was created by President Bill Clinton in 1996 through an executive order. The award — which has a green, blue and yellow ribbon and a bronze medal featuring a torch similar to the one held by the Statue of Liberty — was previously given to troops who operated along the border under President George W. Bush. It has also been awarded to troops who have deployed to Bosnia, Haiti and West Africa on humanitarian or peacekeeping missions.

The back of the medal features the eagle found on the Defense Department seal, a wreath and an inscription that reads “In pursuit of democracy.”

The medal is approved only for operations “in which no other United States service medal is approved,” according to the Defense Department. It's awarded to service members who, as a unit, participate in a U.S. military operation “deemed to be a significant activity and who encounter no foreign armed opposition or imminent hostile action.”

It's considered the non-combat equivalent of the Armed Forces Expeditionary Medal and falls immediately before the Humanitarian Service Medal in order of precedence.This article originally appeared on Military.com