The US may trim over 1,000 troops from Afghanistan in belt-tightening, general says

Even before any peace push-related drawdowns, the U.S. military is expected to trim troop levels in Afghanistan as part of an efficiency drive by the new commander 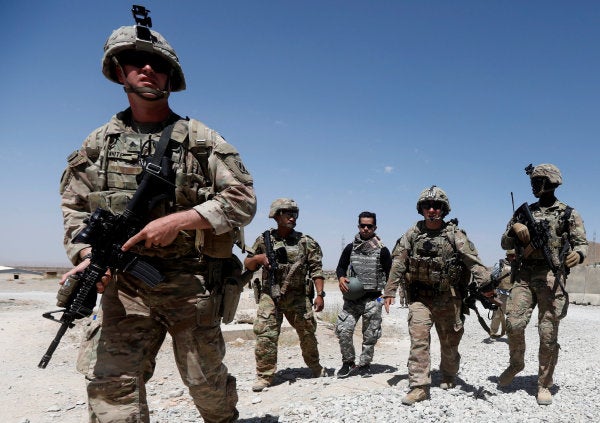 MUSCAT/KABUL (Reuters) – Even before any peace push-related drawdowns, the U.S. military is expected to trim troop levels in Afghanistan as part of an efficiency drive by the new commander, a U.S. general told Reuters on Friday, estimating the cuts may exceed 1,000 forces.

U.S. Army General Joseph Votel, the head of the U.S. military's Central Command, said the decision to reduce some of the roughly 14,000 American forces in Afghanistan was not linked to those peace efforts, however.

Instead, he said it was part of an effort by Army General Scott Miller, who took over the more than 17-year war effort in September, to make better use of U.S. resources.

“This is something that he started as he got into the position here and was looking at how we (can) be as efficient and as effective as we can be on the ground,” Votel said in an interview during a trip to Oman.

Miller's decision represents a reversal of sorts after years in which the U.S. military sought to slow or halt troop drawdowns under Trump's predecessor, Barack Obama, and previously lobbied for more troops under Trump.

It was unclear how far along any troop reductions might already be. The Pentagon says U.S. troop levels in Afghanistan are at around 14,000 but adds the number can fluctuate.

Other sources offered lower estimates. Diplomatic sources believe the efficiency push, which has been raising eyebrows in Kabul, was already driving down U.S. troop levels.

“We're watching this very closely,” said a senior Western diplomat, speaking on condition of anonymity. “It is clear General Miller's desire to streamline is already having an impact on numbers.”

Asked whether Miller would likely cut more than 1,000 troops from Afghanistan under the efficiency drive, Votel said: “He probably will.”

Votel added that some troops could be moved “over the horizon,” still remotely supporting the war effort from overseas. That, he said, would also reduce vulnerabilities in America's longest war.

“This is his decision as commander here – how he most effectively uses the resources that he has and trying to be as efficient as he can be,” Votel said, without offering a specific estimate of exactly how many troops Miller may withdraw.

Costs have increasingly been a focus of discussions between Kabul and Washington. Afghan President Ashraf Ghani recently sent a letter to Trump offering to reduce U.S. expenses in Afghanistan.

“How to do this more cost effectively is something that we have been working towards for a long time,” Roya Rahmani, Afghanistan's ambassador to Washington, told Reuters.

U.S. officials have held several rounds of talks with the Taliban in Qatar since last year in what is widely seen as the most serious bid for peace in the 17-year war. Taliban negotiators will meet their U.S. counterparts on Feb. 18 in Pakistan's capital, Islamabad.

U.S. officials have told Reuters the military is planning for what a withdrawal of about half of the 14,000 U.S. troops in Afghanistan would look like.

That has raised concerns about whether a smaller force would be able to support the Afghan militaryand whether other European armies that rely on American helicopters and other support would pull out.

It also raises questions about how big of a U.S. counter-terrorism force might be able to remain in the country.

Votel declined to discuss any internal deliberations, noting he had not received orders for a withdrawal.

Acting U.S. Defense Secretary Patrick Shanahan offered a similar reassurance this week, telling nervous NATO allies on Thursday that any potential U.S. troop withdrawal from Afghanistan will be done in a coordinated fashion.

Asked about Trump's concerns about endless wars, Votel said: “We don't want to fight endless wars either. We want to accomplish the mission here.”

“I think the strategy that the president has allowed to get put in place here, the South Asia strategy, focused on reconciliation, has been a good one,” he said.

Beyond U.S. troops in Afghanistan, the Pentagon relies on thousands of private contractors.

A recent report by the U.S. Special Inspector for Afghanistan Reconstruction noted there were an additional 861 Defense Department civilians and 10,698 contractors who were U.S. citizens.

Diplomats familiar with NATO operations told Reuters they believed the number of contractors was not expected to be reduced along with U.S. troop withdrawals, and could actually increase.

SEE ALSO: Taliban Claims Half Of US Troops Will Leave Afghanistan As Soon As May