Last year's hurricanes were particularly destructive for some of the military's most critical bases. In response, active, reserve and National Guard forces have looked at lessons learned to better prepare for this year's hurricane season 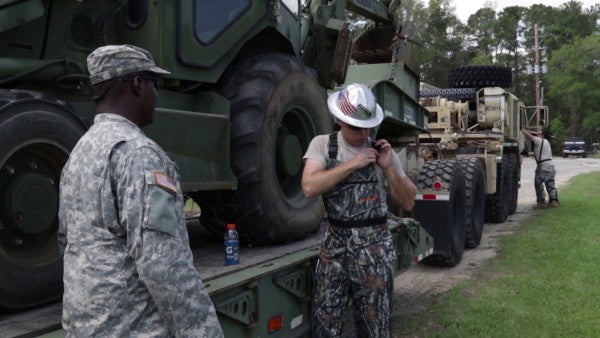 WASHINGTON — More than 150 members of the North Carolina National Guard gathered in Raleigh this month, with the damage from Hurricane Florence in 2018 still on their minds.

On a 40-foot map of the state, they began moving North Carolina's guard units around like chess pieces, to set the order of battle for the next major storm.

“We go through the timetable of a major hurricane hitting,” said North Carolina National Guard spokesman Army Lt. Col. Matt DeVivo. The units looked at preparedness five days out. Then two days out. Then landfall, to see “what will be mobilized, what we lack in capability” and what worked last time, he said.

Last year's hurricanes were particularly destructive for some of the military's most critical bases. In response, active, reserve and National Guard forces have looked at lessons learned to better prepare for this year's hurricane season, which starts June 1, even as they wait for federal funding to fix all the damage from last year.

As part of its review, the North Carolina National Guard also looked for capability gaps. This year there is an obvious one. Almost one-third of North Carolina's 12,000-strong National Guard will not be on hand to respond to a storm because a major component, the 30th Armored Brigade Combat Team, is on standby to deploy overseas. Instead, North Carolina has set agreements with other states to fill in guard personnel if needed, DeVivo said.

At Tyndall, many buildings remain as damaged as they were after last year's storm, and any new repairs ceased as of May 1 due to budget disagreements between the White House and Congress. Before funds ran out, the Air Force had prioritized addressing “mold removal, temporary roofs, replacing HVAC systems and other life, health, and safety issues” at critical facilities.

It also has tried to fortify those repairs so the buildings can weather this year's storm season and last through base reconstruction, which is expected to take between three to five years.

The Air Force has also looked closely at lessons learned.

Shortly after Hurricane Michael struck last October, then-Air Force Secretary Heather Wilson directed a review of “how the Air Force is postured to mitigate the risks of severe weather events,” said Air Force spokesman Robert Leese. The review was completed in early 2019 and resulted in approximately 130 recommendations, he said.

Tyndall houses a major component of homeland defense, the 601st Air Operations Center, which runs air and space responses for the North American Aerospace Defense Command (NORAD) in case of an attack.

Hurricane Michael knocked out most communications and created a cell phone dead zone around the base which prompted the 601st Air Operations Center to temporarily relocate to Langley Air Force Base in Virginia.

As a result, the Air Force is now looking at requiring more robust facility construction in storm-prone areas, improving its weather forecasting and tweaking command and control relationships, to ensure continuity of command in a future storm.

“Hurricane Florence has accelerated things so that we are better prepared to handle the next hurricane, when it comes,” said Nat Fahy, spokesman for Marine Corps Installations — East.

At Camp Lejeune, 134 buildings have been condemned because they were too badly damaged for it to make economic sense to repair them, Fahy said.

The most severely affected on base were the oldest buildings with shingled roofs. Over the winter and spring, the Marines have prioritized putting metal roofs on the salvageable buildings in advance of this year's storm season. And all future construction will take into consideration the force with which Hurricane Florence struck the area.

“We intend to make sure that all buildings in the future have metal roofs on them,” Fahy said. Current structures are being made “much more weather tight” with items such as window seals and vapor barriers.

SEE ALSO: 'It Was A Lost Cause' — Dramatic Photos Show Offutt Air Force Base Engulfed By Floodwaters

WATCH NEXT: What Hurricane Michael Did To Tyndall Air Force Base