The Defense Department has devised a new, tiered plan to test, isolate and screen military personnel for the coronavirus while the force awaits more widespread testing, which is likely still months away, defense officials said Wednesday. 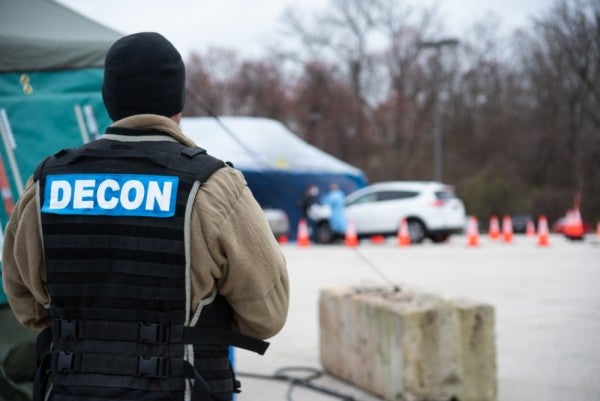 WASHINGTON — The Defense Department has devised a new, tiered plan to test, isolate and screen military personnel for the coronavirus while the force awaits more widespread testing, which is likely still months away, defense officials said Wednesday.

Active-duty personnel are now split into four tiers, with the first considered critical to the nation’s defense, such as fielding and operating nuclear weapons, said Gen. John Hyten, vice chairman of the Joint Chiefs. Tier two is “engaged fielded forces around the world,” while forward-deployed and redeploying forces comprise tier three. Tier four covers the rest of the 1.4 million active-duty service members.

The Defense Department currently has the testing capacity — about 50,000 a week — to handle all of tier one by the end of this month, Deputy Defense Secretary David Norquist said.

Under the new plan, the crew of a ship or submarine, for instance, would be screened with questionnaires and thermometers well ahead of their scheduled deployment. Those sailors would be quarantined for up to 21 days and then tested, which would help identify people who are infected but do not show any symptoms.

These procedures are aimed at keeping infections off ships and submarines, where close quarters do not allow for social distancing.

A handful of cases on board the USS Theodore Roosevelt last month grew to more than more than 600 as of April 21, causing the aircraft carrier to return to port in Guam to move most of the crew off the ship. The Navy relieved Capt. Brett Crozier, the ship’s commanding officer, of duty after a letter he wrote urging the Navy to move faster to halt the outbreak became public. Later, acting Navy Secretary Thomas Modly resigned after flying to Guam to address the Roosevelt’s crew and suggesting Crozier was either stupid or naïve to believe that his letter wouldn’t leak.

The new testing and screening regime is designed to help ensure that more units and military assets are ready to perform their missions, Hyten said.

“Testing by itself does not enable us at this time to improve our readiness and availability,” he said. “However, it is a powerful tool that’s helpful when complying with quarantine and other public health items that can improve our overall force availability.”

Last week, Gen. Mark Milley, chairman of the Joint Chiefs, told reporters that the Defense Department had the ability to conduct about 9,000 tests a day. He wants that number to grow to about 60,000 per day by the end of May.

The Defense Department is coordinating with the Department of Health and Human Services, FEMA, the White House and the private sector to produce enough tests to turn the supply issue into a logistics challenge.

“Because when it becomes a logistics problem, that’s something we’re really good at,” Hyten said.

As more questions about the coronavirus are answered, such as how long individuals remain contagious, the Defense Department will continue to refine its procedures, Norquist said.

“As we learn more about the virus, we will continue to evolve our approach,” he said.