The U.S. military currently has over 1.3 million men and women on active duty, and more than 450,000 stationed around the... 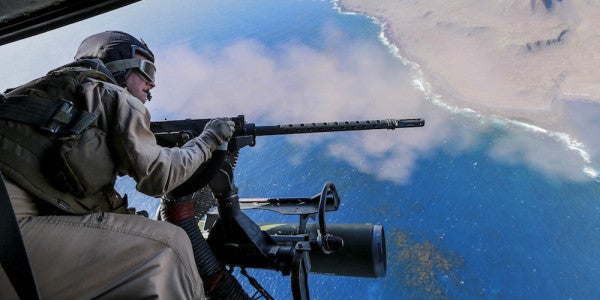 The U.S. military currently has over 1.3 million men and women on active duty, and more than 450,000 stationed around the globe.

Many of these stationed service members perform training exercises and other duties at rather safe bases. Then there are others who are deployed to conflict zones like Syria or Iraq or potential “hotspots” like Somalia.

We pulled together the numbers and units from around the military to show you where service members are engaged around the globe.

Here's a look at some of the most significant deployments for U.S. Army soldiers.

In Afghanistan, there are approximately 9,800 U.S. troops taking part in Resolute Support, which aims to train, advise and assist the Afghan security forces and institutions in their fight against the Taliban and other terrorist networks.

In Iraq, there are about 4,000–6,000 troops taking part in Operation Inherent Resolve, which aims to eliminate ISIS. Only 5,262 troops are authorized to be in Iraq, but the actual numbers have been larger for awhile as commanders leverage what they call temporary — or “non-enduring” — assignments like the one involving the 82nd Airborne in Mosul.

In Syria, there are 500 U.S. special forces and 250 Army Rangers also in support of Operation Inherent Resolve. The Pentagon is also mulling sending an additional 1,000 service members to the war-torn country.

In Kuwait, there are about 15,000 soldiers spread among Camp Arifjan, Ahmed Al Jaber Air Base, and Ali Al Salem Air Base. About 3,800 soldiers from the 1st Cavalry Division's 3rd Brigade Combat Team also deployed there late last year.

In Poland, there are about 3,500 soldiers from the 4th Infantry Division's 3rd Armored Brigade Combat Team as part of Atlantic Resolve, which seeks to halt Russian aggression. These soldiers will help train local forces and provide security, eventually fanning out to other countries like Estonia, Latvia, Lithuania, Poland, Romania, Bulgaria and Hungary to do the same.

In Somalia, there about 40 troops from the 101st Airborne division assisting the central government in training their forces and fighting the terrorist group al-Shabab.

Of the U.S. Navy's seven fleets, three are deployed in or near potential hotspots around the world.

The USS Carney,Ross, Porter and Donald Cook are part of the 6th Navy Fleet, which consists of 17 ships and 12,638 sailors.

The USS Bataan and George HW Bush are part of the 5th, which consists of 24 ships and 16,731 service members. The Bush is patrolling the Persian Gulf while the Bataan is south of Yemen.

The USS Reagan, Bonhomme Richard, Carl Vinson and Makin Island are part of the 7th, which consists of 53 ships and 37,935 sailors.

U.S. Marines are deployed around the world to help counter ISIS. Some are also deployed in efforts to push back against Russian aggression and to provide security.

In Syria, there are approximately 400 Marines taking part in Operation Inherent Resolve.

In Afghanistan, 300 Marines are taking part in Resolute Support.

In South Sudan, there are also approximately 40 Marines providing security to the U.S. Embassy.

In Norway, there are about 300 Marines as part of a bilateral agreement between Oslo and Washington to undergo winter training and reinforce Norway's border with Russia.

While the U.S. Air Force is deployed in bases worldwide, the service most recently sent two F-35s each to Bulgaria and Estonia.

Two F-35s were recently deployed to Bulgaria for training and “reassuring allies and partners of U.S. dedication to the enduring peace and stability in the region.” Another two F-35s recently deployed to Europe and will visit multiple NATO countries in support of European Reassurance Initiative.

Four hundred airmen from the 5th Bomb Wing recently deployed to the Middle East in support of Operation Inherent Resolve.

Twelve F-16 fighters are in South Korea to “help maintain a deterrent against threats to regional security and stability.” Multiple B-1, B-2 and B-52 bombers are also stationed there.

Here's a view across all four military branches.

Though we've shown you some of the most significant deployments around the world, it's worth noting that these graphics are not all-inclusive. We've kept off most traditional bases and training exercises, for example.

Here is a chart of the significant U.S. military deployments worldwide.

There are some other rather significant troops deployed to support in other service members in hotspots.

Thousands of service members, mostly airmen, are deployed in Qatar, where the U.S. Combined Air Operations Center at Al Udeid Air Base is located.

In Jordan, 1,500 soldiers, a squadron of F-16s, a Patriot missile battery, and M142 High Mobility Artillery Rocket Systems102 have been deployed due to the war in Syria.

About 7,000 U.S. military personnel are based in Bahrain, mostly sailors, as it is home to the 5th Navy Fleet. A large number of U.S. airmen also operate out of the Shaykh Isa Air Base, where F-16s, F/A-18s, and P-3 surveillance aircraft are stationed.

Elements of the U.S. 379th Air Expeditionary Wing are based in Eskan Village Air Base in Saudi Arabia, where the 5th Navy Fleet also patrols.