Since Russia's 2014 incursion in Ukraine, NATO leaders have been focused on securing the alliance's eastern flank. But defending that boundary and deterring threats to member countries there takes more than just deploying troops. It means moving them in and out, and, if necessary, reinforcing them, and that's something that's always on U.S. and European military commanders' minds 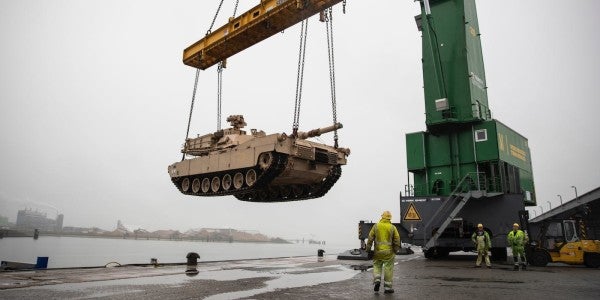 Since Russia's 2014 incursion in Ukraine, NATO leaders have been focused on securing the alliance's eastern flank.

But defending that boundary and deterring threats to member countries there takes more than just deploying troops. It means moving them in and out, and, if necessary, reinforcing them, and that's something that's always on U.S. and European military commanders' minds.

“I will tell you that when I go to sleep at night, it's probably the last thought I have, that we need to continue to improve upon, and we are, from a road, rail, and air perspective, in getting large quantities of hardware and software from west to east on continent,” U.S. Air Force Gen. Tod Wolters, head of U.S. European Command, said at a Defense Writers Group breakfast in Washington, DC, on Tuesday.

The U.S., which has drawn down its forces in Europe since the end of the Cold War, has put particular focus on both returning to Europe in force and on moving those forces around the continent.

This has included working at ports not used since the Cold War and practicing to move personnel, vehicles, and material overland throughout Central and Eastern Europe.

“In U.S. EUCOM, we have directors, which are flag officers that work for me, and they're called J codes, and our J4 is our logistician, and he's a Navy flag officer, and he's probably one of the busiest human beings on the European continent,” Wolters added. “He gets to sleep about one hour a day, and his whole life exists from a standpoint of finding ways to improve our ability to move large quantities at speed from west to east in road, rail, and air, across the European continent.”

'There will be some snags'

The renewed focus on moving U.S. and NATO forces around Europe has highlighted the obstacles posed by varying customs rules and regulations, insufficient infrastructure, and shortages of proper transport vehicles.

Those would be challenges for any peacetime mobilization and led NATO to conclude in a 2017 report that its ability to rapidly deploy around Europe had “atrophied since the end of the Cold War.”

To correct that deficiency, NATO has stood up two new commands. One, Joint Forces Command in Norfolk, Virginia, will oversee movements across the Atlantic. The other, Joint Support Enabling Command based in Ulm in southern Germany, is responsible for movement on the ground in Europe.

“We've also recognized the need in NATO to improve in this area,” Wolters said. “Through NATO command structure adaptation … we elected to standup an entire new command called Joint Support Enabling Command, JSEC, and it's run by … a NATO flag officer, and that commander's sole purpose in life is to nest with all the nations to find ways to improve our ability to move large resources at speed from west to east across the continent.”

That will be on display during Defender Europe 20, the U.S. Army's largest exercise in Europe in 25 years, which will involve 37,000 troops from 18 countries — including 20,000 U.S. troops deployed from the United States — and take place in 10 countries in Europe.

Defender Europe 20's actual drills won't take place until next year, but, Wolters said, “it's already started, because the benefit of a large exercise is all the planning that takes place beforehand.”

“The strategic message is we can demonstrate our flexibility and adaptability to lift and shift large forces to any place on planet Earth to effectively deter … and that's incredibly valuable,” Wolters said.

But, he added, getting the logistics right on the ground may be the biggest obstacle.

“We want to make sure that from a border-crossing perspective and from a capability perspective in those 10 nations in particular that we've got it right with respect to our ability to lift and shoot and move and communicate with an exercise at speed,” Wolters said.

“There will be some snags along the way. We will find things that we're not happy with. We will will after-action review those. We will find remedies in the future, and when we have another large-scale exercise we'll demonstrate an ability to get through those snags … and we'll just be that much quicker and that much faster in the future.”