U.S. European Command will "now be able to rotate units in perpetuity in multiple locations," including the Black Sea, which "dramatically improves our operational capability," Gen. Tod Wolters said 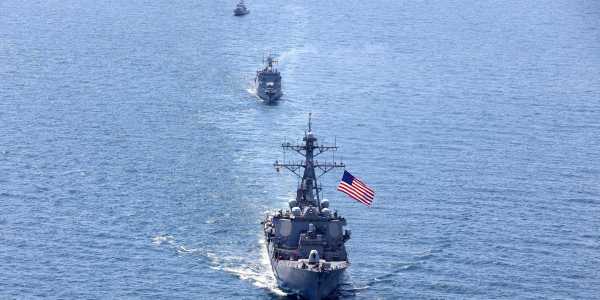 The long-awaited announcement about the redeployment of thousands of U.S. troops currently in Germany finally came at the end of July.

U.S. officials, including Defense Secretary Mark Esper and Gen. Tod Wolters, who heads U.S. European Command, outlined the moves and the strategic reasoning behind them. President Donald Trump immediately undercut their remarks, but their references to the Black Sea reflect how the region is a growing point of tension with Russia.

“We're moving forces out of Central Europe, Germany, where they had been since the Cold War,” Esper said. “We're following, in many ways, the boundary east [to] where our newest allies are, so into the Black Sea region” as well as Poland and the Baltics.

The shift means European Command will “now be able to rotate units in perpetuity in multiple locations,” including the Black Sea, which “dramatically improves our operational capability,” Wolters said.

'The Kremlin sees that'

Moscow, the most powerful Black Sea state, invaded neighboring Georgia in 2008. Tensions have remained high since Russia's 2014 seizure of Crimea from Ukraine.

“The Black Sea region is what the Kremlin uses launch its operations in Syria and Libya and the Eastern [Mediterranean],” Ben Hodges, who commanded U.S. Army Europe between 2015 and 2017, told Insider. “It's how they influence everything that goes on in the Balkans and the Caucuses as well as obviously Ukraine and Moldova.”

Hodges is one of many who criticized the redeployment of European Command forces, arguing it doesn't improve readiness and that the manner in which it's being done hurts NATO.

“Having said that, I always welcome any additional focus on the Black Sea region, because I think that … needs to be a much higher priority,” Hodges said, adding that Esper's suggestion that a Stryker brigade could be deployed to the region was “a very good idea.”

“Increasing [NATO] naval presence in the Black Sea region really is even more important,” as the Turkish, Romanian, Bulgarian, and Ukrainian navies are “still not a match for the Russian Black Sea Fleet,” Hodges said.

Hodges cautioned that the coming months — with an ongoing drought in Crimea, U.S. and Ukrainian elections, and Moscow's major Kavkaz-2020 military exercise in southwestern Russia — could see more Russian action.

Concerns about more aggressive moves by Moscow have risen on other occasions since 2014, and experts have said seizing more Ukrainian territory now amid that drought doesn't make much political or logistical sense for Moscow.

But the combination of factors creates an opening, Hodges said.

“Given the inconsistent response by this administration in the United States, and other than EU sanctions on Russia there hasn't been that much in the way of real, firm response in the region” to Russian actions, Hodges said. “I think the Kremlin sees that.”

The U.S. military has increased its presence in the area in recent years, and the 20th iteration of Sea Breeze, a Ukrainian-U.S. exercise with other Black Sea and NATO nations, was the latest example.

“Every visit to the Black Sea encompasses working together with our partners and growing our interoperability,” Cmdr. Craig Trent, commanding officer of Navy destroyer USS Porter, told Insider. “Together, we executed a complex, multi-warfare exercise all without stepping foot ashore for face-to-face planning due to COVID mitigations.”

This year it included more than 40 ships and aircraft from eight countries. The Porter was there on its third Black Sea patrol in five months.

The Porter worked with a U.S. P-8A Poseidon maritime patrol aircraft “to share a common tactical maritime picture” and “with Ukrainian tactical aircraft during the air-defense exercises,” Trent said.

The Black Sea “provides complex training opportunities, which enhance aircrew proficiency for littoral undersea warfare,” Plageman said. “Of equal importance was the cooperative interaction with allies and other partner nations, which improved our squadron's interoperability within the increasingly important Black Sea region.”

The Porter also worked with the U.S. Air Force on “air defense and surface-to-air integration of systems,” Trent said.

During Sea Breeze, U.S. Air Forces Europe led a one-day mission with Navy and Space Command assets “to train U.S. forces to integrate, operate, and communicate while executing all domain operations,” according to a release.

Sea Breeze concluded on July 26, but on August 2, the Navy and Air Force conducted a similar exercise in the area — with live weapons.