The US Military Is Struggling To Keep Up With All Its Responsibilities, Report Says

Years of complex operations and the ongoing demands of units in the field have left the armed forces struggling to... 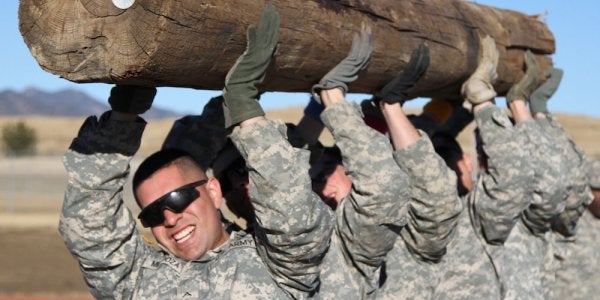 Years of complex operations and the ongoing demands of units in the field have left the armed forces struggling to maintain both operational capacity and high levels of readiness, according to a recent report from the Government Accountability Office.

“After more than a decade combatting violent extremists and conducting contingency operations in Afghanistan, Iraq, and most recently Syria, has prioritized the rebalancing of its forces in recent budget requests to build and sustain the capabilities necessary to prevail across a full range of potential contingencies,” the report states.

“However, DoD has acknowledged that unrelenting demands from geographic commanders for particular types of forces are disrupting manning, training, and equipping cycles,” it adds.

Each of the service branches has had some success in addressing readiness issues, but problems remain in some areas for each.

Aircrew members admire their MC-130E Combat Talon I in flight one last time during its final flight before retirement. The last five MC-130s in the Air Force belong to the 919th Special Operations Wing at Eglin Air Force Base, Fla.Photo via DoD

A high pace of operations has also hindered the Navy's maintenance efforts. The service bases its readiness recovery on deployment and maintenance schedules. “However, GAO reported that from 2011 through 2014, only 28 percent of scheduled maintenance was completed on time and just 11 percent for carriers.”

Like the Navy, the Air Force has seen continued operations with a shrinking pool of resources and little time for repair and recovery, citing Air Force reports that less than 50% of its forces are at acceptable readiness levels.

The service branch also says it is short of 1,500 pilots and 3,400 aircraft maintainers.

Air Force leaders are looking at several options to address these personnel issues, including heftier retention bonuses and stop-loss policies.

While the Army has seen readiness improvements in recent years, as GAO notes, it continues to have important deficiencies that put it at a disadvantage compared to other countries.

“For example, the Army reports that two-thirds of its initial critical formations — units needed at the outset of a major conflict — are at acceptable levels of readiness, but it cautions that it risks consuming readiness as fast as the service can build it given current demands,” the report says.

US troops from the 3rd Squadron, 2nd Cavalry Regiment call in their location in the back woods of the mock village they are taking over during Saber Junction 17, a field-training exercise at the Joint Multinational Readiness Center on May 15, 2017, at Hohenfels, Germany.Photo via DoD

The Army has also gotten withering criticism of its unit readiness from within the service itself.

According to Capt. Scott Metz, who until recently was a observer/controller/trainer at the Joint Multinational Readiness Center in Hohenfels, Germany, “many of our multinational partners are more tactically proficient at the company level and below than their American counterparts.”

“In fact,” Metz wrote in a paper published this spring, “several of them are significantly better trained and more prepared for war than we are.”

Metz recounted how unit commanders arriving at the JMRC would caution him about their unit's lack of preparation and the minimal training done at their home stations. In his role as the opposition-force commander during exercises, he could see how this manifested itself in potentially fatal mistakes in the field.

The opposition-force commander “knows from past experience that the Americans will probably stay on or near the roads,” Metz writes, adding:

“They will stop for long periods of time in the open with minimal dispersion. They will not effectively use their dismounted infantry and will likely leave them in the back of vehicles for too long, allowing them to be killed with the vehicle. They also will probably make little use of tactical formations and will not use terrain to their advantage.”

All units make mistakes during their time at the JMRC, according to Metz.

The shortcomings evident in units that visit the facility come rather from deficiencies in training they do at home.

“The problem is that they are making mistakes because they have not trained as a platoon or company,” Metz states.

A multitude of factors outside the control of commanders limits the time and resources they can devote to small-unit training.

This has resulted in the longstanding problem of a “deluge of requirements,” Metz writes, citing a 2015 report that “makes the case that the Army overtasks subordinates to such a level that it is impossible for Army units and Army leaders to do everything they are tasked to do.”

The problem is a deep-rooted one and will take some time to correct, requiring a cultural change starting at the highest levels of the Army's leadership, Metz writes.

Gen. Mark Milley, the Army's chief of staff, told the Senate this month that the Army, like the Air Force, is also suffering from a lack of personnel.

Though the US armed forces maintains definite advantages over peers and other forces in technology, training, and capabilities, years of operations and, according to many officials, reductions in funding have imperiled the US military's ability overcome opponents and fulfill its missions.

“In just a few years, if we don’t change our trajectory, we will lose our qualitative and quantitative competitive advantage,” Gen. Joseph Dunford, Chairman of the Joint Chiefs of Staff, told the House Armed Services Committee this month.

The military will need “sustained, sufficient and predictable funding,” he said, or it would lose its “ability to project power.”