Defense Secretary Mark Esper said Monday that U.S. strategic goals could include drawing down troops in Africa despite French pleas that American support is "critical" to countering the growing strength of terror groups in the region with links to the Islamic State and al Qaeda 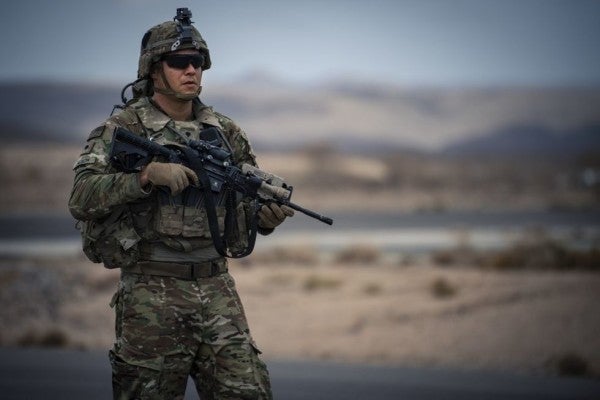 Defense Secretary Mark Esper said Monday that U.S. strategic goals could include drawing down troops in Africa despite French pleas that American support is “critical” to countering the growing strength of terror groups in the region with links to the Islamic State and al Qaeda.

“My aim is to adjust our footprint in many places,” including Africa, to free up forces for a “great power competition” against China and Russia, he said at a joint Pentagon news conference with French Defense Minister Florence Parly.

Esper said no final decisions have been made on withdrawing the estimated 6,000 U.S. troops in Africa, but said the priority must be either to bring the troops home or reposition them for a possible great power conflict.

He declined comment on whether the U.S. would abandon the drone base recently built in Niger at an estimated cost of more than $100 million as part of any potential drawdown.

Esper added that other European nations could fill the void if the U.S. withdraws support for the French.

“I think it's time for other European allies to assist as well in the region,” he said, “and that could offset whatever changes we make as we consider next steps in Africa.”

“We know perfectly well” the U.S. priorities, Parly said, but she suggested that Esper reconsider when it comes to Africa.

“I will mention again that U.S. support is critical to our operations, and its reduction would severely limit our effectiveness in our operations against terrorists” in the Sahel (sub-Sahara), where France intervened in 2013 and now has about 4,500 troops in Mali in a continuing counter-terror war.

“Our friends in the Sahel are in a situation where our assistance is critical, and I have expressed the hope that both the United States and France will keep on supporting them,” Parly said.

Since the French intervention in Mali, the U.S. has been aiding French troops with intelligence, aerial surveillance and in-flight refueling.

Parly's visit came a day after insurgents attacked a Malian army camp near the Mauritanian border, killing 20 government troops in the latest in a series of attacks in Mali, Burkina Faso and Niger, according to Agence France-Presse.

In late October, another attack by militants claiming allegiance to ISIS killed 53 Malian soldiers, according to government reports.

Earlier this month, the Army Chief of Staff in Niger was fired and three days of mourning were declared after a Jan. 9 raid on a remote base killed at least 89 Nigerian soldiers.

U.S. forces also have been increasingly engaged in East Africa against al-Shabaab rebels in Somalia. On Jan. 4, the rebels crossed into Kenya to attack the Manda air strip, killing a U.S. soldier and two American contractors.

U.S. Africa Command announced Monday that another airstrike was carried out against Al Shaba in Somalia, killing one suspected terrorist.

Last year, U.S. warplanes and drones conducted 55 airstrikes through October, the highest number since the U.S. involvement in Somalia, according to the Defense Department.

The increasing threat levels across the region have triggered a bipartisan push in Congress against a troop drawdown.

In a Jan. 10 statement, Rep. James Inhofe, R-Oklahoma, said that troop withdrawals from Africa “would be short-sighted, could cripple AFRICOM's ability to execute its mission and, as a result, would harm national security.”

Last week, in a letter to Esper, Rep. Adam Smith, D-Washington, chairman of the House Armed Services Committee, and Rep. Mac Thornberry, R-Texas, the ranking member, warned of the “adverse implications of reducing our force posture in Africa.”

Another bipartisan letter to Esper on Jan. 10 from Rep. Anthony Brown, D-Maryland, vice chairman of the committee, and 10 other House members said that U.S. troop withdrawals from Africa would go against the National Defense Strategy aimed at countering Russia and China that Esper has been advocating.

The letter noted the growing influence and investments of Russia and particularly China in Africa and said, “The execution of stability operations in Africa and meeting China and Russia in great power competition are not mutually exclusive.

“Rather than retreat from African affairs, it is in the interest of the United State to continue to share democratic values and military expertise with developing nations across the continent,” the letter continued.