The US Military Must Support Women For One Simple Reason: It Can’t Afford to Lose Them

I got married at 19, a decision made in haste as my boyfriend at that time was getting ready to... 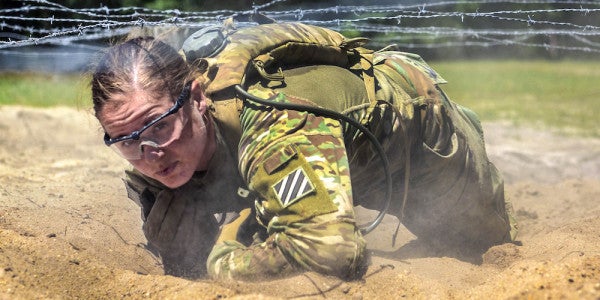 I got married at 19, a decision made in haste as my boyfriend at that time was getting ready to ship off to Fort Benning, Ga., and I was getting ready to leave for basic training in Fort Leonard Wood, Mo. It only took a few months of us being at our first duty station before I became pregnant. I know what you are thinking, because one of my NCOs, a woman I still deeply admire, made it clear to me that she didn't think women in the military should get pregnant during their first enlistment.

Only in the military is a woman who gets pregnant made to feel as if she has single-handedly compromised national security. While men in the military are celebrated for getting their women pregnant post-deployment and lauded (rightly so) for the sacrifices they make in being away from their families to protect our country, women continue to be disparaged for the same actions.

But the military needs women, and most women want families. The wars in Iraq and Afghanistan proved that women in the modern battlefield are a necessity. It led to the creation of FET and CST teams as an answer to a very real capability gap on the ground. And as the military enters a phase of growth in an environment where 71 percent of American youth are not eligible for military service, it will not meet end-strength goals without women. The military needs to recruit women and it needs to retain them, and to do this it will have to transform its culture to one that respects and supports a woman's decision to have a family and a military career.

My NCO came around to my pregnancy because she saw my commitment to my work. But I always felt that I had failed my unit by becoming pregnant and this sense of failure, which is reinforced by military culture, drove me to try and prove that my pregnancy would not be a burden to my unit. At one point when I was around seven months pregnant I showed up to work with a fever, and a thermometer in hand. I kept the thermometer at my desk, determined to work despite feeling sick, and just checked my temperature throughout the day in case it went above what my pregnancy book had described as a “safe” temperature for a pregnant woman.

Finally, when my temperature went close to 102 degrees, I had to admit defeat and, full of shame, tell my supervisor that I had to leave work and go to see a doctor. That incident ended with me being hospitalized for a few days. My drive to prove myself continued after my delivery. I spent a year pumping breast milk in the bathroom stalls of the division headquarters building I worked in, never complaining, and by the time my daughter was four years old, I had spent more than half her life away from her due to schools, training, deployments, and lack of child care slots at a new duty station. The constant separation, especially after getting back from my almost year-long deployment to Iraq, took a toll.

I struggled to resume my role as primary caretaker of my daughter (I was now divorced) and I struggled to reconnect with her. One month I was doing missions in Iraq the next I was battling with my daughter trying to get her ready to go to daycare. By the time I made it to PT I had spent a frustrating morning trying to get us out the door and I was ready to crawl back into bed with exhaustion. Then, less than 6 months after being back from deployment me and my new partner found out I was pregnant. I loved my job and I loved the Army but I could not keep stretching myself to the limit trying to prove that I, as a woman and mom, belonged in the military. So as a staff sergeant I took a Chapter 8.

Most women who are mothers in the military have struggled with this difficult choice, but it doesn't have to be that way. I know that the mission of the military is to fight wars, I saw plenty of combat in Baqubah during my deployment, and I know that a pregnant Soldier means a nondeployable Soldier. But by doing more to support families, and women and mothers who serve in particular, the military can meet its end strength mission, maintain readiness and be more combat effective.

First, the military needs to understand that pregnancy and becoming a mother is a natural part of a woman's life. Yes, it makes a woman nondeployable, but it is not an issue of any more particular concern than the myriad of reasons that make male soldiers nondeployable. Less than 1 percent of the female force in the Army is ever not available for duty due to pregnancy, and in fact, a study found that primarily male operational BCTs had a 14.5 nondeployable rate due to medical, admin and legal reasons, including sporting and motorcycle accidents, alcohol-related incidents or even trouble with the law. Yet these reasons are somehow seen as more acceptable than a pregnancy. Pregnancy is a temporary medical condition and can even be planned around deployment cycles. It also doesn't make a woman incapable of being productive, I worked right up to the day before my delivery. And despite the rumors, no woman I know of has ever decided to take on nine months of pregnancy, the pain of childbirth and the lifetime responsibility of raising a child just to avoid going on deployment. That biased view against pregnant female soldiers has to be eradicated.

Additionally, the military has to include women-specific reintegration training post-deployment. When I returned from deployment there was no acknowledgment that I, as a single mom, was the primary caretaker of my child, nor that I had just left my daughter for a year and would need to reestablish the mother-daughter bond. In a recent conversation with my best friend, who is still active duty, we talked about how the military's reintegration training is geared toward spouses of male Soldiers; they are told how to slowly allow him to readjust to being back in the home, let him slowly start making decisions and slowly ease him back into the household routine, yet there is no mention of how women redeploying have to jump right back into being primary caretakers of the home and of their children, nor any specific training on how women can reestablish the mother-child bond. The lack of gender-specific services is a glaring omission in reintegration training, recently identified in research by the Service Women's Action Network, and it is a gap that the military must address to make service more optimal for women.

The top causes for first unit attrition for women in the Army are disability, 14.8 percent, followed by parenthood or pregnancy at 14 percent (for men it's misconduct, 13.9 percent, and drugs or alcohol, at 12.2 percent, in case you are wondering). I recently chatted with a first-term female soldier in one of the operational career fields, which have the highest attrition rate for women. She is pregnant and plans to serve out her first enlistment and then get out. “I don't feel the Army is the best place to raise children,” she said. And that's not only a shame but also a concern for the military and for our national security. Military leaders and service members must provide real and tangible support to women who want to become mothers because losing them permanently from our formations not only compromises end strength but also makes us less combat effective. The same first term female soldier put it best: women soldiers, like male soldiers, also have “a right to a life, a family, and even a pregnancy… after all, family is part of what we serve our country for.”

Antonieta Rico served in the U.S. Army from 2001-2008. She worked in public affairs and embedded with infantry units during combat operations in Iraq. She is currently the Director of Communications and Policy at the Service Women's Action Network, a national advocacy organization for military women and women veterans.