The U.S. military command in South Korea said on Monday it would suspend training at a range after four South Korean civilians were killed in a crash with an armored vehicle late on Sunday 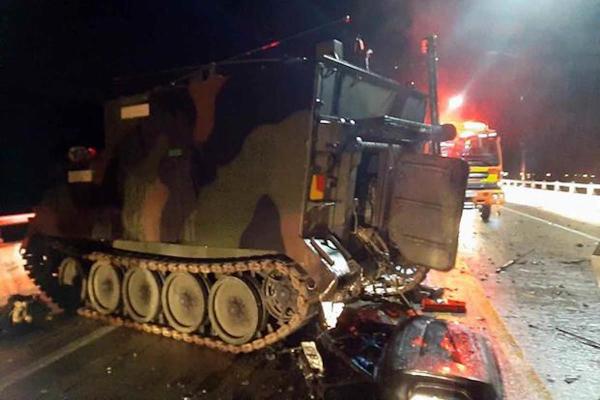 SEOUL (Reuters) – The U.S. military command in South Korea said on Monday it would suspend training at a range after four South Korean civilians were killed in a crash with an armored vehicle late on Sunday.

An SUV crashed with a military armored vehicle at about 9:30 p.m. on Sunday, on a public road about 5 km from a live-fire range used by the U.S. and South Korean militaries in Pocheon, between Seoul and the North Korean border, the fire department said in a statement.

All four people in the SUV died, while one U.S. soldier suffered light injuries and was sent to the hospital, the department said.

U.S. Forces Korea (USFK) said the vehicle belonged to the 2nd Infantry Division-ROK/U.S. Combined Division, which was the first division to include both South Korean and U.S. troops, lead by an American commander with a South Korean deputy.

“USFK offers its deepest condolences to the families and loved ones of the deceased following this tragic accident, they are in our thoughts and prayers,” the command said in a statement.

“Out of respect to those killed and their families Eighth Army is temporarily suspending training in the area.”

The two U.S. soldiers in the armored vehicle were “evaluated and returned to duty”, USFK said.

Photos and video from the site showed the SUV with its front badly mangled after apparently running into the rear of the tracked armored personnel carrier, which showed signs of lighter damage.

About 28,500 U.S. troops are stationed in South Korea, where the United States has maintained a military presence since the 1950-53 Korean War.

The allies are in the midst of a dispute over how much South Korea should pay toward maintaining the troops, and South Korea has been pushing for the United States to grant it the right to control all troops in the country in the event of a war.