Was That US Intercept Of A Mock Enemy Warhead In May ‘Realistic’? Not Exactly

After the nation’s homeland missile defense system successfully intercepted a mock enemy warhead high above the Pacific on May 30,... 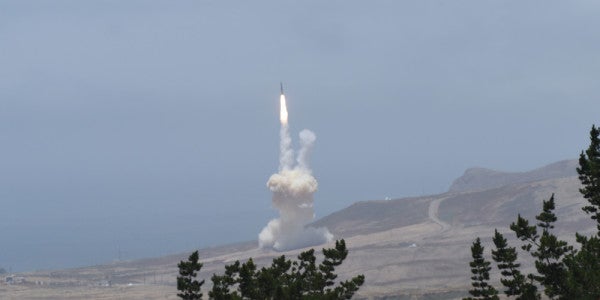 After the nation’s homeland missile defense system successfully intercepted a mock enemy warhead high above the Pacific on May 30, the director of the U.S. Missile Defense Agency said the test had been held under “very realistic” conditions, faithfully simulating an attack by North Korea.

“This is exactly the scenario we would expect to occur during an actual operational engagement,” Vice Adm. James D. Syring said at a news conference.

A week later, Syring told members of Congress: “The scenario that we conducted was actually an exact replica of the scenario that this country would face if North Korea were to fire a ballistic missile against the United States.”

In key aspects, however, the carefully scripted test posed much less of a challenge for U.S. missile defenses than would an actual attack, a Los Angeles Times/Tribune Washington Bureau investigation has found.

As a result, the successful intercept provides little if any confidence that the troubled Ground-based Midcourse Defense System, or GMD, would be able to thwart a sneak attack by North Korea, according to missile defense experts familiar with details of the test.

Their assessment carries added urgency in light of North Korea’s test this week of an intercontinental ballistic missile potentially capable of reaching Alaska. The missile flew farther than any previously tested by North Korea.

The May 30 test of U.S. missile defenses involved a target missile launched from the Marshall Islands in the western Pacific. The target was destroyed in space by an interceptor launched from Vandenberg Air Force Base in California.

In a departure from expected combat conditions, the target missile flew along a path where it could be tracked continuously by powerful U.S. radars that provide data to the GMD system, missile defense experts told The Times.

One of the radars, a giant, ship-borne system whose home port is Pearl Harbor, was moved to a particular spot in the Pacific specifically for the test, U.S. officials said.

The result was that the radars had excellent lines of sight to follow the target beginning shortly after launch — an advantage U.S. forces likely would not have during an actual attack.

The test also strayed from operational realism in its use of decoys, the experts said. It is assumed that missiles launched by North Korea or another adversary would deploy decoys in an attempt to fool U.S. defenses. To stand a chance of thwarting an attack, the GMD system would need to distinguish between decoys and the target.

The decoys used during the May 30 test, however, did not resemble the target missile’s mock warhead, making it easier for the system to disregard them, the experts said.

In addition, the test was conducted during daylight hours, enhancing the system’s ability to find and track the target, and the personnel who conducted the exercise knew the target missile would be launched during a fixed time frame of several hours — another advantage that could not be expected in a real attack.

Finally, the target traveled at lower speeds than a North Korea-launched missile would need to reach the U.S. mainland.

“To claim that this is a realistic test of the ability to handle sophisticated threats is ridiculous,” said David K. Barton, a physicist and radar engineer who reviewed details of the May 30 exercise at The Times’ request.

The U.S. Missile Defense Agency, in cooperation with the U.S. Air Force 30th Space Wing, the Joint Functional Component Command for Integrated Missile Defense and U.S. Northern Command, on May 30 successfully intercepted an intercontinental ballistic missile target during a test of the Ground-based Midcourse Defense (GMD) element of the nation's ballistic missile defense system. During the test, an ICBM-class target was launched from the Reagan Test Site on Kwajalein Atoll in the Republic of the Marshall Islands.Photo via DoD

Barton served on a National Academy of Sciences panel that studied the GMD system, and he has advised U.S. intelligence agencies.

Laura Grego, a physicist who examined the May 30 test as part of her research on U.S. missile defense capabilities for the Union of Concerned Scientists, said the advantageous conditions reduced the significance of the successful intercept.

“How does this test make you more confident that the system would perform against the North Korean threat?” Grego said. “It’s not a realistic attack scenario for Seattle, San Francisco, Los Angeles or any of the continental U.S.”

Barton and Grego both reviewed an unclassified Missile Defense Agency video that shows the exercise from launch to intercept and includes imagery from the interceptor’s onboard sensors.

Syring, who retired June 16 after nearly five years as the missile agency’s director, did not respond to a request for an interview.

An agency spokesman, Christopher Johnson, said in a statement that the May 30 exercise “was the most operationally realistic test we have conducted to date.” The distance flown by the mock enemy missile and the speed at which the GMD interceptor homed in on it were both greater than in previous tests, he said.

He cited a June 6 memo in which the Pentagon’s acting director of operational testing and evaluation, David W. Duma, said the test showed that GMD could defend against “a small number” of enemy missiles equipped with “simple” decoys.

That was more positive than the testing office’s previous assessments of GMD. In its most recent annual report, in January, the office rated the system’s reliability and the day-to-day readiness of its interceptors as “low.”

The GMD system is intended to defend the U.S. against a “limited” nuclear strike by a non-superpower adversary.

Thirty-six rocket interceptors — four at Vandenberg Air Force Base in Santa Barbara County and the rest at Ft. Greely, Alaska — form the backbone of the system. The Pentagon plans to increase the number to 44 by the end of this year by adding interceptors in Alaska.

The interceptors are 60-foot, three-stage rockets, each with a 5-foot-long “kill vehicle” at its tip. Once in space, the kill vehicles are supposed to separate from their rockets and slam into incoming warheads.

The GMD system was declared operational in 2004 and has cost taxpayers more than $40 billion to date. Its performance in flight tests has been erratic: Of the last 10 attempts to intercept and destroy a mock warhead, dating to 2002, only four have succeeded.

Based on that record, the missile agency projects that in an attack, four or five interceptors would have to be fired at any single enemy warhead. As a result, a volley of as few as nine enemy missiles could exhaust the current inventory of interceptors.

GMD’s problems have received heightened scrutiny as concern has mounted over North Korea’s nuclear program and its determined efforts to develop long-range ballistic missiles. It was against that backdrop that the May 30 test was held.

Seeking to emphasize the operational realism of the exercise, Syring told reporters on May 31 that the test included “countermeasures,” a technical term for decoys.

Johnson, the missile agency spokesman, declined to say whether the decoys used were designed to resemble what the U.S. would expect to confront during an attack.

As for the radars, the agency and its contractors positioned two powerful X-band radars so they could track closely the expected path of the target missile, which was launched from the Reagan Test Site on Kwajalein Atoll in the Marshall Islands.

One of the X-band radars was placed on Wake Island, north of Kwajalein, specifically for the test.

The second radar sits on an oceangoing vessel known as SBX, short for Sea-Based, X-Band Radar. For the test, SBX was positioned in the Pacific about 1,500 miles northeast of Wake Island, beneath the target missile’s anticipated path.

The X-band radars — so named because they operate in the X band of the radio spectrum — are more powerful than traditional radars. They not only can track a missile in flight, but also can provide a sharp picture of the target “cluster,” including any decoys.

With guidance from the Wake Island radar and SBX, personnel conducting the May 30 test would have been able to recognize the target and follow it almost from its launch until the point at which it was destroyed, according to experts familiar with the test.

“Having two X-band radars in the test so closely positioned along the target flight path is one way in which the test was scripted for success,” said Philip E. Coyle III, a former director of the Pentagon testing office.

Barton, the radar expert, said the placement of the X-bands was “far from an exact replica” of the radar coverage actually available for missile defense.

The U.S. has two X-band radars stationed on land in Japan, due east of North Korea. Because of Earth’s curvature, those radars would quickly lose sight of missiles launched from North Korea as they headed toward the Arctic region and the U.S. mainland beyond.

To extend its X-band coverage, the Missile Defense Agency spent $26 million building a special port for the SBX radar vessel in Alaska’s Aleutian Islands more than a decade ago. There, SBX would have been well-situated to pick up the tracking of missiles from North Korea.

But officials abandoned the plan, and SBX has been berthed at Pearl Harbor in recent years.

SBX could be moved to the Aleutians, and the missile agency says it plans to make the floating radar available for tests or other uses at sea for up to 230 days next year. But the journey to Alaskan waters could take weeks.

If North Korea attacked “without us having a priori knowledge,” said a government official who studies GMD, “then the SBX is going to be where the SBX is. The angle probably would not be optimum” for tracking enemy missiles.

At a June 7 hearing of a House Armed Services subcommittee, where Syring testified about the flight test, Rep. Susan A. Davis, D-Calif., touched on the scripted character of the exercise.

Without citing specifics, she said the test was conducted “somewhat under perfect conditions … under better conditions than perhaps we would face in a crisis.”

Davis said that “the American people … are looking to see whether or not the dollars that are being spent under these endeavors compare to what we need to do.”