The US Navy Is Getting A New Amphibious Assault Ship

The U.S. Navy will soon have another amphibious assault ship to add to its fleet. The future USS Portland (LPD 27)—a brand... 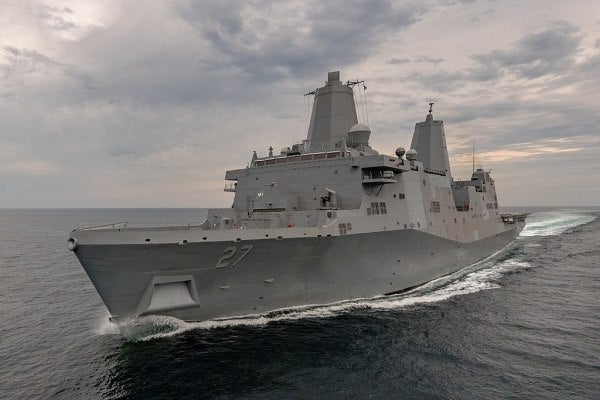 The U.S. Navy will soon have another amphibious assault ship to add to its fleet.

The future USS Portland (LPD 27)—a brand new San Antonio-class Amphibious Transport Dock ship—successfully completed Acceptance Trials on Aug. 18. PCU Portland is the 11th San Antonio-class to be presented to the Navy's Board of Inspection and Survey (INSURV) for acceptance.

“The USS Portland is a well-designed ship that is going to increase our Navy and Marine Corps warfighting capability for years to come,” said Vice Adm. Thomas Moore, commander of Naval Sea Systems Command.

“The material condition of the ship is fantastic, and the success she had during acceptance trials is a true testament to the men and women that built her.”

With a successful sea trial behind her, Portland’s crew will formally take ownership of LPD-27 next month according to the Navy.

“Completing this milestone is another significant step in Portland’s progression toward joining her ten sister ships – LPDs that have conducted operational missions, air strikes, and humanitarian relief missions along with their Marine Corps partners for 20 deployments worldwide.”

The INSURV Acceptance Trials went very well according to the Navy.

“The Navy and shipbuilder worked diligently to complete Portland and to fully demonstrate her capabilities in over 200 events,” Capt. Brian Lawrence, Supervisor of Shipbuilding, Gulf Coast, said.

“Their collective, exceptional efforts over the past five days are a culmination of years in planning, production, quality assurance, and testing by every member of the government/industry team.”

LPD-27 is scheduled to deliver to the Navy later this year and will be commissioned in the spring of 2018 in Portland, Oregon.

More from The National Interest :