The US Navy’s Most Advanced Warship Joins The Fleet Today

Greg Willard remembers the excitement in his former boss’s voice when he called to share the news. It was early... 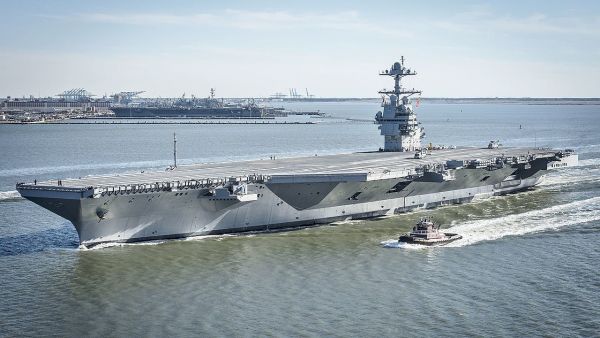 Greg Willard remembers the excitement in his former boss’s voice when he called to share the news.

It was early November 2006 and Navy Secretary Donald C. Winter had summoned Willard to the Pentagon to discuss naming the country’s next aircraft carrier, now known to the world as the Gerald R. Ford.

“The president was so excited, almost ebullient, even though his health was fading, to know that this ship was going to be named for him,” Willard, who worked as a staff assistant to Ford, said earlier this week.

The future USS Gerald R. Ford (CVN 78) displays “up and over” flags in observance of Independence Day. Ford is currently making preparations for commissioning July 22.

He recounted the conversation while surrounded by photos and mementos of the 38th president in the new carrier’s Tribute Room.

Nearly 11 years after that call, the Navy’s most expensive and technologically advanced warship is poised to join the fleet.

As many as 10,000 people are expected to witness as the Ford is commissioned Saturday at Pier 11 on Naval Station Norfolk. The Navy said it will provide water as well as mist and hand fans for onlookers because of an oppressive heat wave promising temperatures in the high 90s that day. Seating also will be set up in the hangar bay of the USS Dwight D. Eisenhower for people seeking shade before the 10 a.m. ceremony.

Sailors practiced for the day’s pomp and circumstance in the week leading up to the ceremony in the ship’s hangar bay. Row after row of white folding chairs was neatly aligned. A sailor stood at a podium and practiced introducing a litany of distinguished visitors – including President Donald J. Trump, Defense Secretary Jim Mattis, Virginia Gov. Terry McAuliffe and former Vice President Dick Cheney, who served as Ford’s chief of staff – while others buzzed around moving equipment, taking little heed as names were called out.

In one of the most iconic aspects of the tradition-worn ceremony, former first daughter and ship sponsor Susan Ford Bales will issue the long-awaited order to the crew to man the ship and bring it to life.

Her father served on the carrier USS Monterey in the Pacific during World War II and left the Navy in 1946 as a lieutenant commander. A napkin ring from the Monterey is among several items from the former president’s life that now adorn the captain’s inport cabin that Bales helped curate. Other items include an American flag, a desk chair and Ford’s 1992 Lone Sailor Award from the U.S. Navy Memorial.

Bales said her father, like many veterans, told few stories from his service. He did talk about “Halsey’s Typhoon,” which lashed the Monterey with swells up to 70 feet and nearly knocked him overboard, according to a Defense Department news release. Waves and winds tore fighter planes loose from their cables and a blaze erupted in the hangar bay as the aircraft collided, igniting fuel tanks. As the fire spread, Ford led a brigade that was credited with helping save lives.

As the USS Ford took shape over the last decade, Bales said she did what she thought her father, who died Dec. 26, 2006, would have done: be involved. She counts welding, pulling cable and other activities, including lunching with shipbuilders, among her tasks.

“It’s made a difference in my life, and I’ve had a great time doing it,” she said.

Trump’s visit to to the Ford also stands as a gray bookend to the administration’s “Made in America Week,” a campaign to highlight U.S.-manufactured products.

But Trump, who is expected to land by Marine helicopter on the Ford’s flight deck Saturday, will set foot on a first-in-its-class ship that has for years been hammered by Congress and the Government Accountability Office for cost overruns, reliability issues and construction delays.

The GAO again dinged the Ford last week in a report examining the Navy’s post-delivery shipbuilding processes, saying it could face “unknown quality” risks because it was delivered in late May with “a substantial amount of incomplete work.” The report said about four years and at least $780 million worth of work remains to address deficiencies, complete construction and finish tests and trials before the ship becomes combat-ready.

That work is incorporated into the Ford’s nearly $13 billion price tag, Capt. Thurraya Kent, a spokeswoman for the assistant secretary of the Navy for research, development and acquisition, said in a statement Thursday.

“Like all newly commissioned ships, CVN 78 will undergo Post-Shakedown Availability to correct any deficiencies deferred from its initial builder’s and acceptance trials, to work out maintenance discrepancies and to update equipment,” Kent said.

The Ford incorporates so many advanced technologies, including a new nuclear reactor plant, propulsion system, dual-band radar and systems to launch and land aircraft, that Navy leaders have said the new carrier class is virtually incomparable to the 10-ship Nimitz class that preceded it.

Jerry Hendrix, a retired Navy captain and director of the Defense Strategies and Assessments Program at the Center for a New American Security, said with all those technologies loaded into a first-of-its-class carrier, the amount of work left to do before the Ford can deploy is without precedent. Any additional problems that arise that threaten to push the Ford further into the future would only strain the rest of the fleet, Hendrix said.

“We’re almost a generation removed from the decision-makers, but now we’re dealing with the effects of those decisions,” he said.