A recent report from the Bulletin of Atomic Scientists details how the United States massively upgraded the lethality of its... 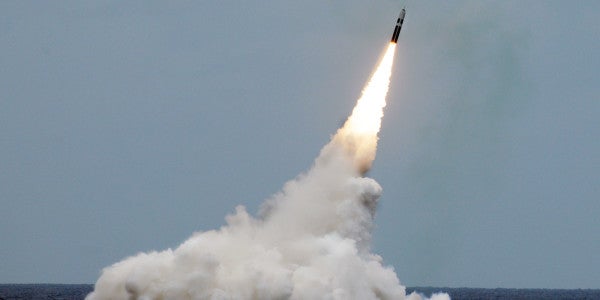 A recent report from the Bulletin of Atomic Scientists details how the United States massively upgraded the lethality of its submarine-based nuclear missiles — and U.S. adversaries like Russia may be spooked to the point of considering countermeasures.

Essentially, the United States' latest update to its Trident missiles aboard U.S. Navy submarines ensures that each and every single missile will explode at precisely the right moment to devastate any target.

Because of this new “super fuze,” or timing element, the United States' submarine-launched ballistic missile fleet has tripled in destructive potential, according to the report.

This is important because U.S. military planners previously only relied on submarine-launched missiles to strike soft targets like military bases. Now these missiles could be used to wipe out Russia's nukes buried deep underground.

“Because of improvements in the killing power of U.S. submarine-launched ballistic missiles, those submarines now patrol with more than three times the number of warheads needed to destroy the entire fleet of Russian land-based missiles in their silos,” wrote Hans M. Kristensen, Matthew McKinzie, and Theodore A. Postol, the authors of the report.

But the United States has even bigger nukes which sit in missile silos underground as ICBMs. Historically, these missiles would have been used for destroying Russia's ICBMs, but since submarines can handle that now, the US can focus its big nukes on obliterating underground hardened nuclear shelters — the kind Kremlin officials would hide out in during an attack.

From a U.S. perspective, submarine-launched nuclear missile capability has surged, but don't expect Russia to share the enthusiasm.

Unlike the United States, which can spot missile launches from space, Russia would have virtually no warning of an incoming missile besides its ground-based radars, which have limited range.

“Russian military and political leaders would have no 'situational awareness' to help them assess whether an early-warning radar indication of a surprise attack is real or the result of a technical error,” the scientists write.

Without eyes in space, Russia would have to answer a very difficult question very quickly if they detected an incoming missile.NASA photo

So Russian defense officials would have less than 15 minutes to decide if an incoming object was legitimate, where it was coming from, and how they should respond. This places a whole lot of responsibility on the shoulders of Russian military officials.