Two Air Force supersonic bombers flew low over the Korean Peninsula Sunday in a show of force after North Korea... 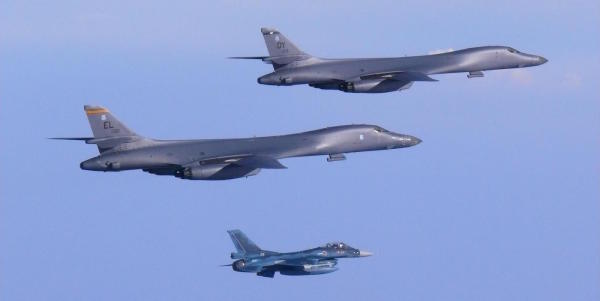 The exercise — part of a 10-hour mission with South Korean and Japanese fighter jets — was “in direct response to North Korea’s escalatory launch of intercontinental ballistic missiles,” a Pacific Air Forces statement said.

A suspected Hwasong-14 missile — the second ICBM North Korea has tested successfully so far this month — was fired late Friday from Mupyong-ni in the country’s far northwest and splashed down into the Sea of Japan about 620 miles east of the launch site, a Pentagon statement said.

The Guam-based B-1B Lancers first flew into Japanese airspace and were joined by two Japan Air Self-Defense Force F-2 fighter jets, the statement said. The bombers then flew over the Korean Peninsula and were met by four South Korean F-15s. After a low pass over Osan Air Base, the pair returned to Andersen Air Force Base, Guam.

The aircrews took part in “intercept and formation” training throughout the mission, the statement said.

A similar drill took place after North Korea launched its first ICBM on July 4, though that one involved the Lancers firing inert weapons at a range in South Korea.

The Air Force said the missions show solidarity with its allies South Korea and Japan, where the U.S. has a combined force of about 80,000 servicemembers.

“North Korea remains the most urgent threat to regional stability,” Gen. Terrence O’Shaughnessy, Pacific Air Forces commander, said in the statement. “Diplomacy remains the lead; however, we have a responsibility to our allies and our nation to showcase our unwavering commitment while planning for the worst-case scenario.”