US Service Member Killed By Roadside Bomb In Afghanistan, Another Wounded

An American service member was killed by a roadside bomb Tuesday in southern Afghanistan in what military officials said was... 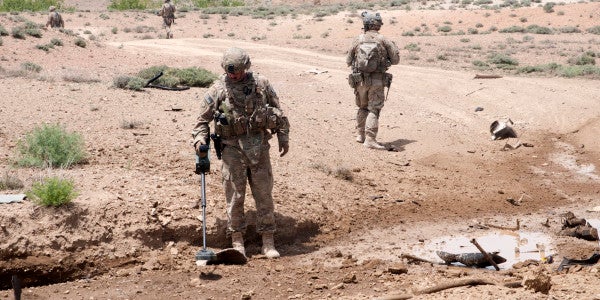 An American service member was killed by a roadside bomb Tuesday in southern Afghanistan in what military officials said was the first casualty of stepped-up U.S. operations in embattled Helmand province.

Six Afghan soldiers and an American were also wounded when their vehicle struck the roadside bomb while on patrol near the provincial capital of Lashkar Gah. The injured American was in stable condition, the U.S. military said.

The second U.S. combat death in Afghanistan this year came after the Pentagon announced Monday that 100 U.S. service members had been deployed to Lashkar Gah to help Afghan forces repel a Taliban advance on the strategic city.

Brig. Gen. Charles Cleveland, U.S. military spokesman in Kabul, said neither the soldier who was killed, nor the American soldier who was wounded, were part of the detachment that was moved into the city over the weekend to advise and assist Afghan forces.

The Pentagon did not release the name of the U.S. service member killed because of its long-standing policy to first notify family members.

Helmand, site of some of the fiercest battles involving U.S.-led coalition forces during the 15-year war, is the hub of Afghanistan’s poppy crop, a major source of Taliban revenue.

The insurgent group has launched a months-long offensive aimed at capturing Lashkar Gah and is believed to control more than half the province. Afghan military officials say some 4,000 Taliban militants are fighting in Helmand.

For the last three weeks, Afghan Special Forces soldiers, backed by dozens of airstrikes launched by U.S. helicopter gunships, have managed to keep the Taliban out of Lashkar Gah. U.S. and Afghan officials say the city of about 300,000 is no longer in danger of falling to the insurgents.

“While the Taliban has had some temporary, local success, the [Afghan forces are] moving back on the offense and beginning to clear some of the contested areas,” Cleveland said.

“As for Lashkar Gah, we believe that situation is calm within the city. For Helmand overall, we think the situation has been stabilizing over the last seven to 10 days.”

Provincial governor Hayatullah Hayat said Tuesday that Afghan forces had launched operations in four parts of Helmand over the last 24 hours, killing or wounding scores of insurgents. Afghan commandos have been leading the battles, in some cases backed by strikes from Afghan aircraft.

Following the Afghan counteroffensive, and with a near-full moon potentially exposing their movements at night, the Taliban have slowed their operations, Hayat said, though he added the militants were likely to regroup.

“I think they’ll relaunch assaults after a week or so, once the moonlight is gone,” Hayat said.

The NATO coalition has about 700 troops based in Helmand, largely comprised of U.S. soldiers and led by a U.S. one-star general.

The 9,800 U.S. troops remaining in Afghanistan are assigned to train and advise Afghan forces, meaning they only occasionally participate in direct combat anymore.

Yet nearly all the U.S. personnel in Helmand are members of elite Special Forces units that sometimes deploy into battle alongside their Afghan counterparts.

“The U.S. forces have been participating in some special ground operations with the Afghan commando forces,” said one Afghan official in Helmand who requested anonymity because he was not authorized to speak on the issue. In January, Army Special Forces Staff Sgt. Matthew Q. McClintock was killed in a battle alongside Afghan commandos in Helmand’s Marjah district.

11:17 a.m.: This article was updated with additional details.

10:07 a.m.: This article was rewritten with additional details and background.