US Soldier Accused In Stolen Humvee Case In South Korea

A U.S. soldier and six South Korean civilians have been accused of being part of a ring that stole three... 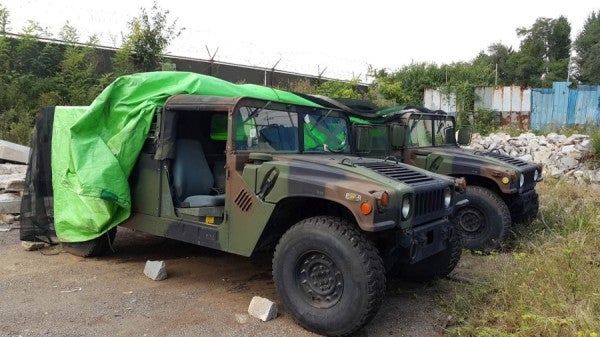 A U.S. soldier and six South Korean civilians have been accused of being part of a ring that stole three Humvees from a U.S. base in South Korea and tried to sell them, police said Thursday.

The soldier, identified only as a 47-year-old Korean-American man, allegedly conspired with the others to arrange for three Humvees to be stolen from the base in June and September of last year, police said.

The thefts were carried out by camouflaging the vehicles to appear as unused items, said Kim Dong Hwan, chief detective of the Seoul Metropolitan Police Agency’s international crime investigation unit.

“The soldier insists that he was not trying to steal the vehicles with the rest of the guys,” Kim told Stars and Stripes. “The Koreans kept denying what they did at first. But they’ve been saying lately that they attempted to sell the Humvees.”

Kim said it was the first time police have uncovered a ring trafficking in stolen Humvees in South Korea.

The suspects — who also included a civilian contractor working on the base, three junk dealers, a film-prop maker and an intermediary — have been booked without detention.

They’re under suspicion of receiving stolen goods, larceny or trespassing on military facilities but have not yet been charged.

Kim declined to identify the suspects or give the name of the base, saying police were turning the case over to prosecutors on Thursday.

U.S. Forces Korea said it “takes all allegations of misconduct or criminal activity very seriously” but declined to comment on the Humvee case specifically, saying it’s still under investigation. USFK’s public affairs office referred queries to the Army Criminal Investigation Command, which did not immediately respond to a request for comment.

One of the Humvees was sold to the film-prop maker for nearly $10,000, but the police retrieved the vehicle from him later, Kim said. Police caught the remaining suspects as they tried to sell the other two Humvees to Sri Lanka, Cambodia or Mongolia.

The vehicles were found on one of the junk dealer’s lots, he added.

U.S. bases in South Korea are tightly controlled with guards at access gates and entrance permitted only to people with authorization.

Police believe the U.S. soldier and the Korean civilian employee told colleagues that the Humvees were unused items being sent to the Defense Logistics Agency but then shipped the vehicles to the South Korean suspects instead.

Police said they worked with investigators from the U.S. Department of Homeland Security and the Defense Department.

The U.S. has some 28,500 servicemembers based in South Korea, which remains technically at war with the North after the 1950-53 conflict between the two countries ended in an armistice instead of a peace treaty.