Charles Robert Jenkins deserted the U.S. Army on a freezing night in January 1965. He pounded 10 beers to quiet... 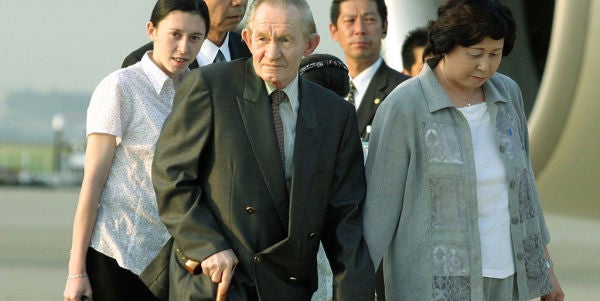 Charles Robert Jenkins deserted the U.S. Army on a freezing night in January 1965. He pounded 10 beers to quiet his nerves, and abandoned his patrol unit along the border dividing South and North Korea — a 160-mile-long, 2.5-mile-wide strip of mine-ridden no man’s land.

He unloaded his M-16 rifle to show the enemy he meant no harm; he raised his knees high to avoid triggering tripwires. Several hours later, he crossed into North Korea.

He didn’t leave for nearly 40 years.

Now, Jenkins — 77 but looking much older, with a deep-lined face and distant expression — lives a quiet life on Sado, a small, pastoral island in the Sea of Japan. He speaks in the thick Southern accent of his North Carolina childhood, and the stories he tells, 13 years after the end of his North Korean adventure, recall decades of solitude, deprivation and torture.

“In North Korea, I lived a dog’s life,” he said in a rare interview, as he drove his boxy Subaru through Sado Island’s rice paddies and sleepy villages. “Ain’t nobody live good in North Korea. Nothing to eat. No running water. No electricity. In the wintertime you freeze — in my bedroom, the walls were covered in ice.”

Jenkins works now as a greeter in Mano Park, a placid tourist attraction on the Japanese island, selling senbei, a type of rice cracker. Tourists see him and squeal with delight — “Jenkins-san!” — as he passively poses for photos.

But North Korea somehow feels as close as ever. The television news carries a constant drumbeat of stories: Pyongyang’s increasingly advanced missile tests, and nuclear threats; the death of Otto Warmbier, a 22 year-old American college student, after 17 months in North Korean custody; the assassination of ruler Kim Jong Un’s half brother in a Malaysian airport.

They all carry echoes of the one incontrovertible lesson he learned as a guest of the North Korean government for 40 years. “I don’t put nothing past North Korea,” Jenkins says. “North Korea could to do anything. North Korea don’t care.”

Six American soldiers defected to North Korea after the Korean War. Most were unhappy in the Army; most had troubled pasts.

In 1965, Jenkins was a U.S. Army sergeant posted to South Korea. But he was unhappy with his assignment and worried it could get worse. He feared his unit’s nighttime patrols along the border were too provocative and would get them killed; he feared he’d be sent to die in Vietnam. He got depressed, began drinking heavily and made a decision that he’d regret for the rest of his life: to go AWOL.

If he abandoned his troops and sneaked off in South Korea, he’d be found immediately. But defecting to the North, he thought, was a gamble — perhaps he could seek asylum at the Russian Embassy and be returned to the U.S. in a prisoner swap. Russia, he figured, was the center of the Communist world, and he’d read of U.S. soldiers in West Germany doing something similar.

“I know I was not thinking clearly at the time, and a lot of my decisions don’t make sense now, but at the time they had a logic to them that made my actions seem almost inevitable,” Jenkins recalled in his memoir, “The Reluctant Communist: My Desertion, Court-Martial, and Forty-Year Imprisonment in North Korea.”

On the night of Jan. 4, Jenkins abandoned his unit and walked across the border, known as the Demilitarized Zone, or DMZ. As day broke, he saw a guard standing near a guard post beyond an electrified, barbed wire fence. Jenkins yelled; the guard turned and his eyes widened, almost cartoonishly. Within moments, Jenkins was surrounded by eight to 10 North Korean guards, their rifles drawn. They grabbed him by the arms and hauled him into the guard post.

From then on, almost nothing would go according to plan.

For eight years, the North Korean government held him in a spartan room with three other American defectors — Jerry Wayne Parrish, 19; Larry Abshier, 19; and James Dresnok, 21. Authorities forced them to memorize ideological tomes by Kim Il Sung, the country’s founder-president, and beat them when they slipped up. Bit by bit, they learned to speak Korean. Their relationships began to fray — Jenkins and Dresnok didn’t get along at all — and when their North Korean minders weren’t beating them, they often got in fistfights themselves.

In 1966, the four Americans escaped their minders, ducked into the Russian Embassy in Pyongyang and requested asylum. The Russians turned them down, and Jenkins had a sudden, dreadful realization: “I’d never get out of North Korea. And more than likely I’d be there till I died.”

In 1972, the North Korean government declared them citizens, gave them separate homes, and for the next several years, forced them into odd jobs. Mainly, the four men served as actors playing evil Americans in propaganda productions; they taught English at a military academy.

In 1980, Jenkins acquired a wife: North Korean authorities moved into his home Hitomi Soga, a 21-year-old Japanese woman who had been abducted from Japan two years earlier. Weeks later, the two were married. Eventually, buoyed by their mutual hatred of North Korea, they fell in love.

“I knew how badly my wife missed Japan, and so it wasn’t long after we were married that I asked her what the Japanese word for ‘good night’ was,” Jenkins recalled in his memoir. “Thereafter, every night before we went to bed, I would kiss her three times and tell her, ‘Oyasumi.’ Then she would say back to me, ‘Good night,’ in English.”

“We did this so we would never forget who we really were and where we came from,” he said.

They had two daughters: Mika, now 34; and Brinda, now 32. Generally, their lives were better than those of ordinary North Koreans. In the 1990s, as famine gripped the country, the government gave Jenkins and his family rice, soap, clothing and cigarettes every month. “I got put on rations,” Jenkins recalled. “A regular Korean got none.”

Across the country, millions of people starved to death.

Still, he despaired. The cigarettes were painful to smoke, and the rice was full of bugs. One day, a government agent tied him up and instructed Dresnok, who lived in a neighboring house and also acted in propaganda films, to beat him until his teeth protruded from his lips. He said Dresnok seemed to enjoy it. Another time, an official noticed a U.S. Army tattoo on his arm and ordered Jenkins to a hospital, where a doctor cut it off without anesthetic.

Cadres watched the procedure and laughed as Jenkins screamed. “It was hell,” he recalled.

He tried, and often failed, to form a mental map of how the country worked. He came to suspect that the North Korean government was training his daughters as spies, and that North Korea had enslaved dozens more Americans — prisoners in Vietnam, sent by the North Vietnamese to Pyongyang as gifts. He deduced that high-ranking North Korean officials seemed to maintain luxury properties in Switzerland for use as refuges in case of a popular uprising or military conflict.

One day, he witnessed dogs digging up a mass grave near his home; soon afterward, a group of soldiers killed all the dogs in the neighborhood.

He learned one thing for certain: Frank conversations about the country’s conditions could prove fatal. “You can’t bring your neighbor over for a drink,” he recalled. “Why? People start drinking, they start talking. People disappear. And when one doesn’t disappear, they know he’s the one who squealed.”

In 2002, everything changed. Kim Jong Il — Kim Il Sung’s son and successor — admitted that North Korea had abducted 13 Japanese citizens and announced that five, including Soga, Jenkins’ wife, would be released. In Japan, Soga’s story of her romance with the American soldier became a media sensation — a twisted tale of star-crossed lovers — and two years later, in a diplomatic high-wire act led by Japan’s then-prime minister, Junichiro Koizumi, North Korea let Jenkins and their daughters go.

The U.S. Army court-martialed Jenkins for desertion, and he spent 25 days in a military prison.

Since Jenkins’ release, he has lived on Sado Island, his wife’s hometown — a place so remote that it traditionally served as a place of exile for dissidents. They live in a small house not far from where Soga was snatched by North Korean agents. She works for a nearby nursing home; their daughter Mika, who lives at home, teaches at a kindergarten. The other daughter, Brinda, lives in the city of Niigata, an hour’s ferry ride from Sado Island.

Abshier died in North Korea of a heart attack in 1983, and Parrish died of kidney disease in 1998. Dresnok died in 2016, though Jenkins hadn’t heard the news and said he didn’t care.