An American soldier supporting the U.S. counterterrorism mission in Afghanistan known as Operation Freedom’s Sentinel was killed in action in... 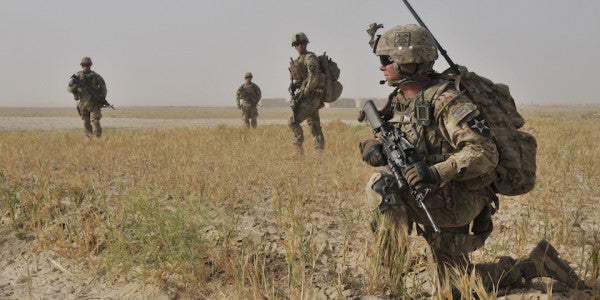 An American soldier supporting the U.S. counterterrorism mission in Afghanistan known as Operation Freedom’s Sentinel was killed in action in the eastern part of that country late Saturday, a U.S. official announced.

The soldier was killed while conducting operations against the Islamic State’s offshoot in Nangarhar province, U.S. Navy Capt. Bill Slavin, a U.S. Forces-Afghanistan spokesman said in a statement posted to Twitter.

American troops have been assisting Afghan forces battling the regional branch of ISIS, known as Islamic State-Khorasan Province, since early last year when the U.S. designated the group a foreign terrorist organization.

Last month, the jihadis claimed responsibility for roadside bomb blast that wounded three U.S. soldiers also in Nangarhar, where the group has established a foothold, mainly in the Achin district.

Since 2016, at least 12 of the group’s leaders have been killed and the overall number of fighters has been reduced from between 2,000-3,000 to approximately 700, according U.S. Forces-Afghanistan.

Despite their losses, the ISIS loyalists have claimed responsibility for high-profile attacks throughout the country, including the storming of Afghanistan’s largest military hospital in Kabul, which killed dozens last month.

The soldier killed Saturday has not been identified. It is the first U.S. combat fatality in Afghanistan this year. Sgt. 1st Class Robert R. Boniface, 34, of San Luis Obispo, Calif., died March 19, in Logar province from a noncombat incident.

Ten U.S. servicemembers were killed in hostile situations in Afghanistan in 2016, according to the website icasualties.org, which tracks those numbers. The last three as the result of suicide bomb attack during a Veterans Day 5K run at Bagram Air Field in November. Two American civilian contractors were also killed in the blast, which the Taliban claimed.