An Army veteran once cast as a Charles Manson-like figure who led a group of bored soldiers in schemes to... 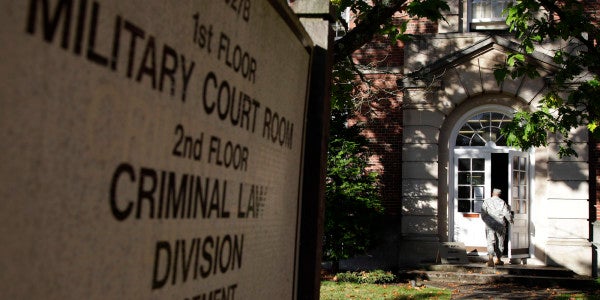 An Army veteran once cast as a Charles Manson-like figure who led a group of bored soldiers in schemes to murder Afghan civilians may get a new trial.

In a long-running appeal, a military court has ruled that former Staff Sgt. Calvin Gibbs may present new evidence that could get him another day in court.

Gibbs, a Montana native who is serving a life sentence for masterminding the murders of three Afghan boys in 2010, won the latest legal round at the U.S. Court of Appeals for the Armed Forces.

His attorney said he made a formal request Wednesday for a “totally new trial” or an immediate hearing to examine new evidence in the case.

Two of Gibbs’ former teammates now are offering statements supporting his argument that at least one of the killings took place in legitimate combat.

The Army is “delaying justice for Calvin, but unless they go to the Supreme Court — unlikely — the delay is over,” said Phil Stackhouse, Gibbs’ attorney.

If Stackhouse succeeds in getting a new trial for Gibbs, the Army will have to remake its case that Gibbs was the dark figure behind a plot to slay innocent Afghans.

In June, nearly five years after Gibbs’ conviction, the Army Court of Criminal Appeals said that it wanted to know why some witnesses in the case were granted immunity and others were not and whether those decisions were made “in a discriminatory or improper fashion.”

Prosecutors asked the U.S. Court of Appeals for the Armed Forces to overrule the decision, saying the lower court exceeded its authority.

“The Army Court’s exercise of judicial power in this case is clearly and indisputably in error,” federal prosecutors said in a petition.

But in the latest twist, the U.S. Court of Appeals for the Armed Forces disagreed, saying in a one-page ruling that the government’s motion was “denied as moot.”

With appeals now all but exhausted for the U.S. government, Stackhouse said Gibbs will have the chance not only to air his new evidence but to “discover what evidence the government has been hiding and expose the strategic use of immunity to gain an advantage” in the case.

During oral arguments in March, Anne Hsieh, an attorney for the government, argued that Gibbs’ request for a post-trial hearing should be denied, citing “overwhelming evidence” to support his conviction. She said any new evidence would show only a “minor inconsistency” and that even if they were considered as possible evidence, it was unlikely there would be a different verdict.

Gibbs was the highest ranking of 12 soldiers from a small unit who came home accused of criminal misconduct during their deployment with a Stryker brigade from Washington state’s Joint Base Lewis-McChord.

They operated out of a neglected base in Kandahar province, where soldiers admitted that they smoked marijuana, shot dogs during patrols and destroyed one of their own housing units when one of them shot a grenade at it.

The Army found them after Gibbs and five soldiers assaulted a private after he threatened to tell superiors about marijuana use at their outpost.

Several of Gibbs’ platoon mates said in court that he concocted schemes to slay innocent Afghans and provided “off the books” weapons for soldiers to carry out his plans. His “kill team” gained international attention after photographs showed them posing with Afghan corpses.

During court proceedings in 2010 and 2011, Gibbs said he’d shot one Afghan who had fired at him first. After killing the man, Gibbs said, he cut a finger off the body because he was “pretty pissed off” that the man had tried to kill him.

Gibbs, a veteran of deployments to Iraq, testified that he was trying to look tough for junior soldiers on their first combat missions.