On Monday, Exercise Max Thunder kicked off to “enhance interoperability” between the US and South Korean forces, according to U.S.... 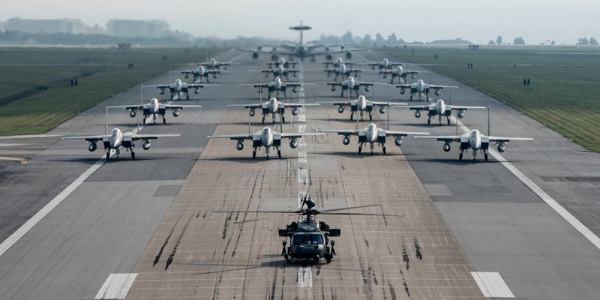 On Monday, Exercise Max Thunder kicked off to “enhance interoperability” between the US and South Korean forces, according to U.S. Pacific Command. The event goes until Apr. 28.

Although the exercise is regularly scheduled and was planned months ago, North Korea often sees such training events as a prelude to war and responds with threats. On Tuesday, a senior North Korean official called military exercises between its southern neighbor and the U.S. an “aggressive war drill.”

The official also warned that “thermonuclear war may break out at any moment.”

The U.S., however, maintains that Max Thunder is a non-threatening training event that will enhance friendship between the South Korean and American personnel.

“This exercise will rigorously test our aerial combat capability and highlights the ironclad commitment between the U.S. and (South Korea), and the multifaceted capabilities we possess in this theater,” Lt. Gen. Thomas W. Bergeson, 7th Air Force commander, told Yonhap News.