"It's like putting together a national baseball team by having professional players practice alone instead of together," 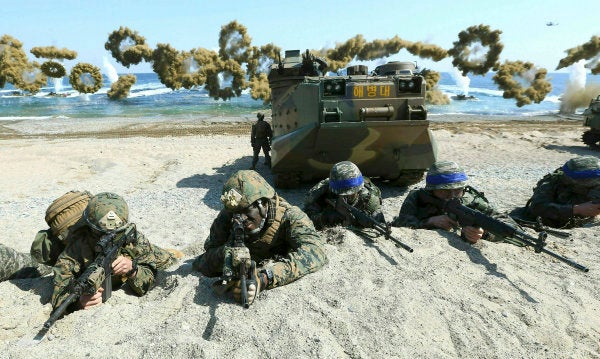 TOKYO — In recent years, thousands of U.S. and South Korean soldiers met face-to-face on a mock battlefield to prepare for a potential attack from North Korea.

Now, after President Donald Trump scrapped the biggest joint exercises, the bulk of the newly designed “Alliance” drill taking place through March 14 will involve senior officers sitting in front of computers for what's known as a “command post exercise.” While the army won't provide exact figures, many soldiers who took part in previous years will be on the sidelines.

“It's like putting together a national baseball team by having professional players practice alone instead of together,” said Kim Ki-ho, a former colonel in South Korea's army who oversaw military operation planning at the Combined Forces Command.

Kim said the first week of the discarded exercises — known as Key Resolve and Foal Eagle — was typically spent training for defense against an attack, and the second week on launching counterattacks. The benefits to officers and enlisted personnel came from being able to see how the overall command structures worked, he said.

''If you conduct exercises among battalion levels or under, you don't understand where you belong in the bigger picture,” said Kim, now a professor at Kyonggi University in South Korea. A battalion can typically involve 300 to 1,000 troops. The U.S. has about 28,000 troops in South Korea.

For Trump, the expense of the annual exercises outweighed any concerns about battlefield readiness — in line with his “America First” doctrine that has alarmed U.S. allies around the world. The timing of the decision, which came just days after he failed to reach an agreement on denuclearization with Kim Jong Un in Vietnam, has also been criticized as handing a win to North Korea.

Kim wanted Trump to ease most sanctions against North Korea in return for dismantling a key nuclear production complex. The U.S., in turn, wanted Kim to take more action on hidden nuclear facilities, as well as warheads and intercontinental ballistic missiles that could deliver them to the U.S. homeland.

North Korea has long criticized the U.S.-South Korea joint military drills, calling them a “preparation for invasion.” A key goal of the regime has been to weaken the U.S. military's influence in the region by driving wedges between Washington and its military allies Japan and South Korea.

“In general, it seems short-sighted as a unilateral concession that could be perceived as weakening resolve,” said Daniel Pinkston, a lecturer at Troy University in Seoul, who used to serve as a specialist in Korean affairs with the U.S. Air Force.

Foal Eagle was launched in 1961 at the height of the Cold War, and for years it involved the bulk of South Korea's armed forces and U.S. troops stationed in the country. The main purpose was to test out their latest weapons and tactics against North Korea, which has thousands of artillery pieces trained on Seoul and hundreds of missiles that can hit every part of Japan.

Since most U.S. troops are stationed in South Korea for about a year, it is also the only time for most of them to do real-world, widespread training with their allies. Soldiers and equipment from bases in the U.S. and Japan at times were integrated into the operations, while a U.S. aircraft group has sailed offshore for many incarnations.

Trump has repeatedly expressed frustration with the open-ended troop deployment, saying after his meeting with Kim in June that he would “like to bring them back home. But that's not part of the equation right now.” After his latest meeting with Kim, Trump lamented the price tag of the exercises and called on South Korea to pay more.

“We spent hundreds of millions of dollars on those exercises, and I hated to see it,” Trump said. “I thought it was unfair. And, frankly, I was, sort of, of the opinion that South Korea should help us with that.”

Some experts agree that the U.S. and South Korea could maintain readiness without holding such large military exercises.

William McKinney, a retired Army colonel who spent more than 40 years involved in U.S.-Korea military relations, said some of the more expensive and provocative parts of past drills — nuclear-capable air and naval craft such as B-52 bombers, F-22 fighters and ballistic missile submarines — aren't necessary for ensuring combat readiness.

“You can ensure troops are maintaining readiness more than adequately in smaller exercises,” McKinney said by telephone from Honolulu. “What is important is stressing the leadership — your majors, your colonels, your generals — and their readiness to command and control their battle units.”

The leader of U.S. Forces Korea, Gen. Robert Abrams, told senators during his confirmation hearing in September that Trump's decision to freeze drills — which came after the president's first summit with Kim last year — had caused a “degradation to the readiness” of forces even as he called it a “prudent risk” to improve ties with North Korea.

“It is important for professional armies to train and maintain to a standard of readiness,” they said in a joint statement on Sunday. “These exercises are crucial in sustaining and strengthening the alliance.”

The alliance serves to maintain U.S. influence in Asia and defend against Kim, who hasn't yet committed to giving up nuclear weapons and whose country has threatened to use them to “sink” Japan and reduce the U.S. to “ashes and darkness.” Beyond deterring North Korea, the U.S. military presence on the peninsula also serves as a check on China's rising might.

“We don't conduct these exercises as a payment to Korea for which we need to be repaid,” said Daniel Sneider, a lecturer in international policy at Stanford University who specializes in Korea-Japan relations. “These are for our own strategic purposes.”

SEE ALSO: North Korea Has Rebuilt Part Of A Missile Site It Promised Trump It Would Dismantle