ouching down before dawn, Somali “Lightning” commandos climbed out of U.S. military helicopters and carefully advanced in the dark toward... 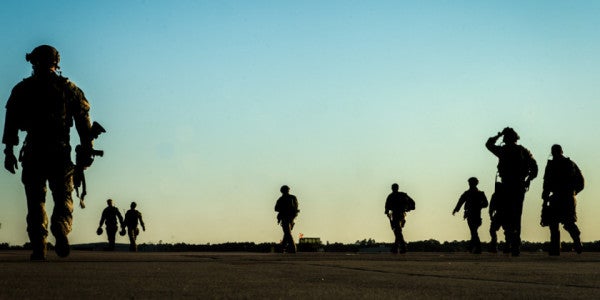 ouching down before dawn, Somali “Lightning” commandos climbed out of U.S. military helicopters and carefully advanced in the dark toward a ramshackle compound tucked into muddy farmland dotted by banana trees.

U.S. surveillance had monitored the site for days after an intelligence tip signaled the location of Moalin Osman Abdi Badil, the suspected leader of an al-Shabab terrorist cell linked to plots against U.S. forces and their allies in Somalia.

A team of Navy SEALs joined the Somali soldiers as they slipped toward the low-slung buildings, hoping to surprise the militants. But guards heard or spotted the raiders and a fierce firefight lighted up the night.

The Pentagon says the militants killed a Navy SEAL, Senior Chief Special Warfare Operator Kyle Milliken, 38; and wounded two other SEALs in the May 5 attack near Barii, about 40 miles west of the capital, Mogadishu.

The incident not only marked the first U.S. combat death in Somalia since the infamous Blackhawk Down battle in 1993; it also underscored the risks as President Donald Trump, like President Barack Obama before him, increasingly relies on the Pentagon’s Special Operations Command to hunt militants around the globe.

Five of the six members of the U.S. military killed by hostile fire this year were from one of the special operations ground forces: Navy SEALs, Army Green Berets or 75th Ranger Regiment. So were more than half the 33 U.S. combat fatalities since 2015.

Yet the 8,600 special operators overseas are only a tiny fraction of the nearly 200,000 U.S. troops deployed abroad.

The danger was highlighted again last week when three Navy SEALs were wounded in an assault on a militant stronghold in Marib in western Yemen. When a firefight broke out, the U.S. commandos called in airstrikes from an AC-130 gunship.

The raid was aimed at grabbing cellphones, computers and other devices used by al-Qaida in the Arabian Peninsula, U.S. officials said. The push for intelligence comes amid concerns that the terrorist group is planning new attacks on Western targets, including commercial aircraft.

The assault was typical for the special operations forces. They work closely with the CIA and other spy services to collect intelligence while they find, capture or kill Islamic State leaders, bomb-makers and operatives in Iraq and Syria, hunt al-Qaida-linked militants in Somalia and Yemen, and fight an Islamic State affiliate in Afghanistan.

The number of raids they conduct is classified. But several are known to have gone terribly wrong.

The Pentagon is still investigating the deaths of two Army Rangers killed in a nighttime assault in eastern Afghanistan in late April. Officials say they may have been killed by friendly fire during a three-hour battle with Islamic State.

The Pentagon also is investigating a raid that Trump personally approved shortly after he took office. In late January, a Navy SEAL was killed on a night mission in Yemen that went awry. U.S. airstrikes aimed at militants killed more than a dozen civilians, including women and children, and a $70-million U.S. aircraft was destroyed.

Sen. John McCain, R-Ariz., chairman of the Senate Armed Services Committee, subsequently called the raid “a failure,” disputing White House claims that it was “highly successful” because the SEALs had collected useful intelligence.

With special operations forces now posted in more than 80 countries, the ever-increasing set of missions and uptick in casualties give pause even to some military experts and veterans who support the expanding role.

“You talk about mission creep — this is strategic mission creep all over the world,” said retired Lt. Gen. Mark Hertling, a 37-year Army veteran. “Special operations just isn’t sized to do that.”

Gen. Raymond Thomas, who heads Special Operations Command, apparently agrees. He told the Senate Armed Services Committee this month that his forces are stretched thin, with little downtime between deployments, a situation he called “unsustainable.”

“Rather than a mere ‘break-glass-in-case-of-war’ force, we are now proactively engaged across the battle space,” Thomas said.

The Pentagon says the rapid rate of deployments has taken a toll, and not just in recent casualties.

Green Berets from 4th Battalion, 10th Special Forces Group out of Fort Carson, Colo., secure their jump gear and prepare to board a KC-130 aircraft at the Stennis Space Center.U.S. Air Force photo

“There’s been misuse and overuse of our special operation forces in recent years,” said Rep. Scott Taylor, R-Va., a former Navy SEAL. “We need to be more discriminatory in how we use these forces because, in many ways, the future of the command depends on it.”

The Trump administration, like the Obama administration, sees special operations as far easier to sustain than the vast U.S. military bases, housing tens of thousands of American troops and contractors, that once dotted Iraq and Afghanistan. Both the cost and the casualties have plummeted.

In most countries, special operations teams are chiefly assigned to train and coordinate with local government security forces. They are reportedly embedded with local soldiers on the front lines in only a crucial handful of countries where terrorist groups operate openly.

“U.S. policy is trying to shift the fighting burden to locals, which means we have to train pro-Western — or at least anti-jihadist — locals to do the fighting and dying,” said Christopher Harmer, an analyst at the Institute for the Study of War, a nonpartisan public policy group.

That means relying on special forces who are “used to working in smaller numbers in austere conditions without a lot of friendly support in close proximity,” he added.

A year ago, for example, about 50 special operators were in northern Syria. Now more than 500 are working with armed groups — some of them opposed to the others — in the multi-sided civil war: Turkish soldiers, Kurdish militias and a coalition of Arab forces in a planned offensive against Raqqa, Islamic State’s self-declared capital in Syria.

In Iraq, special operations forces are working with Iraqi units trying to clear the Islamic State from their redoubt in Mosul, calling in airstrikes and advising on tactics. Hundreds more play support roles in staging bases.

Special Operations Command was established at MacDill Air Force Base in Tampa, Fla., after the failed attempt to rescue 52 U.S. Embassy staff held hostage in Iran in 1980. The debacle embarrassed the Pentagon and contributed to President Carter’s loss in the election that year.

The turning point for the command came after the terrorist attacks of Sept. 11, 2001. As the George W. Bush administration prosecuted what it called a global war on terror, the command’s experience in clandestine operations and guerrilla warfare helped it track terrorist networks in the Middle East, the Horn of Africa and elsewhere.

Their light but deadly footprint especially appealed to Obama, who was elected after promising to end America’s wars in Iraq and Afghanistan. He gradually cut the number of conventional troops in those war zones from 150,000 to 14,000.

But Obama vastly expanded the role of elite units, as well as drone aircraft, in the so-called shadow wars. During his tenure, Special Operations Command saw its budget balloon and its overall strength grow by more than 15,000 people while most of the Pentagon was being trimmed.

Commando teams conducted counter-terrorism missions in at least six countries under Obama. Among them: the CIA-led raid by Navy SEALs that killed Osama bin Laden in Pakistan in May 2011.

Trump also has embraced special operations. He is considering sending more forces to Syria and Afghanistan to play a larger role in those wars, officials say, and has given commanders greater authority to launch attacks in Yemen and Somalia without White House approval.

Thomas, the head of Special Operations Command, warns that even the military’s elite forces have their limits in a world wracked by terrorism.

“We are not a panacea,” he said. “We are not the ultimate solution to every problem.”