Trump Should Follow His Instincts And End The War In Afghanistan

Afghan officials have begun counting ballots from the country’s parliamentary elections, even as a suicide bomber targeted the election headquarters in Kabul... 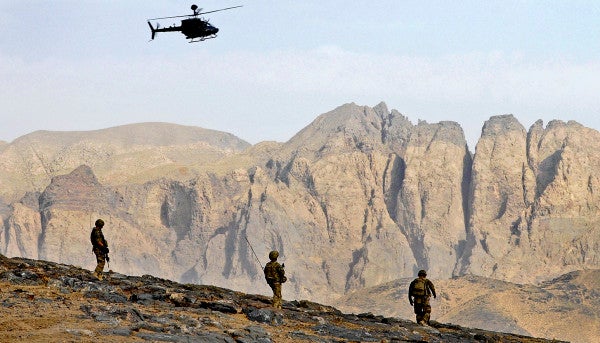 Afghan officials have begun counting ballots from the country’s parliamentary elections, even as a suicide bomber targeted the election headquarters in Kabul early Monday morning. Voters in the Kandahar province of Afghanistan went to the polls this past Saturday, October 27, delayed by a week due to an insider attack that killed regional police chief Gen. Abdul Raziq and intelligence chief Gen. Abdul Momin, while wounding Gen. Jeffrey Smiley, the head of NATO forces in southern Afghanistan. The rest of the country voted last weekend, and election day violence killed at least fifty people.

Despite these attacks on the heel of a very violent election season—in which ten candidates were killed—the Pentagon continues to insist that U.S. efforts in Afghanistan are working: “The ANDSF [Afghan defense forces] security is working,” Col. Rob Manning said last Monday, October 22. “By all accounts, our assessment is the South Asia strategy is working.” This is wrong, and no one should buy it. The strategy is not working and it’s long past time we end this war.

The Pentagon argues that the elections occurring, combined with the fact that attacks are down by two-thirds compared to the 2010 elections, is proof that progress is being made. But the elections were delayed by three years due to security concerns, and 2010 was the highpoint of the war. There were more than one hundred thousand troops present then, as opposed to the ten to fifteen thousand fighting there now . Of course, insurgent violence is going to drop when the occupying force drastically decreases its numbers.

These shallow evasions aside, there is little enduring progress in Afghanistan and civilian deaths in the first half of 2018 are greater than at any point in the previous nine years. As Congressman Jim Banks (R-IN) noted in National Review, the government’s own analysis of the security situation has remained the same for the previous five years. “Each assessment…has recorded essentially the same threat level. The opening line of the threat assessment in November 2013’s report stated, ‘The convergence of insurgent, terrorist, and criminal networks is pervasive and constitutes a threat to Afghanistan’s stability,’” he writes.

What did the June 2018 report say? “Afghanistan still ‘faces a continuing threat from an externally supported insurgency and the highest regional concentration of terrorist groups in the world. These pervasive insurgent, terrorist, and criminal networks constitute a threat to Afghanistan’s stability.’”

By the government’s own evaluation, the security situation has remained dire for the previous five years. Yet, the Pentagon insists time and again our approach is working. It makes perfect sense that the Pentagon would spin the narrative in such a way: there is no reason for them to be honest. U.S. foreign policy in general has been operating on autopilot for many years now.

University of Birmingham professor and security expert Patrick Porter has argued that habitual ideas among the foreign policy elite has made American grand strategy remarkably hard to change. These leaders have bought wholesale into “collective ideas that come to seem obvious, axiomatic choices made from unexamined assumptions.”

In the context of Afghanistan, these unexamined assumptions include the oft-repeated assertion that an American presence is necessary to prevent another 9/11-style attack. But this myth of the terrorist safe haven has been debunked by Chatham House senior fellow Micah Zenko, among others. An intelligence community that properly shared information, stripped of its parochialism, could have prevented 9/11. Thousands of troops as part of an indefinite occupation are not necessary.

Another unexamined assumption is that the United States can successfully build an Afghan state capable of providing for its own security. Of course, the record of this seventeen-year war speaks for itself. External actors will not be able to rebuild Afghanistan.

Corruption (which is legendary in Afghanistan and has thwarted U.S. efforts from the beginning), poverty and violence undercut any efforts at developing state capacity. But without it, corruption, poverty and violence cannot be properly addressed. It’s a self-reinforcing cycle that no amount of American investment is going to be able to change. The United States may be able to prop up a weak Afghan government for some time, but we cannot make it stand on its own two legs.

President Donald Trump’s private thoughts on Afghanistan reportedly mirror his previous campaign rhetoric, expressing a desire to exit the conflict, but he has been tempered by the Pentagon and the establishment members of his administration. And he faces no political cost from continuing the status quo. While Afghanistan is not a popular conflict, it is largely not on any voter’s radar in the upcoming midterms, nor will it be in 2020.

Therefore, the only chance of ending this war anytime soon is if Trump is willing to bite the bullet and follow his instincts. He should do so. No one else should die on our watch.

Jerrod A. Laber is a DC-based writer and journalist, and a contributor for Young Voices. His work has been published in Defense One, The American Conservative, and the Columbus Dispatch, among many others. Follow him on Twitter @JerrodALaber.