The U.S. military and its NATO partners have been looking to reassert their presence in Europe in the wake of... 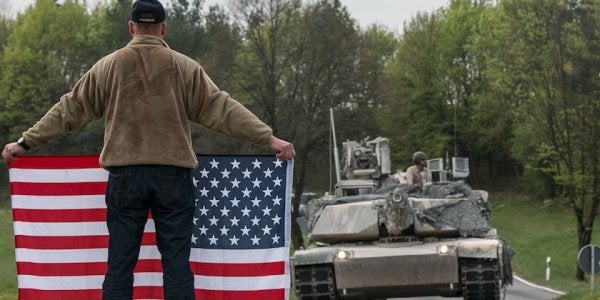 The U.S. military and its NATO partners have been looking to reassert their presence in Europe in the wake of Russian action in Crimea.

NATO has deployed multinational units to Eastern Europe, and the U.S. Army has been looking to boost its armor for more rotational deployments. Armored units on the continent are also expanding their training repertoire.

Soldiers from the 2nd Armored Brigade Combat Team, from the 1st Infantry Division, arrived in Europe in September 2017, with roughly 3,300 personnel, 87 tanks, 125 Bradley fighting vehicles, and 18 Paladin self-propelled howitzers for a nine-month rotation at locations in Poland, Germany, Romania, Hungary, and Bulgaria.

When they disembarked in Gdansk, Poland, it would be “the first time two armored brigades transition within the European theater sending a full complement of soldiers and equipment into Germany and Poland in support of Operation Atlantic Resolve,” Eastern Europe operations command spokesman U.S. Army Master Sgt. Brent Williams said at the time.

The unit's rotation is also concluding with something of a first. Between April 22 and April 25, the 2nd ABCT carried out a tactical road march with over 700 vehicles on public roads between the Grafenwoehr and Hohenfels training areas in southeast Germany — the first time the exercise has been done at the brigade level in 15 years, according to the Army.

The exercise was part of the Combined Resolve multinational exercise, which is taking place between April 9 and May 12 and includes personnel from 13 countries. The exercise is designed to give rotational brigades a graded culminating event in a realistic and complex training environment before they return to the U.S.

After a maneuver live-fire drill, the brigade was ordered to conduct the march to Hohenfels, where it would start preparing for the 10-day, force-on-force portion of the exercise.

The road march required only limited recovery operations and avoided major damage to roads and towns along the route, which the release noted was a significant accomplishment in light of the size of some of the vehicles involved.

Soldiers from the 2nd ABCT were joined by the Polish army's 12th Mechanized Division, and a number of local residents stopped to watch the procession.

A German family waved at the soldiers while a German man held a U.S. flag across his body. Others wore shirts or hats with U.S. Army printed on them or with unit patches. One local man, Ralf Rosenecker, and several of his friends set up a display of three remote-controlled tanks with U.S. flags, according to an Army release.

At the time, NATO said the planned deployments — which included U.S. troops to Poland and Germany, Canada, and the UK sending 1,000 troops each to Estonia, Latvia, and Lithuania — were strictly defensive, through Russia rebuked what it saw as an armed buildup by Western countries in Eastern Europe.

Rotational forces have continued to cycle through Europe, carrying out training exercises with partner forces there.

NATO itself is also looking at ways to increase its readiness and streamline its operations in Europe. NATO movements on the continent have been hindered by differing conflicting regulations and customs rules, differing road standards, and outdated infrastructure across member states.

In January, a convoy of U.S. Paladins traveling from Poland to exercises in southern Germany was briefly stranded, after German border police stopped the Polish contractors transporting them for violating transportation rules.

U.S. howitzers in transit from Poland to Germany stopped due to unsuitable conditions, Bautzen, Germany on Jan. 10, 2018.Rex Features/Associated Press

In March, NATO announced its new logistics command — is meant to ensure the quick movement of troops and material across Europe in the event of conflict — will be based in the southern German city of Ulm.

The EU has also said it is devising a plan for military personnel and equipment to move quickly across Europe in a crisis, avoiding border delays and bridges and roads too weak to handle military vehicles.

“Rosenecker said he was excited to see so many tanks because it had been over 15 years since such a large tactical road march was conducted on German roads,” the Army release said.

The U.S. deployed hundreds of tanks, trucks, and other military equipment, accompanied by about 4,000 troops, to Europe at the beginning of 2017. The deployment, part of Operation Atlantic Resolve, was meant to reassure U.S. allies in the face of what many of them perceived as Russian aggression.