An unarmed intercontinental ballistic missile was launched from Vandenberg Air Force Base early Wednesday to test the weapon’s reliability to... 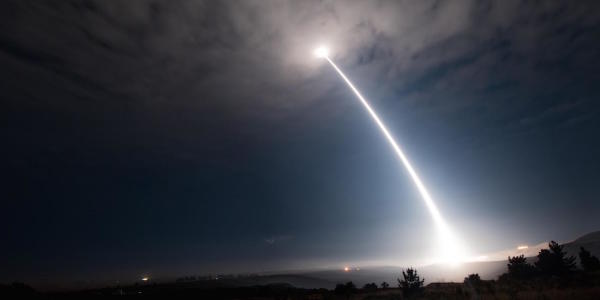 An unarmed intercontinental ballistic missile was launched from Vandenberg Air Force Base early Wednesday to test the weapon’s reliability to “defend against attacks on the United States and its allies,” the Air Force said.

The Minuteman III missile was fired at 2:10 a.m. local time from the base northwest of Santa Barbara, Calif., according to the Air Force Global Strike Command. The missile, equipped with a single test re-entry vehicle, traveled 4,200 miles to a test range near the Kwajalein Atoll in the Marshall Islands.

The strike command said the test was “not a response to recent North Korean actions.” Rather the launch “demonstrates that the United States’ nuclear enterprise is safe, secure, effective” and can protect against strikes, the command said.

The test comes after North Korea launched an intercontinental ballistic missile on Friday — the second in less than a month. The two-stage missile crashed off the coast of Japan’s northernmost island, Hokkaido. Independent defense analysts say such a missile may be capable of reaching California and other parts of the West Coast.

On Tuesday, Secretary of State Rex Tillerson said the U.S. government would agree to a dialogue with North Korea if it relinquishes its nuclear program.

“We are trying to convey to the North Koreans: ‘We are not your enemy, we are not your threat. But you are presenting an unacceptable threat to us, and we have to respond,’” he said.

The test is the fourth ICBM launched from the base this year.

“These test launches require the highest degree of technical competence and commitment at every level and provide critical data necessary to validate the reliability, accuracy and performance of the ICBM force,” Col. Dave Kelley, 576th Flight Test Squadron commander, said in a statement.

In February, a test missile was launched from the base. That missile was also equipped with a nonexplosive payload and traveled to the Marshall Islands.

Another test was conducted by the Air Force Global Strike Command’s team on April 26. Air Force officials said that launch was an operational test to show the country’s nuclear deterrent capability.

Days later, a third test missile launched from the base. The unarmed Minuteman III missile was launched just after midnight on May 3 from the base to test the weapon’s reliability and ensure an “effective nuclear deterrent,” according to the Air Force.