US troops are still ready to ‘fight tonight’ against North Korea despite canceled exercises, general says 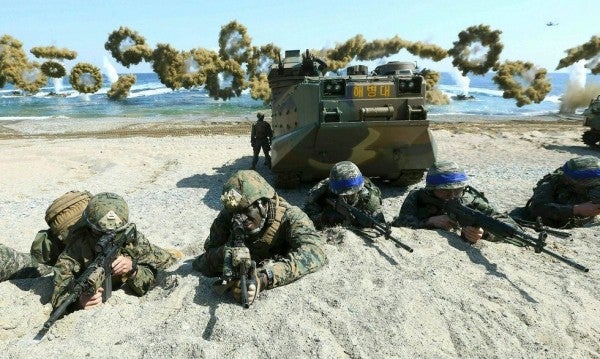 Army Gen. Robert Abrams, commander of U.S. Forces Korea and the 28,500 U.S. troops on the peninsula, is confident “that we still have the readiness required to be able to respond to any aggression,” Air Force Lt. Gen. David Allvin told the House Armed Services Committee.

If Abrams “felt like he was not able to achieve the readiness to accomplish the mission for which he was assigned, he would certainly come up voicing that, and we'd be hearing that,” said Allvin, director of strategy, plans and policy for the Pentagon's Joint Staff. “The overall posture remains strong.”

The large-scale Ulchi Freedom Guardian, Key Resolve and Foal Eagle exercises were suspended in 2018 by President Donald Trump as too costly and “provocative” to North Korean leader Kim Jong Un, who repeatedly branded them as practice for an invasion.

However, Allvin said that readiness has been maintained through more than 270 small-scale exercises with South Korean forces in 2019.

He said U.S. troops had conducted 273 of 309 “planned activities” with the South Koreans last year, giving the combined force the fighting edge to deal with any threat mounted by North Korea.

The readiness of U.S. forces is crucial as diplomatic leverage to maintain prospects for resuming long-stalled negotiations with North Korea on disarmament and denuclearization, said John Rood, the under secretary of Defense for Policy, but he cautioned that Kim's next steps are impossible to predict.

Kim broke off talks last year after the U.S. refused to ease sanctions ahead of negotiations, and the North has since resumed test launches of short- and medium-range missiles.

A top North Korean official last month also threatened that the U.S. would be receiving a “Christmas gift” that the U.S. and regional allies suspected might be the launch of an intercontinental ballistic missile or a resumption of underground nuclear testing, but there was no follow-through.

“We are watching very carefully what they are doing,” Rood said. “We don't know clearly the reasons why North Korea did not engage in more proactive behavior, which they seemed to be hinting they were planning to do in December.”

To maintain pressure on the North, the U.S. is continuing to ask South Korea to pick up more of the cost for the presence of U.S. troops on the peninsula, he said.

Rep. Adam Smith of Washington, the chairman of the committee, said the South Koreans are unlikely to agree to a five-fold increase in their share for the U.S. presence.

“How are we going to walk our way through that rather difficult situation?” he asked.

Rood did not give specific numbers, but said the U.S. objective is a “larger burden sharing of the costs,” and one that “doesn't unduly strain the alliance” with South Korea.